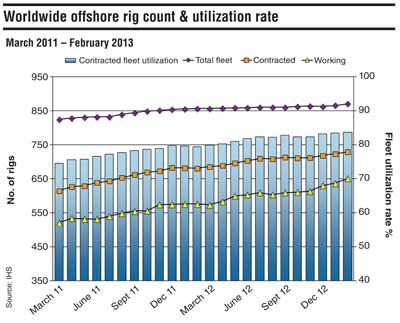 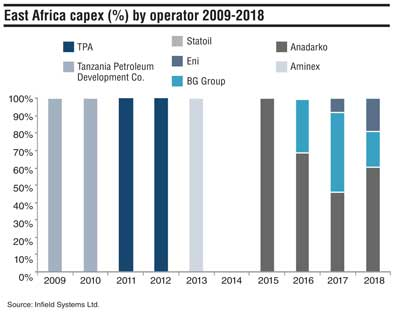 This month, Infield Systems looks at the emerging East African offshore market and the leading operators expected to drive development offshore Tanzania and Mozambique. In 2013, Infield Systems expects Aminex to account for 100% of capex in the region, installing pipelines on both the Kiliwani North (Nyuni block) and the Songo Songo fields, offshore Tanzania. No expenditure is forecast for Mozambique developments until 2015. Then the country is expected to become the key driving force behind development and capex spend in the region, with an expected 71% share of capex between 2015 and 2018. Post 2014, the market is expected to pick up dramatically, with development of the Anadarko-operated Prosperidade complex expected to commence offshore Mozambique. Prosperidade is expected to account for 45% of the regional offshore capex during the 2013-2018 timeframe. The operator is also directing expenditure toward Prosperidade Northwest during the period.