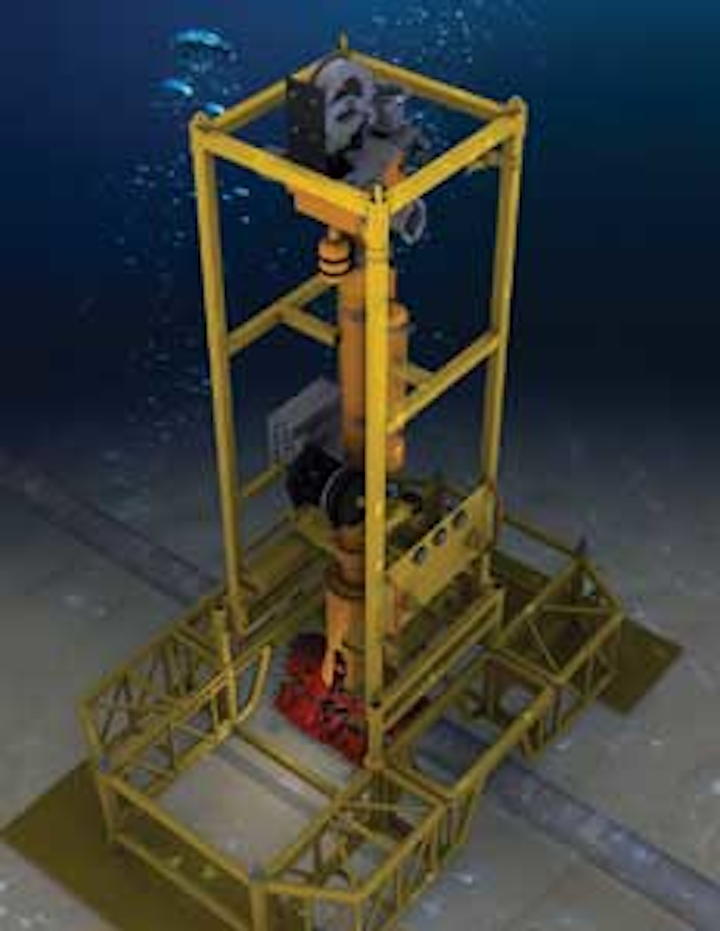 Subsea hot taps make possible a range of pipeline activities, including repair work, new section tie-ins, insertion of instrumentation, injection of chemicals, and creation of entry points for temporary isolation tools. In the most basic terms, hot tapping is the process of drilling a hole into a live (active) pipeline while keeping the line in production and all contents contained. Subsea hot tap operations are conducted with the assistance of a diving support vessel (DSV) to transport the necessary equipment and divers to the site. Because of the unique environmental challenges and logistics, substantially more equipment and personnel are required for a subsea pipeline intervention offshore than for a comparable intervention onshore.

A typical subsea hot tap follows a predictable sequence, beginning with preparation and pre-testing of the tapping assembly – consisting of a hot tap machine, permanent isolation valve, and hot tap fitting – on the deck of the DSV. The fitting generally is two mechanically bolted clamp halves. Once testing is complete, the tapping assembly is lifted from the deck and lowered with the clamp-halves open into position above the subsea pipeline. Divers deploy from the DSV to bolt the clamp-halves shut around the line. The annulus between the pipe and the clamped fitting is then leak-tested against the tapping machine with the valve open.

The actual hot tapping process begins when a pilot drill (in front of the hot tap cutter) makes a small hole in the pipeline. This hole stabilizes the larger cutter and holds onto the coupon (circular piece of cut pipe) once the primary tap is made in the line. Hot tap operations in shallow waters are preferably conducted in a horizontal mode at the 3 o'clock and 9 o'clock positions to ensure a flat, sideways tie-in connection. A vertical tap at the 12 o'clock position results in an upwardly protruding tie-in connection; this connection requires that large protective structures be installed over the tie-in works to protect against potential hazards from fishing and shipping traffic. These hazards are not present in deepwater, where a vertical tap is preferred because it is easier to vertically deploy the hot tap assembly. Following the tap, the permanent isolation valve is closed, and both the tapping machine and the coupon are returned to the DSV.

Many hot taps are performed for the purposes of a tie-in, in which case the spur line may then be readily connected to the permanent hot tap valve. The connection goes into service as soon as the valve is opened.

Historically, it has been standard practice to rely on divers well-versed in the bolting, rigging, valve manipulation, and other ancillary mechanical tasks required during subsea hot taps and tie ins. However, the tap itself – the crucial moment at which the pipeline is penetrated and cut – can be more challenging for divers, who, after all, are usually not hot tapping experts. Rather, professional divers are hired for their diving abilities, and any specialized work – which hot tapping is – must be rehearsed and then coached and guided via intercom by experienced tapping technicians aboard the DSV.

To further complicate matters, most current subsea machines feature a limited number of onboard sensors. The basic sensors that are available are visible to the divers but not to personnel on the DSV. As a result, divers and topside technicians both have limited ability to monitor or control the process.

There is also the issue of pipeline depth, bringing with it issues of accessibility and pressure. Divers are limited typically to projects in depths no greater than 300 m (984 ft), and often this poses no issue. However, subsea field infrastructures and new developments are descending ever deeper, in some instances as deep as 3,000 m (9,842 ft), far beyond diver limitations. Plus, as lines descend further, pressures exerted on them increase. Subsea pipelines routinely are constructed from harder, thicker materials to withstand these external forces. The use of new pipeline materials also increases the demand on tapping equipment and technicians. Given the amount of equipment and personnel required, it is vital that any subsea hot tap be performed as efficiently as possible, in a single deployment.

To address the multiple challenges of diver-based subsea hot tapping, T.D. Williamson (TDW) engineers set out to design a new remote-controlled system. They drew upon a wealth of field experience gained while performing more than 300 subsea hot taps during the past three decades. Engineers also looked to field-proven technologies, and made sure that any new designs relied on conventional marine spreads and installation methods. They also deemed it critical that the tapping operation be controlled directly by technicians, and that all subsea operations be continuously visible to technicians via a laptop computer aboard a DSV.

As a result of their design and development efforts, TDW recently introduced the Subsea 1200RC Tapping Machine. When pre-installed tees are in place, the system is totally diverless. If pre-installed tees are not in place, diver assistance is still needed for installation of the tapping assembly and the hot tap fitting. Regardless, the system allows an experienced topside technician to control the actual hot tap from a laptop (with an unprecedented view) aboard the DSV. Tapping accuracy, diver safety, and execution speed all dramatically improve.

Depending on internal pipeline pressures, the machine is equipped to operate in depths to 3,000 m (9,842 ft). Its design is based on the TDW Subsea 1000 Tapping Machine. Engineers added a remote control system around the Subsea 1000 to create a "topside-driven hot tap with passive ROV interface" device. The result is a lightweight, self-contained tapping machine with a built-in hydraulic and control system that is powered by a stationary ROV and operated by a technician from a remote laptop. As such, this system represents a major improvement over systems that require ROV arms to actuate individual valves.

The system's power needs – hydraulic and electronic – are provided by standard work class ROVs or similar subsea power units. Using its hydraulic power unit, the ROV stabs into a control panel on the tapping machine and holds on to a grabber bar during the tap. The ROV supplies closed- loop hydraulic power to engage a motor/pump unit on the tapping machine frame. This motor/pump unit sends hydraulics through a valve pack to the appropriate motor/hydraulic function.

All tapping machine functions are operated manually or automatically from a laptop using a specially developed software control program. These functions include running the feed and drive motors as well as engaging and disengaging the clutch. Sensors collect information on all critical operating parameters – including temperature, pressure, cutter position and proximity, cutter rotation speed, boring bar, and cutter movement – and transmit this data to the laptop.

A camera on the ROV can monitor key pressures via visual gauges. Supply and return hydraulic line pressures, as well as motor and drill pressures, are monitored by sensors. The tapping machine includes two onboard cameras for monitoring the rotation and position of the boring bar, along with the position of the clutch cylinder. The system also includes a number of built-in contingencies involving overrides by ROV mechanical interfaces and duplicate monitoring systems in the event a hydraulic, electronic, or mechanical failure occurs.

The Subsea 1200RC Tapping Machine was first tested and successfully deployed in 2011 during a hot tap operation in the Java Sea. Before the hot tap operation, a series of tests – including an integrated mock-up of the hot tap onshore – took place at the TDW facility (as well as the customer's offshore base) in Singapore. The tapping machine performed as planned during these tests. After the integrated system – made up of the tapping machine, isolation valve, and fitting (clamp) – was tested and approved, the operation began offshore.

At a water depth of 91 m (298 ft), a 16-in. tap was performed on an existing 28-in. gas pipeline. Technicians controlled the operation from a DSV, and the cut lasted approximately two hours. Flow through the gas pipeline continued uninterrupted while the operation was safely conducted. The tie-in connection point was ready when the line was later tied in. As a result of this project, gas can now be exported from the Kangean field to the existing gas export line. Rather than requiring an expensive new pipeline running hundreds of miles to the onshore receiving station, gas can be accessed at a fraction of the cost, saving valuable time and money.

The Java Sea project shows that subsea hot tapping can be successfully carried out by remote control without diver assistance. Topside technicians were in complete control of the hot tap machine and had an unprecedented view of critical subsea operations thanks to the continuous transmission of pressure and temperature data, as well as the rotation and movement of the pilot drill and cutter. Using this data, the technicians did not rely on divers to conduct the tap; rather, they controlled the operation remotely based on timely and accurate readings of cutting zone conditions. Reduced diver intervention, enhanced safety, and increased efficiency were key benefits for the customer.

By capitalizing on the benefits of the hot tap method, operators expanding their subsea pipeline networks to neighboring fields can meet the demand for oil and gas safely, rapidly, and economically. Success of the Subsea 1200RC Tapping Machine – specifically, the ability to automate the hot tap process – represents a significant advance toward the long-term objective of developing a completely diverless hot tap system.

This new approach effectively separates man from machine, which in itself has major safety implications, particularly in potentially hazardous emergency situations requiring immediate line intervention and repair. Additionally, if the hot tap is controlled remotely, divers would no longer work in shallow water or be affected by the adverse environmental conditions often found in wave breaking zones and shore approach areas. Nor is this advance limited to offshore. The benefits of a remote-controlled tapping system are likely to impact both offshore and onshore operations.