Small surges in pressure have typically been used for pipeline integrity management in applications such as leak detection. Large surges are more often viewed as an unwanted phenomenon. 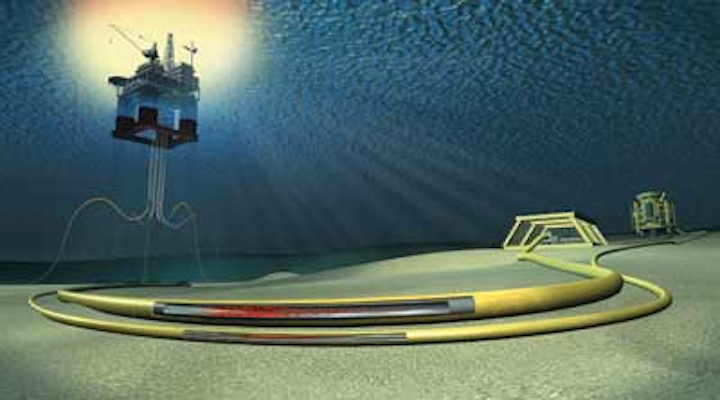 Small surges in pressure have typically been used for pipeline integrity management in applications such as leak detection. Large surges are more often viewed as an unwanted phenomenon.

However, extensive tests and trials with varying blockage types and in different environments have shown that sizeable pulses can be applied to locate and removing blockages in hydrocarbon pipelines.

Blockages can affect risers, flowlines, pipelines, umbilicals, PLETs (pipeline end terminations), and manifolds. Multi-purpose pipelines convey a number of fluids with a range of chemical properties, and this diversity can often result in build-up of deposits on the pipe walls, eventually clogging the line. Blockages can restrict flow and also prevent delivery of critical chemicals to subsea facilities. A build-up of wax, scale, asphaltene, or hydrates will severely affect production and hamper profitability of the field.

Controlled pressurization, coiled tubing intervention, and pipeline replacement are the methods normally used to re-establish flow. However, these types of remediation can incur high cost, and there can be complications when the blockage is a long distance away.

Replacing the pipeline is usually a last resort, costing anything from $5-200 million and taking six to 24 months to complete. The process is normally performed without retrieving the blocked line, posing a future decommissioning problem as lines have to be rendered free of hydrocarbons for retrieval.

Paradigm Flow Services developed Pipe-Pulse to remediate supply and production conduits using pressure surges which are "fired" along a fluid line in rapid succession. The remote, non-intrusive method can locate and remove blockages in long distance pipe-work up to 30 mi (48 km). It has been used to remediate umbilical cores up to an internal diameter (ID) of 20 mm (0.8 in.) and pipelines with 150-mm (5.9-in.) ID. It has also freed blockages over 16 km (9.9 mi) from a pipeline access point.

Proprietary algorithms determine the optimum wave structure for each pulse, of which there are potentially millions generated for each particular job. The unit then physically creates and injects the manufactured pulse into the pipeline. The system can operate at 10,000 psi (689 bar) to achieve a flow of 5 bbl/min, and is certified for use in Zone 2 hazardous areas.

The system can remove persistent blockages within days. The system is designed to be connected on the topsides of the host platform through either the pig launcher or the umbilical termination unit. This method minimizes HSE exposure, reducing the requirement in shallow water applications for diver intervention programs, and diver intervention into lines which may have trapped pressure.

Consideration must also be given to removal of the blockage debris, depending on the subsea infrastructure. It is sometimes possible to push the blockage to a larger flowline and circulate out. However, in some instances it may be necessary to overflush with dissolving chemicals once a bypass has been achieved, or bring on flow from a well in order to flush the debris back to surface.

To ensure the pulsing process does not over-stress the pipe, the pressure history at the blockage, pipe wall geometry, and condition as well as external constraints are all taken into account in determining the optimum pulse criteria.

Simulation predicts pressures and strains along the whole of the pipe (up to the blockage) and determines the maximum permissible base pressure allowed during pulsing. This data can then be put into the control system, ensuring that line-packing is not allowed to proceed beyond safe limits.

Engineers control the length and pressure of the pulse during operations allowing energy to be transferred into the pipeline in a safe and manageable way, and ensuring that pulse amplitudes are below the maximum stress and fatigue endurance limit.

Paradigm Flow Services has implemented Pipe-Pulse in various regions of the world. The company recently secured four contracts in the UK, US, West Africa and Southeast Asia. Each region provides a different set of challenges in the blockage material type and field environment, but the technology has proven to be adaptable to parameters. Trials have also been performed to help refine the optimum performance of pressure surges on various types of blockage. The size, shape, and frequency of the pulse can have different effects depending on blockage characteristics.

The system was recently tested on simulated asphaltene blockages of various bitumen and wax compositions in 6-in. (15-cm) diameter pipe. The bitumen used in the trial was 10/20, the hardest grade which on land withstands very heavy traffic loads, and is also used for airport runways. The 100% bitumen blockage was removed within 25 minutes of application, leaving minimal residual debris in the spool piece. Further trials were performed where the bitumen plug was mechanically held in place. This was to simulate longer distributed blockages up to 2 km (1.2 mi) long. In this case, one hour of pulsing proved sufficient to cause cohesive failure within the blockage allowing a flow path to develop.

The trial proved that the technology can remove simulated asphaltane blockages quickly, and develop flow paths through longer distributed blockages which have "bridged-off" to a complete restriction. The bitumen-based blockages were likely to have stronger intermolecular structure than the asphaltane deposition in the field, providing a more arduous testing ground for the use of pressure surges to tackle this type of restriction.

One operator had tried various other conventional methods on a North Sea field. A 15-km (9.3-mi) flowline had suffered a persistent blockage for 11 years, with a loss of production estimated at 350 b/d. The system cleared and flushed the line within six hours.

In the active period of continuous pulsing, the pressure fluctuates strongly and the line-packing and un-packing behavior is evident as the mean pressure gradually increases and then decreases again. The mean pressure then falls strongly and so does the amplitude of the fluctuations. This was a clear indication that flow had become possible through the blockage region. Accordingly, the pulsing process was stopped and a period of nominally steady flow (around 500 l/min) started. When this high rate of pumping was stopped, the pressure reduced strongly, indicating that a circulating path had been created.

On another occasion, Paradigm unblocked a 12.7-mm (0.5-in.) diameter wax inhibitor umbilical which had been blocked for four years within two hours of pulsing. The line was rated to 340 bar (4,931 psi), and previous testing at this level had not removed the blockage. The 15.95-km (9.9-mi) line was packed to 80 bar (1,160 psi), and pulsing was initiated, with maximum pressures below 140 bar (2,030 psi). The fluid level with the Pipe-Pulse system was reducing continuously implying that the blockage was moving or there was a leakage path through it. Accordingly, pulsing was stopped and the pressure decayed continuously, indicating that a flow path did indeed exist. Solvent was then used to clear the line completely and the line pressure tested before handing back to production, allowing wax inhibition to be re-started to prevent further wax build up within the main flowline.

Subsea blockages are a common issue faced by the industry. In some instances these have been so complex and costly to treat that some operators are known to have multiple flowlines that have been left blocked for over a decade.

The problem of aging pipelines is mounting, particularly in the North Sea, and another key development is the proliferation of subsea tiebacks. Blockages in flowlines and umbilicals are a major concern in the oil and gas industry, and the more infrastructure is installed, the greater risk of further blockages. Deepwater and cold water fields also require longer and more expensive tiebacks.

Potential costs of blockages are enormous and alternative remediation techniques are required. While pressure surges have often been considered a hindrance rather than an ally in pipeline integrity, this technology proves that positive impacts can be achieved using more sizeable surge methods.