Co.L.Mar's Acoustic Leak Detector (ALD) technology has pinpointed defects this year on three subsea pipelines in a variety of settings. 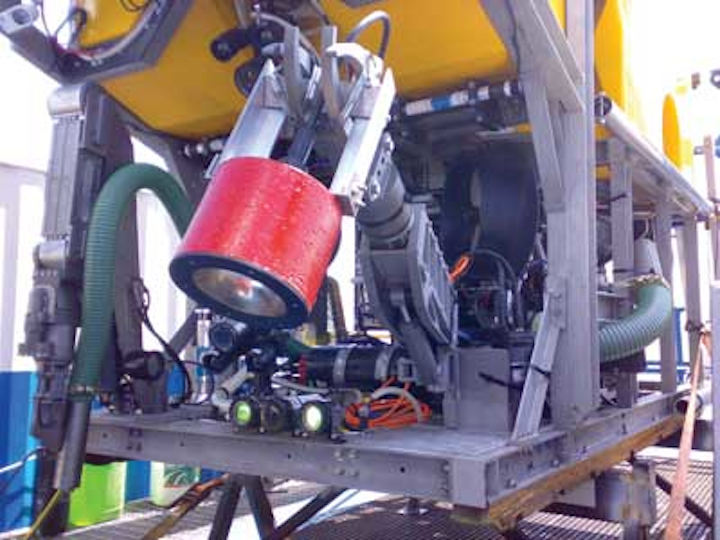 Co.L.Mar's Acoustic Leak Detector (ALD) technology has pinpointed defects this year on three subsea pipelines in a variety of settings.

Leaks in pipelines stem from transition of the transported fluid from the internal pressure to the lower external pressure. The resultant turbulence and sudden expansion of the fluid mass generate acoustic signals which the ALD processes to extract from the ambient noise to indicate leakage.

The system's main components are an underwater acoustic sensor that acquires data along the pipeline; a transmission line that relays data to the surface vessel; and PC-based software that evaluates the acquired signal in real time, and its development along the pipeline track. This signal is converted by the ALD's receiver to an audible lower frequency. Depending on the application (inspection or monitoring), different sensors can be deployed by divers, towed fish, ROVs, or lowered vertically over the side of a surface vessel.

One recent project was on a newly installed pipeline offshore in the Middle East. Co.L.Mar was called out following the hydrotest reporting a leak of just 0.21 liter/min which divers had been unable to locate. At the time, according to Managing Director Luigi Barbagelata, the line was filled with water and colorant.

"We found the leak at our first attempt on a valve flange – this was the smallest leak we had ever dealt with and proves the effectiveness and sensitivity of our system," he said. "We used an equipment spread deployed by divers and an ROV."

Another job was in the Indian Ocean, where Co.L.Mar used an ROV configuration to detect a leak in an umbilical in 200 m (656 ft.) water depth. Leakage was reported during tests following installation of the umbilical, which at the time was filled with air.

"Even though conditions were not ideal – a combination of air and pressure of just a few bar - we were still able to find the leak easily," said Barbagelata.

The third job was Co.L.Mar's first-ever assignment in the Americans. The location was a lagoon in very shallow water (1 m or 3 ¼ ft. deep). To work in this awkward environment, an ALD sensor, similar to that used with towed fish for tracking purposes, was mounted on the side of a small aluminum vessel with a very limited draft.

"The leak [the pipeline was water-filled] turned out to be in an area where the pipeline was covered by over 10 ft. (3 m) of sand," Barbagelata said. "I believe the reason it was buried by so much sand was not due to backfilling, but the dynamics of the seafloor in that area."

In June, Co.L.Mar was also commissioned to perform monitoring of the status of a subsea pipeline during a pigging operation.

"The contractor was concerned about potential stress that would be imposed on the pipeline. We monitored the pipeline using a towed fish continuously over the 10-day campaign, night and day, to ensure that if there were a leak, we could deal with it. The pigging team was working from the platform, while our specialists were based on the survey vessel with equipment ready for a repair if a leak were found."

Over the past two years. Co.L.Mar has been working on a new monitoring system for leak detection on subsea structures such as christmas trees, manifolds, or valves. Currently a basic prototype version is undergoing tests in a 6 x 10-m (20 x 33-ft.) indoor tank in 8 m (26 ft.) water depth: the sensor is designed to give an indication of the presence of a leak and the direction of the leakage.

"It comprises an array of four elements, which have so far given good results in the pool. Our next step is to repeat and optimize the test in the pool, then perform further tests out at sea with real leak detection equipment."