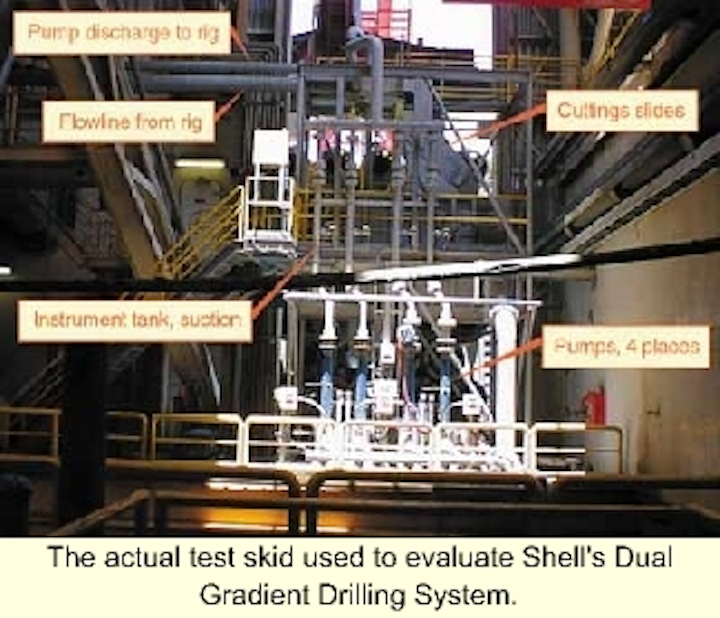 With the recent completion of phase two testing, Shell International E&P is prepared to move forward with a dual gradient drilling system for use in Gulf of Mexico ultra-deepwater wells.

The key advantage of a dual gradient system is the ability to lower the drill fluid pressure at casing shoes, allowing wells to be drilled with fewer casing strings, in shorter time periods, and at reduced cost. It is important, however, that pressure fluctuations that can lead to kicks or losses downhole are avoided.

Shell's dual gradient system relies on a series of electric submersible pumps (ESPs) to drive the drilling fluid back to surface from the seabed. Gonzalez emphasized that these pumps are industry-proven technology, and that the petroleum industry currently is using ESP units in wells worldwide.

At the same time, the centrifugal pumps typically are not designed to handle the metal shavings and rubble produced by drilling through float material after a cementing job, or the sticky clays often encountered in Gulf of Mexico drilling.

This latter phenomenon, known as "gumbo attack," involves a large amount of clays moving up the annulus to clog circulation and pumping equipment. If such a problem were to occur in a subsea pumping system, it could prove disastrous. To overcome these two hazards, Shell has designed a subsea solids removal system.

This removal system is composed of a pressurized nitrogen tank and solids separating slides. Returns from the well pass through a coarse slide inside the tank, where large solids are removed, and then to an instrument tank below. This design solves two major problems:

"This way, we won't over-pressure or under-pressure the formation as a result of pump speed mismatch," Gonzales said.

Pump speed is controlled by using proven level control methods. Such a control system is critical during drilling operations. For example, as pipe is tripped in or out of the hole, it introduces fluid surge and pump speed mismatch that could vary the downhole pressure. With the instrument tank, such pressure variations are avoided.

These are the key components, Gonzalez said, that Shell needed to field test before going forward with the design. To do so, the company designed and built a test skid that featured all the key components of the system. This skid was installed on the Transocean Marianas, though not subsea. The idea was to monitor the performance of several ESP designs, the solids removal system, and the instrument tank on the surface where adjustments could be made easily.

In addition to fluid conditioning and pump speed control issues, the question of well control also had to be answered. Gonzalez said the system includes a subsea mud/gas separator to which the flow can be diverted, from a subsea choke, in the event of a kick.

This separator eliminates free gas before sending returns to the surface, simplifying well control operations and reducing the volume of gas that is handled at surface near rig personnel. Beyond handling a kick is the need to detect it in time to divert the flow. The ability to detect kicks was tested in actual offshore operations.

Gonzalez said the test skid was tied into the return flow from the drilling unit's drilling system and operated without any operational difficulties. He said this is a good indication that the subsea system can be operationally practical.

The tests showed which tank level measurement systems worked best and established that the instrument tank was effective in controlling the process and downhole pressure fluctuations. Large pieces of cement, aluminum shavings from the float equipment, and even steel shavings from the inside of the casing string were culled out of the flow using the solids separation equipment.

Gonzalez said, because the ESPs are centrifugal pumps, there was some concern they could be susceptible to damage from large solids. The test alleviated the concern. "We didn't see any damage to the pumps from the cuttings," he said.

While the system eliminated a lot of gumbo and shavings in shallower portions of the well, Gonzalez said that in the deeper sections of the well, the system was eliminating less than 1% of the drilled cuttings prior to being returned to surface. There also was concern that the pumping system might alter the properties of the drilling mud, due to cuttings grinding. Tests proved this was not the case.

Shell is finalizing the process of assembling a team to design and construct the first working dual gradient drilling system. Gonzalez said this system would be put to work in the Gulf of Mexico in the latter half of 2002. The company is also discussing the system with Shell Technology Ventures.

Shell Technology Ventures takes technology that has been developed internally at Shell and commercializes it for sale to the industry. Gonzales said a commercialization strategy for the dual-gradient system is in the works, which might take the form of a spin-off company.