The end of production from the Thames gas field and its satellites in the UK southern basin could trigger the most extensive decommissioning program yet performed in the North Sea. Perenco and Tullow Oil are the two operators responsible for the campaign. Altogether 12 fields are involved, comprising six in the Thames Complex and six more in the greater Thames area. They are spread out over 13 blocks and five quadrants. Cessation of production was officially declared for all the fields on May 14, 2014, ending more than 25 years of gas supply to the UK mainland via the Thames offshore infrastructure. 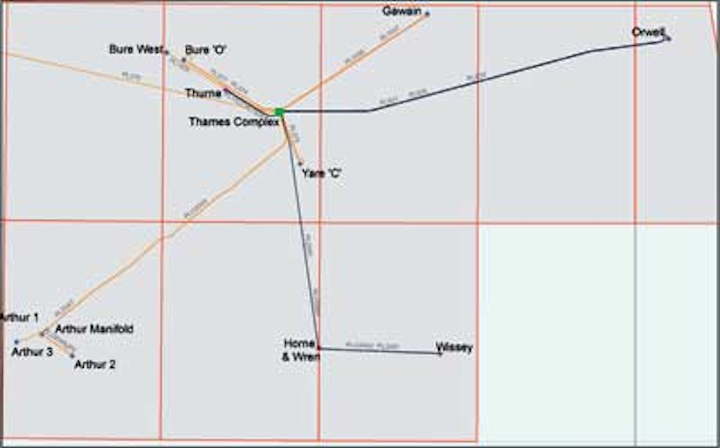 The end of production from the Thames gas field and its satellites in the UK southern basin could trigger the most extensive decommissioning program yet performed in theNorth Sea. Perenco and Tullow Oil are the two operators responsible for the campaign.

Altogether, 12 fields are involved, comprising six in the Thames Complex – Thames, Bure Oscar, Bure West, Thurne, Wensum, and Yare – and six more in the greater Thames area – Arthur, Gawain, Horne, Orwell, Wissey, and Wren. They are spread out over 13 blocks and five quadrants. Cessation of production was officially declared for all the fields on May 14, 2014, ending more than 25 years of gas supply to the UK mainland via the Thames offshore infrastructure.

Original operator Arco made the first discoveries, Yare and Thames, in 1969 and 1973, respectively. However, it was not until the 1980s that gas prices and technological advances made development economical. Initially Thames, Bure Oscar, and Yare came onstream in 1986, followed by Wensum in 1987.

At start-up, the Thames field center consisted of two fixed installations, the AW wellhead platform and the AP processing platform, with 420 MMcf/d capacity (12 MMcm/d). Gas was exported to Phillips' Bacton terminal through an 89.5-km (55.6-mi), 24-in. pipeline. Thames was expected to be fully depleted in 1998, but due partly to the added satellite gas flowing through its facilities, remained in production for 16 more years. One advantage of this longevity is that decommissioning will take place under new rules introduced by the UK government in 2013 that guarantee tax relief and other advantages.

In 1990, the Welland and Tristan fields were jointly developed and tied back to Thames. Welland, which is now operated by Perenco, ceased production in 2003 and has been separately decommissioned.

Another milestone was reached in 1993 with first gas from the Orwell field. Orwell was developed with three subsea wells tied back 35 km (21.7 mi) to Thames, which at the time was the longest step-out on the UK continental shelf. Compression facilities in the shape of two 5,000-bhp units had been placed on Thames in 1989, but in 1994 a 14,700-bhp unit was added to assist recovery from Orwell and Welland. At the same time control was moved onshore to Arco's Great Yarmouth base, making Thames the first remotely controlled processing center in the UK southern gas basin.

The next satellite tieback was Gawain, a 20-km (12.4-mi) step-out, also with three subsea wells, which came onstream in 1995. It was followed in 1998 by Bure West and Deben, both single-well developments within the Thames Complex. At the same time, a riser platform, AR, was installed with a bridge-link to AP to handle the increasing number of tiebacks. Deben ceased production in 2005, but a side track was drilled in the well to bring the Thurne reserves onstream in 2008, allowing re-use of the subsea tree, pipeline, and umbilical.

In 2005, Arthur, too, had been developed with three subsea wells and Horne and Wren with one well each drilled from a wellhead platform. In 2008, Wissey started production as a single-well subsea tieback to the Horne/Wren platform. The main mover behind these developments was Arco, which operated Gawain and Orwell as well as the Thames Complex. However, after BP acquired Arco in the late 1990s, ExxonMobil took on operatorship of the complex, eventually passing it on to Perenco in 2007. However, several of the fields – Thurne, Horne, Orwell, Wissey, and Wren – are now operated by Tullow.