New technology has been implemented gradually both in greenfield developments and modifications of existing fields, but for many of the technologies that adaptation is still low. There are several key subsea technology developments in the works that could reduce future barriers for widespread use. Subsea processing is the concept of gradually moving the entire topsides processing facilities to the seabed which would create better financial returns due to increased recovery. 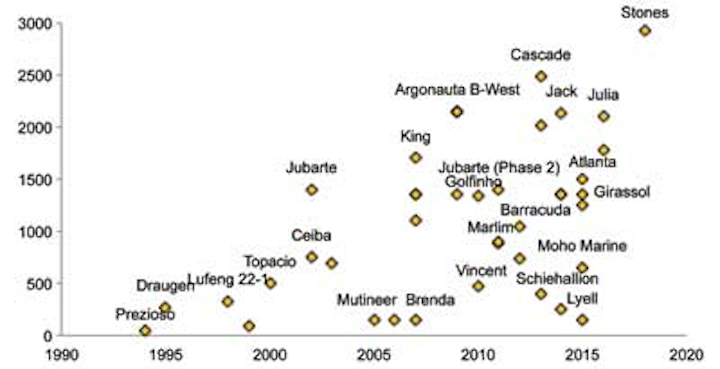 Offshore developments are continually moving into deeper waters and the nature of the game is that the biggest potential targets get drilled first with the most commercial fields being developed. As the offshore fields mature, pressure differentials narrow and step outs from existing infrastructure increase with the newest technology being developed to tackle the challenges.

New technology has been implemented gradually both in greenfield developments and modifications of existing fields, but for many of the technologies that adaptation is still low. There are several key subsea technology developments in the works that could reduce future barriers for widespread use.

Subsea processing is the concept of gradually moving the entire topsides processing facilities to the seabed which would create better financial returns due to increased recovery. In some cases, subsea processing is a prerequisite for making marginal field developments economically viable. By moving the processing of the well flow from the topsides to the seabed, projects previously deemed non-commercial may become economically viable, while increasing the recovery rates on existing fields. Currently, Petrobras, Statoil and the majors, along with equipment manufacturers, are driving the developments behind subsea processing. While subsea processing encompasses a large array of technologies and systems, there are mainly four technologies that have been implemented by the industry so far: boosting, separation, water injection, and compression.

Subsea boosting is the application of subsea pumps to "boost" the pressure in the well stream. The main advantages of subsea boosting are accelerated production; increased production and recovery; development of low energy reservoirs; heavy oil fields; long tiebacks; and where pressure differentials pose a problem.

The first subsea booster pump was a twin-screw multi-phase pump developed by GE Oil & Gas, which was installed in Eni's Prezioso field in Italy in 1994. Since this first installation in water depths of 164 ft (50 m), the technology has reached deeper depths. For instance, the Cascade oil field in the Gulf of Mexico (GoM) is currently the deepest subsea boosting system installed, at a water depth close to 8,202 ft (2,500 m); and Shell is currently contemplating booster pumps at its Stones development in 9,514 ft (2,900 m). Although GE was first, it is OneSubsea (through Framo Engineering) that has become the market leader, capturing most of the market with their helico-axial pumps. Today, the booster technology is by far the most mature of the subsea processing technologies.

Booster pumps are mainly used in oil fields with low gas to oil ratios, both for heavier and lighter crudes. The key regions have been, and will continue to be, Brazil, the US Gulf of Mexico, the North Sea, and West Africa due to the water depths, reservoir characteristics and tieback distances.

Subsea separation is the concept of separating gas/liquids or oil/water at the seabed. Such systems bring solutions to flow assurance challenges such as hydrates and slugging; enables viability of challenging reservoirs; prolongs economic lifetime of fields; debottlenecks flowlines, risers and topsides; and handles water and sand at the seabed, thereby reducing the potential costs associated with a topsides facility. Many of the installations have been in conjunction with booster pumps with subsea separation today, being a proven technology. While OneSubsea has taken the lion's share of the booster market, it is FMC Technologies that have become the market leader in the separation segment, being system provider for the majority of projects completed.

While experimentation on subsea separation systems occurred prior to the 2000s (Zakum 1965, Highlander 1985 and Argyll 1986), most people regard the Statoil Troll C pilot on water separation and injection in 2001 as the first modern subsea separation unit. The Troll system was installed in 1,115 ft (340 m) of water depth, 2 mi (3.5 km) from the platform. Today, it is Shell's Perdido field which is the deepest application of subsea separation at approximately 8,202 ft (2,500 m). Subsea separation systems have now been installed at 11 fields operated by Petrobras, Statoil, Shell, and Total. All the fields lay in Brazil, Norway, US GoM or Angola, and going forward, these areas, including the rest of the North Sea and West Africa, is seen as the primary markets for such systems.

Subsea water injection is used to increase recovery, and thus, important for value creation. In conventional injection systems, water is normally required with the water treatment being performed topside. High pressure water pipelines to the wells are installed, which means higher development costs. With subsea water injection, the whole system is placed on the seafloor, only requiring power from the shore/host.

The main potential advantages of subsea water injection include the ability to avoid expensive high-pressure flowlines, potentially expensive topsides modifications, and enabling more flexible development solutions in terms of injection well placement and timing. The first system was installed at Columbia E in the UK part of the North Sea in 2007. Since then, similar systems have been installed on the Tyrihans field in Norway (2011) and at Albacora L'Este in Brazil (2013). However, costs remain high and need to decrease to see more widespread use of these systems.