Earlier this year, Gothenburg-based GVA, part of the KBR Group, revealed it had moved beyond its traditional domain of semisubmersible floaters into monohull projects, both drillships and FPSOs. 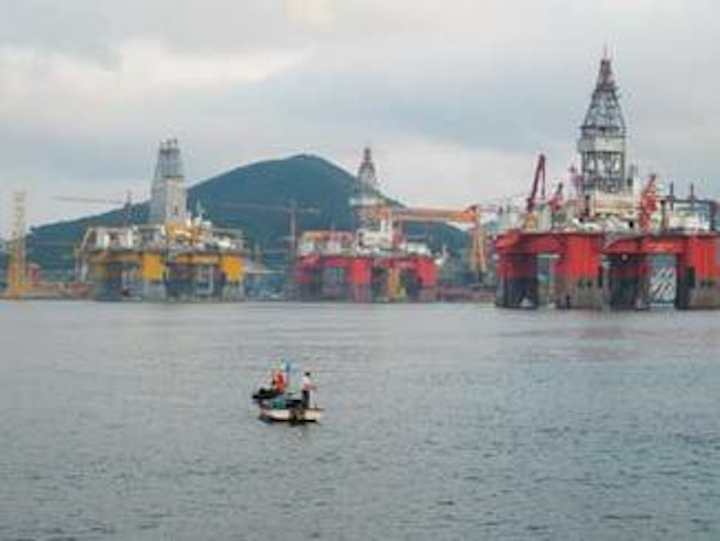 Earlier this year, Gothenburg-based GVA, part of the KBR Group, revealed it had moved beyond its traditional domain of semisubmersible floaters into monohull projects, both drillships and FPSOs. But its ambitions go well beyond this to embrace fixed installations for the oil and gas industry, and renewable energies such as wind and wave power.

According to business director Peter Larsson, “we are determined to change our profile and diversify our line of products, and to grow in line with KBR’s intentions.” Together with its parent company, GVA is performing a concept study on behalf of ABB for a rectifier platform to receive the power generated by an offshore wind farm and to convert it to high-voltage direct current (HVDC) for transmission to shore.

While ABB is taking care of the HVDC side, GVA will develop a concept for the remainder of the topsides and KBR will propose the jacket. This will be a large installation, and much of the work is aimed at optimization to reduce the weight.

ABB’s HVDC technology is featured in StatoilHydro’s Troll A pre-compression project and BP’s Valhall redevelopment in the North Sea. The equipment has been installed on the Troll A platform or will form part of the topsides on the new Valhall PH platform. But for future projects a dedicated HVDC platform will likely be required, Larsson believes.

“It’s important for us to get in and establish ourselves,” he says. “GVA is one of the few players for the power companies to work with which has extensive experience suitable for this type of installation.”

Further developments of the HVDC platform concept readily follow  while a fixed installation is limited to a certain water depth, a requirement in deeper waters would call for a floating facility. GVA also has been in discussions about bringing its marine engineering know-how to bear on wave power technology, another field in which there are currently few competitors.

In its traditional offshore market, the company has clinched a new contract for the GVA 7500, its sixth-generation deepwater, harsh-environment drilling rig design. The customer is Grupo R, which has exercised an option on the contract for its first unit, presently under construction at the South Korean Daewoo yard. The first rig, for which detailed engineering is now under way, is due for delivery in August 2010 and the new unit in September 2011.

Some of GVA’s new designs also are attracting interest. A workshop was staged last month with a leading drilling contractor to fine-tune details of the GVA 10,000, an outsize deepwater semisubmersible concept with a variable deckload of 10,000 metric tons (11,023 tons) for enhanced autonomy.

Intensive discussions have been held with a major shipyard concerning the company’s first drillship design. And GVA shortly expects to secure a contract for hull engineering of a newbuild FPSO. This work will be undertaken in cooperation with KBR.

GVA also is performing a conceptual study for a semisubmersible platform for a deepwater floating production project. Other concepts such as spars and FPSOs are under consideration, but in Larsson’s view, the semi scores due to the large topsides requirement  the size of the unit will be between those of it has designed previously for the Thunder Horse and Atlantis projects. Concept selection will be made ahead of the FEED phase, due to start in January.

Diversification across several fronts means the company needs to expand its staff. “We’ll be launching a recruiting campaign this fall, looking to take on another 50-70 engineers,” says Larsson. “Our ambition is to be twice as big by the middle of next year.”

Larsson is optimistic that the campaign will be successful, despite industry concerns about a shortage of qualified personnel. Not only is Gothenburg the center of Sweden’s offshore industry, and the site of leading teaching and research institutions such as Chalmers University, but also several industries in Sweden, including the automotive industry, are down-manning.

“In the mid 1990s a lot of people moved from the offshore to the automotive sector,” says Larsson. “They have the experience and the know-how which suits the offshore industry, and we hope to attract them back.”