As Remora’s first HiLoad unit prepares for sea trials, the contractor already is planning a second under an EPC contract awarded by Stena Drilling last year. 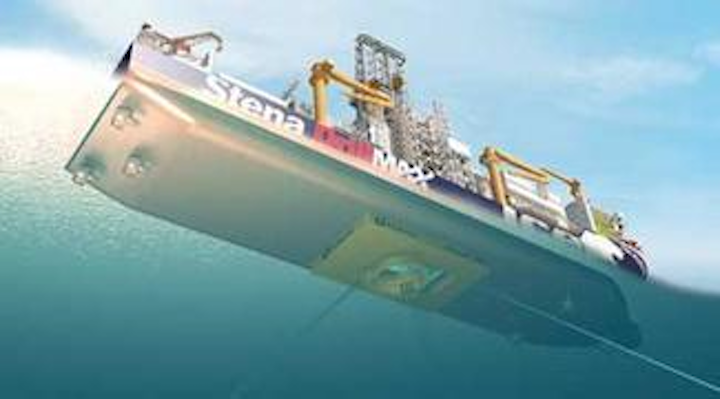 As Remora’s first HiLoad unit prepares for sea trials, the contractor already is planning a second under an EPC contract awarded by Stena Drilling last year.

The first unit is a HiLoad DP designed for offshore oil loading, which it achieves by attaching itself to the loading tanker and keeping it on station by means of a DP-2 dynamic positioning system.

Now Stena sees potential in using the moored version of the technology for drilling  HiLoad MVD  to improve the ability of its new ice-class DrillMAX drillship,Stena DrillMAX Ice, to operate in shallow waters and harsh arctic environment.

In arctic conditions the vessel is subject to large loadings which could cause an excessive offset from the well. But with a HiLoad MVD alongside, the vessel’s station-keeping should improve to the point where it can operate in water depths to around 150 m (492 ft).

“With the first HiLoad unit almost ready for full-scale testing, we take the Stena contract as real evidence that the industry is starting to acknowledge the benefits of our technology,” says Claes Olsen, vice president in Remora.

Compared with the HiLoad DP, which has two towers at the stern and its own propulsion and DP system, the HiLoad MVD is a straightforward steel structure, consisting mainly of a pontoon for the Stena drillship application.

The upper surface of the pontoon is fitted with Remora’s patented friction attachment system which, in effect, locks it to the drillship hull. The structure incorporates a turret which moors the pontoon to the seabed and around which it can rotate. There is also a ballasting system to enable the unit to be moved up and down in the water.

All operations now are controlled from the drillship, including de-ballasting of the HiLoad unit until it contacts the hull, followed by attachment. Once the ship and HiLoad unit are joined, the drillship can use its own DP-3 system to adjust its heading as the direction of current or weather changes. The turret, which is open in the center, is aligned with the drillship’s moonpool, allowing the drillstring to pass through it.

Stena is considering deploying more than one HiLoad MVD unit, so that while one is in use, another can be pre-moored at the drillship’s next location ahead of its arrival, minimizing the time necessary to prepare the ship for drilling operations at the new location.

The EPC contract is being executed in three main phases. The first, comprising conceptual design and feasibility studies, already is complete. This includes scale model testing at the Marintek facility in Trondheim which gave very promising results, Olsen says. In addition, a team drawn from Stena, DNV, and Remora performed a HAZID  hazard identification  exercise which revealed no major concerns. DNV is currently in the process of approving the design in principle.

The second phase, scheduled to run from April until late this year, consists of basic engineering which will advance the design to the point of engineering drawings and yard tendering. These will form the basis for quotations from fabrication yards and main equipment vendors. The third phase will be fabrication, taking around 10 months. The most advanced element is the turret, Olsen says, which is assembled with the pontoon in the final stages.

If the contract is completed as foreseen, the HiLoad MVD units will be ready for installation prior to the delivery of the Stena drillship from Samsung Heavy Industries in late 2011.

The Stena contract underlines the potential of the generic HiLoad concept. Remora’s own vision for the moored turret version was a loading station-keeping application aimed at permanently moored vessels such as FPSOs and floating storage units.

Meanwhile, construction of the HiLoad DP unit at Aibel’s Haugesund yard in western Norway is virtually complete. In February the unit, which weighs 4,200 tons (3,810 metric tons), stands 59 m (194 ft) high and has a pontoon base measuring 27 sq m (88.6 sq ft), was loaded out onto a barge. In March the final stages of mechanical completion and commissioning were under way, and the unit was launched into the waters in the proximity of the yard. It will undergo an inshore test program before proceeding to sea trials.