The global fleet of stimulation vessels available to the industry is the largest in its history. And, the technologies onboard are certainly the most advanced to date. Deepwater stimulation vessels may be the technology superstars, but offshore intervention, while perhaps not as glamorous as big-league pressure pumping operations, also has an essential role to play and a similar set of difficult challenges. 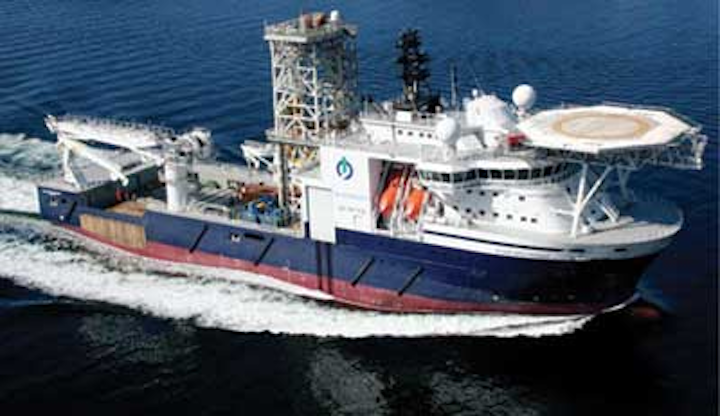 Deepwater vessels are the most visible part of stimulation operations, but other, behind-the-scene components such as chemicals and proppants are also essential to success.

Problems such as inorganic and organic deposition, corrosion, and reservoir souring can occur after stimulation. During a well's stimulation phase, the Baker Hughes StimPlus flow assurance service pumps slow-release, solid flow-assurance chemicals into the reservoir as part of fracture, gravel pack, or other stimulation treatments, to protect against production flow problems. For deepwater and ultra-deepwater wells, a solid substrate ensures reliable application in high-pressure environments.

The service includes a variety of field-proven, chemically compatible additives to protect against bacteria-induced corrosion and reservoir souring. They are also intended to ensure constant production flow and prevent deposition in the formation and wellbore after the treatment.

For deepwater wells, the company's high-strength scale inhibitor particles can serve as a conventional, medium-strength proppant while providing long-term inhibition. These particles can be used in closure pressures greater than 8,000 psi.

Based on bioengineering, a novel technology from EOR Solutions uses an enzyme with the property to attach to hydrocarbons and subsequently release them as droplets, which can then be recovered. This mechanism causes the removal of plugs made from deposits of heavy hydrocarbons near the wellbore, leading to increased fluid flow.

In water-wetted systems, the enzyme changes the surface to become enzyme-water wetted. The enzyme also reduces the surface tension between oil and the aqueous phase. These effects cause the release of oil trapped in pores.

The ultimate use of the technology is in flooding systems where the whole reservoir is flooded with a diluted enzyme solution. This causes a reduction in residual oil saturation following actual enhanced oil recovery.

The enzyme is said to be nontoxic, nonpathogenic, and biodegradable. It is resistant to temperatures and chemicals typically present in reservoirs.

Because the well stimulation process using the enzyme technology is simple—it requires only a setup of mixing tanks and pressure pumps—it is applicable to both onshore and offshore wells. The enzyme does not interact with water salinity, and dilution with seawater and preparation for offshore well stimulation can be done on the rig or platform.

The enzyme technology is mostly used for permanent changes to formation wetting conditions near the wellbore. Accordingly, wells that have been in operation for a long time or have conditions in the formation or oil properties that are causing deposition of asphaltenes, resins, or other heavy hydrocarbons near the wellbore are good candidates for stimulation by this technology. The use of the enzyme technology to release these deposits and create an enzyme-water permanent surface of the rock near the wellbore increases inflow of fluids to the well and increases oil production.

The releasing mechanism is done in a catalytic manner; the enzyme does not react with or form stable compounds with hydrocarbons. The properties of the enzyme and components in the enzyme treatment solution changes oil-wetted solid surfaces to enzyme-water wetted.

Enzymes are organic catalysts and the enzymatic function of the product is because the enzymes seek and release the oil but are not consumed in the releasing mechanism.

Because the enzymes do not interact with acids, they can be used in combination with, for example, acid treatment of carbonate-based rocks, giving synergetic effects of enhancing flow conditions and releasing oil from the rock surfaces.

The enzyme fluid has not shown to interact with other oilfield chemicals such as scale inhibitors and biocides, so it can be used in combination with such chemicals. Stabilizers have also been added to the enzyme solution to make them resistant to high temperatures present in most oil reservoirs.

A request from a major operator in the Gulf of Mexico led to the development of an ultra-conductive, ultra-high strength proppant technology to maximize and sustain hydrocarbon flow rates at 20,000 psi closure stresses for the life of the well. The significantly higher rates of hydrocarbon flow created by an ultra-conductive proppant enable operators to achieve a greater return on investment.

At 20,000 psi, Carbo Ceramics' Kryptosphere proppant has approximately twice the baseline conductivity of bauxite-based high-strength proppants (as measured by ISO 13503-5). As the reservoir depletes and closure stresses increase, the proppant retains its integrity to provide the long-term conductivity of each fracture, which increases ultimate recovery.

The proppant's sustained conductivity has been demonstrated during cyclic loading tests. After cycling closure stress between 20,000 psi and 12,000 psi five times, the difference in conductivity increased to almost four times that of comparable bauxite proppants. API Acid Solubility tests demonstrate that the proppant's acid resistant is more than 10 times greater than conventional high-strength bauxite proppants.

A beta factor one-fifth of conventional high-strength bauxite after cycling at 20,000 psi minimizes the impact of non-Darcy flow, reducing the multi-phase pressure drop through the fracture and delivering a more uniform flow profile.