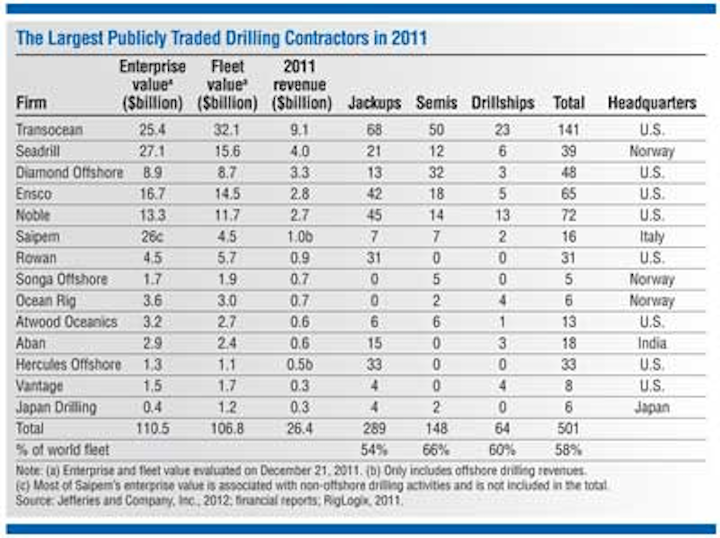 Drilling contractors compete in regional markets with rigs of different classes, qualities, and specifications. The first part of this three-part series describes ownership structure and how public firms are valued by the market. The primary factors that impact valuation are revenues, net earnings, fleet values, and debt load. 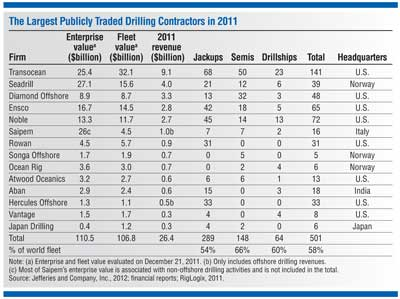 Drilling contractors are corporate entities that may be owned by investors or a government. Investor-owned drilling contractors may be publicly traded or privately held. Publicly traded corporations have a large number of shareholders and their reporting requirements are regulated by the stock exchanges where they are listed, whereas private firms are owned by a small number of shareholders and are not required to report financial or operational data. State-owned drilling contractors may be entirely owned by a state, or a fraction of the shares may be traded on a financial exchange. The ownership structure of the firm impacts business strategies, governance, access to debt, and transparency. 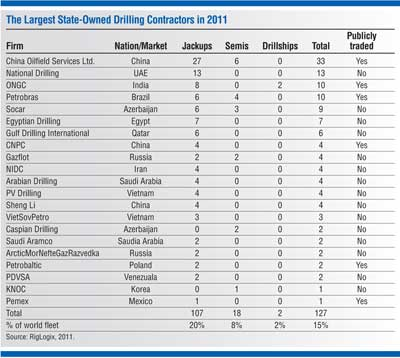 The 14 largest publicly traded drilling contractors realized $26.4 billion in revenues in 2011 from an inventory of 501 drilling rigs (289 jackups, 148 semis, and 64 drillships) and generated more than half of the industry's total revenue. Total fleet value is estimated at $107 billion, and collectively, the companies had an enterprise value of $111 billion.

Transocean was the largest contractor in terms of fleet size and revenue, and owned 141 rigs, or 16% of the total fleet, including 22% of the total floater fleet. In September 2012, Transocean agreed to sell 38 shallow-water drilling rigs to Shelf Drilling International Holdings Ltd. for $1.05 billion as part of its strategy to unload older rigs and focus on the high-end market. Seadrill was the largest firm by enterprise value, with only half the revenue and one-third the fleet size of Transocean. After the 2010 Macondo oil spill, Transocean's share price declined because of uncertainty associated with its future liability. Seadrill, Diamond, Ensco and Noble together own 209 rigs, including 88 floaters, and account for 24% of the total fleet and 27% of the floater fleet.

Transocean, Seadrill, Diamond, Ensco, and Noble are significantly larger than their nearest competitors, and each had revenues of over $2 billion in 2011 with enterprise values of $9 billion or more. These five firms are categorized as "large-cap" and the nine smaller firms as "mid-market" players. Large-cap firms operate large diverse fleets in a number of geographic regions, while mid-market firms operate smaller fleets and are more likely to specialize by rig class and geographic region.

All large cap firms except Seadrill are headquartered in the United States, as are the mid-market firms Hercules, Rowan, Atwood, and Vantage. Seadrill, Songa, and Ocean Rig are headquartered in Norway. Most firms are incorporated in offshore financial centers for tax purposes. Common centers of incorporation include Switzerland, Cyprus, and the Cayman Islands.

China Oilfield Services Ltd. (COSL) is the largest state-owned drilling contractor and owns as many rigs as National Drilling (UAE), ONGC (India), and Petrobras (Brazil) combined. In total, state-owned firms own 127 drilling rigs, or about 15% of the world fleet, and control about 20% of the jackup market. Most state-owned firms are jackup-oriented, but COSL, Petrobras and Socar own semisubmersibles, and ONGC owns two drillships.

State-owned drilling contractors work almost exclusively in their home countries and are typically important players in their home markets. They may be a subsidiary of a national oil company (e.g. COSL is owned by CNOOC) or the NOC may directly own and operate the drilling fleet. The largest state-owned drilling contractors are publicly traded firms in which the government is the majority shareholder (Petrobras, CNOOC, ONGC); most other state-owned contractors are not publicly traded and are small players similar to small private firms.

Private firms own about a third of the world's deepwater rig fleet, and play an important role in the floater markets in the North Sea and Brazil. Maersk Drilling, Stena Drilling, Dolphin, Schahin, and Odfjeld are the largest private contractors and control about 20% of the private fleet. Maersk Drilling is a subsidiary of A.P Moller-Maersk and Dolphin is a subsidiary of Fred Olsen Energy.

The only privately held firm frequently operating in the US GoM is Spartan Offshore, which is owned by a private equity firm and operates four low-spec jackups. About 50 firms own fewer than three rigs, and are either privately held or traded on the over the counter market.

The number of contracted days across all regional markets is used to measure market share. Over the past decade, jackups have been contracted between 250,000-350,000 days and floaters 150,000-275,000 days per year. Publicly traded firms dominate the market because of their larger fleet sizes, but state-owned contractors are important in the jackup market, constituting about 20% of days on contract, and in the floater market, private firms share of contracted days has historically ranged from 10 to 20%.

Publicly traded drilling contractors are continuously valued by the market. The primary factors that impact valuation are current and projected revenues, net earnings, fleet values, and debt levels. Factors that are more difficult to observe and quantify that also impact market valuation include insurance liabilities and customer relationships.

Transocean and Diamond are the only two large-cap contractors that fall below the industry average in both revenue and earnings. Transocean's $5-billion market discount suggests the market valuation of its liabilities associated with Macondo. In January 2013, some of this uncertainty was resolved when Transocean agreed to pay $1.4 billion to settle all federal civil and criminal claims related to the oil spill, but pending claims remain. Diamond falls below the industry line due in part to its older fleet, despite relatively strong revenues. Seadrill, Ensco, and Noble have higher enterprise values than the industry average, with the premium for Seadrill being particularly large due to its focus on high-specification units which have received high utilization and day rates in recent years. Ensco and Noble also have higher-spec and globally diversified fleets, which contributes to their higher valuation.

Fleet value is closely correlated with fleet size and is a significant predictor of enterprise value. Fleet value is defined as the net asset value of the firm's rig portfolio, and depends upon rig specifications, market conditions and the backlog of contracts held by the firm. Fleet sizes vary over time with newbuild programs and retirements, and can vary dramatically with merger and acquisition activity. A large asset base implies a platform for sustainable revenues and correlates to the diversity of the product line.

For most firms, enterprise value as a percentage of fleet value varied between 80% to 120%, between 2010 and 2012. Rowan's valuation fell on the low end of the spectrum, between 60% and 90% of fleet value, due in part to its jackup specialization and large proportion of its operations in the low-day rate Persian Gulf and US GoM. By contrast, Seadrill's enterprise value was over 200% of net asset value reflecting its high-spec fleet and focus on Southeast Asia and the North Sea, where utilization rates are high and day rates command a price premium.

The cost to construct offshore drilling rigs is substantial, and the capital requirements to maintain a fleet requires a strong and stable cash flow. As a result, contract drillers often show negative free cash flow during periods of construction or major fleet enhancement. Seadrill and Songa were active in the newbuild and secondhand markets between 2008 and 2011, and illustrate the range of financing alternatives.

By contrast, Seadrill's debt as a proportion of market capitalization remained relatively stable from 2008-2011, ranging between 60% to 70%, even as the firm's debt load grew from $6 billion in 2008 to $10 billion in 2011. Instead of using cash to pay off debt, Seadrill has spent cash on acquisitions and newbuilds. Strong current and projected future earnings have allowed the firm to maintain a high market capitalization and a modest debt ratio load. Next part, we review operator specialization and newbuild strategies.

Editor's note: This article is the first in a three-part series by Mark Kaiser and Brian Snyder on the offshore contract drilling market.