Seismic vessel survey is expanded to include additional vessel types

The 2014 Worldwide Seismic Vessel Survey lists 179 vessels. This is an increase if directly compared to the 2013 tally, but that is deceiving. 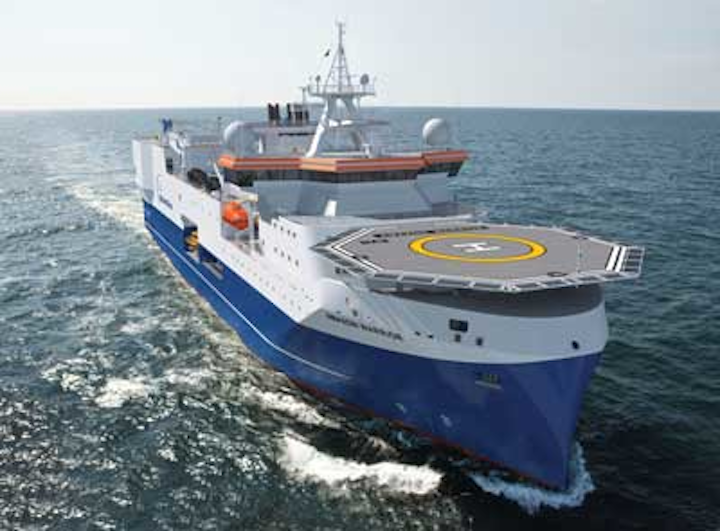 The2014 Worldwide Seismic Vessel Survey lists 179 vessels. This is an increase if directly compared to the 2013 tally, but that is deceiving. There are two significant changes this year. The listing adds Geokinetics and its 43 transition zone/shallow water/OBC vessels for the first time, and the two electromagnetic survey vessels of EMGS. That tally should grow over the near term as purpose-built, high-capacity vessels come out of shipyards, and more non-traditional geophysical survey vessels are counted.

The new purpose-built vessels are in response to the demand for increasingly complexseismic data acquisition techniques.

On the other side of the ledger, Reservoir Exploration Technology and its sevenvessels are deleted, with the company in the hands of a Norwegian bankruptcy court. WesternGeco elected again this year not to participate in the survey, and that leaves a further 20 or so vessels unlisted.

Innovation is not limited to support vessels.WesternGeco has christened the first of its Amazon-class seismic vessels, designed "from the bottom up" to handle modern seismic spreads.

Modern seismic streamer spreads typically extend up to 12 km (5 mi) in length and up to 1,400 m (4,600 ft) in width, requiring considerable sideways deflection leading to additional drag. Efficient and safe storage and deployment of all this equipment requires large back decks with specialized designs. There have been a range of hull designs considered suitable for seismic operational needs, and these hulls have converted decks to accommodate and deploy the equipment. A feature common to all of these hull designs is that they were originally optimized for purposes other than seismic operations.

In November 2013, WesternGeco christened the world's first vessel designed from the bottom up to be a sustainable and efficient marine seismic platform. The company expects these Amazon-class vessels will support its activities for at least the next 10 years.

Maritime engineers were tasked to design a hull, propulsion system, and all the other vessel components to meet seismic data acquisition requirements with no compromises in HSE or operational efficiency. The design process involved input from equipment users, and WesternGeco's HSE knowledge management database was used to evaluate and mitigate potential safety risks.

The first Amazon-class vessel,Amazon Warrior,is at the Flensburger Shipyard in Germany and is scheduled to start operations in 2Q 2014. The second Amazon-class vessel, yet to be christened, is expected to enter service by 4Q 2014. At 126 m (413 ft) long, 28-32 m (92-105 ft) wide, they will provide large, powerful and stable platforms during inclement weather. The knife-shaped bow reduces slamming to help maintain streamer control and to reduce noise in the seismic data. There is capacity for more than 200 km (124 mi) of streamers and 18 streamer tow points. A "quad-deployment" design enables four steamers to be handled simultaneously. The available work space enables safe and efficient at-sea reconfiguration of streamers.