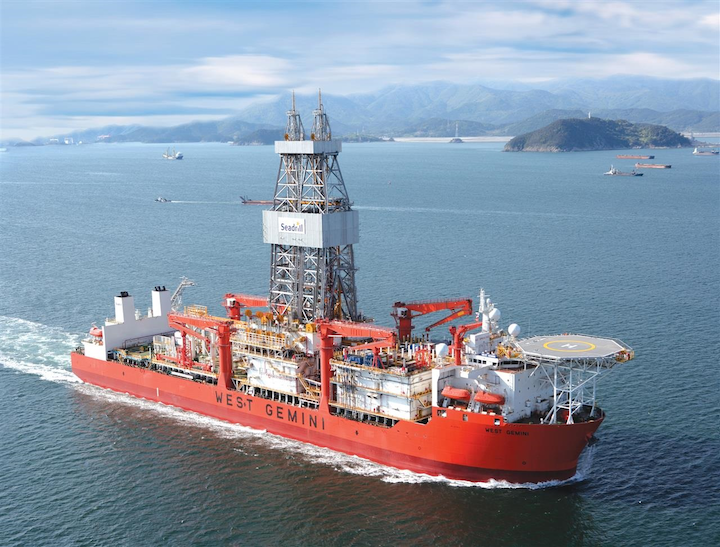 The drillship West Gemini’s program off Angola was extended into August and the rig secured a nine-well contract with three options, each for two wells, off West Africa.
(Courtesy Seadrill)

Eight of the company’s floaters started new contracts during 2Q. However, the company is holding reactivating other floaters until day rates improve further.

The semisubmersible Sevan Louisiana underwent repairs before returning to work in the current quarter.

Nine of Seadrill’s jackups operated in 2Q with one starting a new contract at a higher day rate. The company reactivated two of its idle jackups.

During 2Q, the backlog of contracts grew by around $160 million. The drillship West Gemini’s program off Angola was extended into August and the rig secured a nine- well contract with three options, each for two wells, off West Africa.

Total contract value for the firm portion, due to start in 4Q, should reach around $84 million, with work continuing through 1Q 2021.

The jackup West Telesto gained a six-well contract with two options, each for one well, offshore Malaysia. The firm portion started in June and continues through December.

The ultra-deepwater drillship West Carina has a one-well contract for Petronas off Brunei while Seadrill negotiated a one-month extension of the jackup West Callisto’s program for Saudi Aramco to September.

More recently, the jackup AOD II gained a three-month extension of a program for Saudi Aramco to October.

Tendering activity continues to improve in the drilling floater market, Seadrill said, with the spot market for short-term work competitive and rates for longer-term work improving.

There is demand for harsh environment units and high-end ultra-deepwater drillships with marketed use approaching 90%. It now appears that 2018 marked the low point for benign environment floater fixtures, the company added.

It also sees improvements in the premium jackup market with marketed use above 80% and rates trending toward $100,000/d, due largely to activity in the Middle East.