Despite the steady decline in the oil price and its impact on new project activity, the downturn should be relatively short-lived. 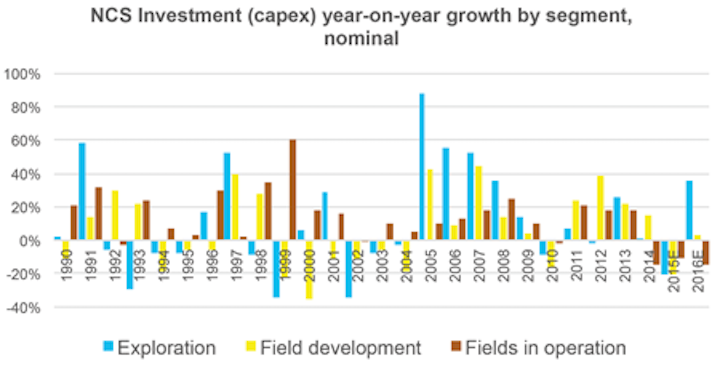 Despite the steady decline in the oil price and its impact on new project activity, the downturn should be relatively short-lived. Rystad Energy's research points to upward pressure on oil prices towards 2017, with global oil demand growing by 1.1 MMb/d in the run-up to 2020. This should spur a new cycle of investment even in higher-cost offshore regions such as northwest Europe where many operators are under pressure to rein in exploration and new field development.

The Norwegian organization Statistics Norway recently published new estimates for investments on the Norwegian continental shelf (NCS), based on information collected from all the operators on behalf of the Norwegian Petroleum Directorate.

When analyzing the details of the investment history and the forecast expenditure, several clear trends emerge:

Exploration. It is the rule rather than the exception to see either double-digit growth or decline in exploration activity year-on-year. Following the Norwegian government's introduction of the Awards in Predefined Areas (APA) licensing procedure in 2003 and the "cash back" scheme in 2005, whereby the State reimburses the 78% tax base of costs related to exploration drilling, exploration activity grew steadily during the mid 2000s. This growth was also fueled by a rising oil price. But despite the recent oil price collapse, Statistics Norway now forecasts a 35% increase in Norwegian exploration activity compared to the most recent 2015 estimates. Rystad Energy believes this figure is too high and will most likely be lowered in future estimates, but the conclusion remains unchanged: exploration has and will be volatile - the observed trends are normal and not unique.

Field development.Following the oil price increase after the 2008 financial crisis, multiple PDOs (plan for development and operation) were submitted for standalone Norwegian field developments such as Knarr, Valemon, Ekofisk 2/4 Z and Eldfisk 2/7 S (2010), Edvard Grieg and Martin Linge (2011), and Aasta Hansteen, Ivar Aasen, and Gina Krog (2013). With such a large number of new projects going forward at the same time, the field development market soared from NOK 30 billion ($3.62 billion) in 2010 to NOK 73 billion ($8.8 billion) in 2014 - a staggering 24% increase year-on-year. But growth periods such as these are usually followed by a cool down, so the current decline in the Norwegian field development market is not unique.

Fields in operation. Brownfield investments offshore Norway (including infill drilling) did not tail off markedly during the previous downturns, experiencing a 3% decline in 1992, a 1% drop in 2002, and 2% in 2010. Last year, however, there was a 14% fall in Norwegian brownfield spending, the largest ever recorded in this segment. Most recent estimates suggest a further drop of 10% in 2015, and another 14% for 2016. If that happens, the 2016 brownfield market will be some 60% below the peak year of 2013. Three years of double-digit (%) decline in the brownfield market is not normal - the brownfield market has not been cyclical - it is unique for the current declining market.

As for MMO (maintenance, modifications and operations), the number of frame agreements entered into was down by 20% last year, the largest cut ever seen, with bigger modification projects being postponed or canceled. Only a few large contracts have been awarded over the last six months, notably the modification program on the Kristin complex to receive production for Wintershall's Maria tieback - a NOK 600-million ($71.6-million) contract awarded to Reinertsen this March was one of the biggest.

Using Rystad Energy's database of historic and forecast spend field-by-field, a complete picture can be drawn encompassing investments (including those for unsanctioned field developments) and operational expenditures. Total Norwegian upstream expenditures ended up close to $39 billion in 2014, up 7% from 2013. The decline estimated for 2015 is around 8% and suggests a lower overall investment than figures released by the NPD imply, which are actually driven by higher investments in fields under development, among others. Additional cost overruns and carry-overs are expected on major Norwegian offshore facilities currently under construction in Asia or in the hookup phase, such as Goliat in the Barents Sea. Other major projects such as Aasta Hansteen and Martin Linge are believed to be experiencing difficulties meeting planned budgets and delivery schedules. Similarly, investments for 2016 are expected to be slightly down from 2015 levels, with several projects in the completion phase, while the modification market may possibly end up higher than reported by Statistics Norway.

Looking toward 2020 there are many uncertainties surrounding investment estimates, specifically regarding the sanctioning of new projects and exploration levels. For example, Statoil has pushed back final investment decisions for Johan Castberg in the Barents Sea and Snorre 2040 in the North Sea - both expected to be multi-billion dollar projects with new floating production platforms - to second half 2017, with start-up around 2022-2023. With this current time-line, these projects are important to meet forecast 2020 development expenditure for the Norwegian sector of around $40 billion. Other forthcoming key projects are Johan Sverdrup phases 1 and 2 and potential developments of the Skarfjell, Pil and Alta/Gohta. However, the exploration market looks set to level off at around $5 billion/yr from 2016 onward after peaking at $6 billion in 2013.

Norway's current field development boom includes a healthy mixture of old discoveries having matured into economic projects (e.g. Martin Linge and Valemon) and discoveries made over the last decade (e.g. Edvard Grieg and Goliat). The latter were a direct result of the previously mentioned government initiatives APA and "cash back." A comparison of volumes discovered in recent years offshore Norway and the UK highlights one of the key issues for the UK continental shelf (UKCS). Here exploration results have been persistently poor and in decline since activity peaked in 2007/08. In 2008, 121 wildcat and appraisal wells were drilled across the UKCS with oil and gas discovered totaling 444 MMboe. Since that period exploration activity has consistently decreased, with only 38 exploration wells drilled during 2014 and only 98 MMboe discovered.

Many of the newer programs on the UKCS have been redevelopments of existing fields. BP is currently redeveloping its Schiehallion and Loyal fields West of Shetland for £3 billion ($4.64 billion) with the replacement FPSO expected onstream in 2016. Nearby, the company is also progressing the £4.5-billion ($6.9-billion) Clair Ridge project, the second-phase development of the giant Clair field; while Talisman/Repsol are working on the £1.6-billion ($2.45-bilion) Montrose area redevelopment in the UK central sector.

Going forward toward 2020, however, the portfolio of stand-alone candidates that could spur UK greenfield investments is limited to a handful, led by Maersk's HP/HT Culzean project in the UK central North Sea, approved early last month by the UK government. The development plan calls for a bridge-linked complex comprising a wellhead platform, a central processing facility and utilities/living quarters, with a total investment of over $4.7 billion. Start-up is scheduled for 2020-21. Statoil is expected to decide shortly on a concept for the Bressay heavy oil field East of Shetland, and Chevron has not given up on its challenging deepwater Rosebank development west of Shetland.

The UK's brownfield market differs from the Norwegian model with its historically large EPC contracts. The NCS has been developed with fewer but larger platforms, many of which now have spare capacity to tieback multiple new subsea fields. This provides a greater incentive in current conditions to undertake large-scale modifications. Due to its more limited development agenda, a smaller brownfield market and a lack of appetite for exploration, the current outlook for the UKCS is not promising in the short term, with total E&P expenditure likely to fall by 25% this year, followed by a further drop of 12% in 2016. Given the current market, future UKCS spending looks highly unlikely to approach the historic highs of 2013 and 2014. However, the British government has recently unveiled various tax reduction measures to support investments in maturing offshore prospects and exploration. Sir Ian Wood's Review has also presented recommendations on how to maximize recovery over the long term from the UK North Sea. These, combined with the current cost-cutting schemes observed in the industry, could change the outcome going forward.

The recent downturn has affected investment levels on both the NCS and the UKCS. On the NCS we expect to see an investment cut across exploration, field development, and operations in 2015. This is a unique observation for the current downturn. Total upstream expenditure is estimated to decline by 8% from the peak in 2014 to 2015 and stay flat in 2016. In the longer term however, the activity level is expected to pick up on the NCS, largely driven by the Johan Sverdrup development. 2014 investment levels could potentially be reached by 2020. On the more mature UKCS, poor exploration results and low exploration activity over recent years are evident through a small backlog of potential developments. A drop of 25% in total E&P expenditure is expected in 2015 followed by a further drop of 12% in 2016. The government is, however, introducing new tax measures that could have a positive effect on investment. •