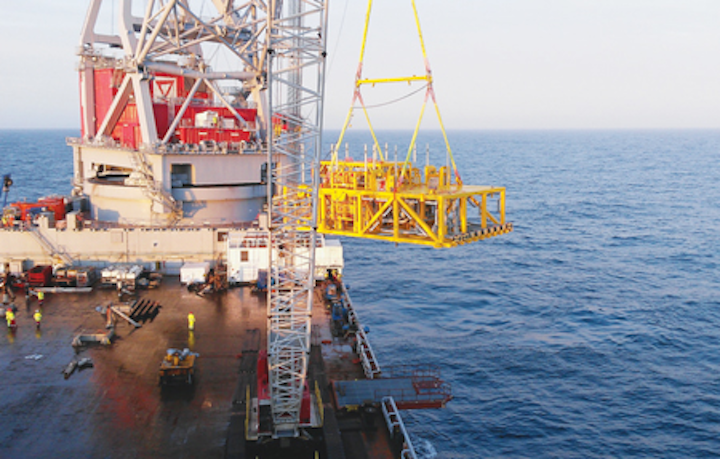 Operations have started at the world’s first two subsea gas compression stations, serving the Åsgard and Gullfaks field complexes offshore Norway. The aims in both cases are to maintain production to counter declining reservoir pressure. According to operator Statoil, placing the equipment subsea is more efficient than the alternative of a topsides compression module adding extra weight to an already space-constrained platform. In Gullfaks’ case, analysis suggested the subsea solution would also be more productive in terms of improved recovery than the platform option.

The first compression plant entered service in mid-September in 300 m (984 ft) of water at Åsgard in the Norwegian Sea. Two identical gas compressors with associated pumps, scrubbers, and coolers are installed on the seafloor, close to the subsea wellheads for the Midgard and Mikkel gas reservoirs. Prior to gas compression, the produced gas and liquids are separated; following pressure boosting, they are recombined and sent through a pipeline 40 km (25 mi) to the Åsgard B platform. Statoil expects the equipment to boost recovery at Midgard from the currently estimated 67% to 87%, and at Mikkel from 59% to 84%. Aker Solutions, which supplied both systems, also manufactured a spare compression train which is stored at the Vestbase onshore supply center in Kristiansun.

For the Gullfaks field in the North Sea, OneSubsea engineered and manufactured a subsea wet gas compressor station. This comprises a 420-metric ton (463-ton) protective structure housing two 5-MW compressors weighing 650 metric tons (716 tons) in total, located downstream of the L and M subsea templates serving Gullfaks South, with associated equipment on the Gullfaks C platform for power supply and control of the subsea system. In this case, the plant is designed to recover an additional 22 MMboe. Statoil points out that a wet gas compressor does not require gas and liquid separation ahead of compression, allowing use of smaller modules and a simpler structure overall on the seafloor. Instead, the wellstream is homogenized by passing it through a mixer before it is compressed.

The company is looking to increase recovery from the Gullfaks South Brent reservoir from 62% to 74% through this solution, allied to the introduction of low-pressure production. The station has been fitted with tie-in points that could accommodate other subsea wells in future via existing pipelines. Assuming it is successful, the company could replicate the technique on other small- to mid-size fields.

Statoil is considering its first trans-median line development in the North Sea involving a field in UK waters. The company has acquired First Oil’s 24% stake in license P312, containing the 60-MMboe Alfa Sentral gas/condensate discovery which extends into PL046 on the Norwegian side. Concept selection for a tieback to the Statoil-operated Sleipner complex was completed in September. Assuming agreement on unitization of the field between the two sets of partners, an investment decision should follow in late 2016 that could lead to first production in 2020.

In the northern part of the Norwegian North Sea, the company is looking to develop 20 MMbbl from the Shetland/Lista formation above the main producing reservoir for the Gullfaks field. According to the Norwegian Petroleum Directorate, the zones directly above the reservoir are under natural high pressure, complicating drilling on the field. Moving to production from Shetland/Lista could make drilling easier in the future. The NOK 1.8-billion ($217-million) program involves re-use of existing wells on Gullfaks. NPD has submitted its assessment of the proposals to Norway’s government.

Big turnout for Irish frontier round

The government expects to issue awards over the coming months, in the form of a two-year licensing option. This gives the holder the right to define the exploration potential and promote the acreage before applying for a 15-year frontier exploration license.

Dublin-based Providence Resources, the country’s most active licensee over the past 15 years, has signed a collaboration agreement with Schlumberger for the Goban Spur and southern Porcupine basins. The duo’s main goal is to de-risk Providence’s Drombeg, Druid, Dunquin South, and Newgrange exploration prospects. The company hopes the combination of its proprietary 2D and 3D seismic database, and gaining access to Schlumberger’s multi-disciplinary technologies, will help it attract a deepwater operator.

The Boskalis/Volker joint venture VBMS has installed an 18.5-km (11.5-mi) control umbilical connecting Wintershall’s new Ravn platform in the Danish North Sea across the median line to the company’s A6A platform in the German sector. VBMS configured the Ndurance with its Trenchformer burial system, allowing the vessel to perform the full installation, including direct pull-ins and the simultaneous laying and burying of the umbilical.