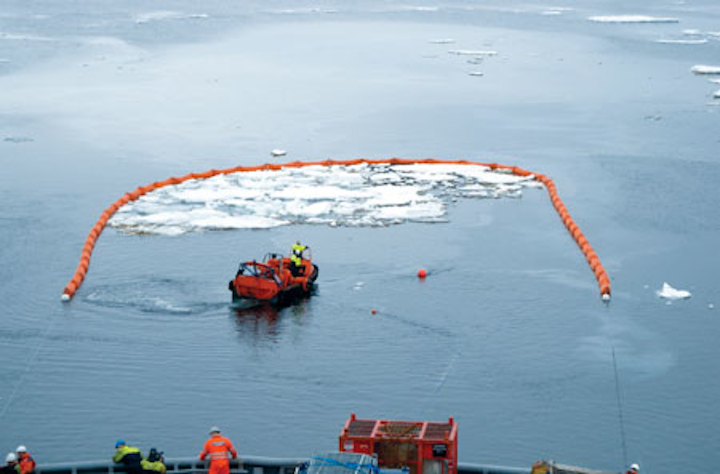 The Arctic region is estimated to hold 13% of the world’s undiscovered petroleum and 30% of undiscovered natural gas. As such, the region represents a hugely important area for supplying the energy demands of the future.

One of the committee’s recommendations was the establishment of a joint industry program (JIP) charged with undertaking targeted research projects in identified priority areas. The JIP on Oil Spill Response Technology was officially launched in 2012 and represents a pooling of knowledge, resources and insights from nine international oil and gas companies - BP, Chevron, ConocoPhillips, ENI, ExxonMobil, North Caspian Operating Co., Shell, Statoil, and Total. The JIP is supported by the International Association of Oil and Gas Producers and is the largest pan-industry program dedicated to this area of research. While the industry remains focused first and foremost on preventing any oil spill from ever occurring in the Arctic, it is also committed to be prepared for a spill, however unlikely. The ability to use a broad range of response options and adapt to changes in conditions is essential to mounting the most effective response possible in the region.

Creating international research programs to further enhance industry knowledge and capabilities in the area of Arctic oil spill response, the JIP looks at all aspects of oil spill preparedness, oil spill behavior, and options for oil spill response in the Arctic marine environment, to minimize any impact.

The controlled in situ burning (ISB) of an oil slick is a well-established response technology that has been the subject of research since the 1950s. ISB has also proved effective for oil spills in ice conditions, having been successfully employed to remove oil from storage tanks and ship accidents in Alaska, Canada, and Scandinavia since the 1970s. Significant findings from JIP-sponsored research confirms that there is a considerable body of scientific and engineering knowledge on ISB to ensure safe and effective response in open water, broken pack ice and complete ice cover. More than 40 years of research, including large-scale field experiments so far show that ISB is one of the response techniques with the highest potential for oil spill removal in arctic conditions. Results show that the technology already exists to conduct controlled ISB of oil spilled in a wide variety of ice conditions. Additionally, most perceived risks associated with ISB can be mitigated by following approved procedures, using trained personnel, and maintaining the correct separation distances between burning sites.

Herders are designed for application around the perimeter of surface oil, causing it to gather in a more concentrated location thus facilitating mechanical recovery or ISB. Research is being initiated to improve knowledge on the effects and performance of such herders in ice prone waters.

A lined, 8,400-sq m (90,417-sq ft) above-ground temporary test basin simulating arctic conditions was constructed in the Poker Flat Research Range outside Fairbanks, Alaska in late 2014, to host trials carried out in April 2015. These trials were the first operational combination of aerial application of herders and in situ burning, where herders were applied to an oil slick by manned helicopters.

The tests successfully demonstrated, for the first time, that applying herding agents and subsequently igniting a free-floating oil slick using equipment mounted on a helicopter is feasible. Aerial application of herders to enable in situ burning without booms is potentially a step-change advance for offshore oil spill response in both open water and ice, with response times much faster than vessel support. The initial results also indicated that oil spill responders should consider herding technology a safe, low-risk, and efficient method for enhancing proven ISB in light to medium ice concentrations where spills could rapidly spread and the use of fire containment booms is impractical.

Significant findings from the experiment show that dispersion was highly related to the amount of mixing energy applied during a test. Therefore, if natural mixing energy is too low, propeller wash from a vessel can be used to significantly enhance dispersion. Additionally, dispersion efficiency was not affected by ice concentrations of either 50% or 80%.

Research experiments on the use of polyethylene blocks (PE‐blocks) to improve dispersant effectiveness test repeatability were carried out to investigate if PE‐blocks behave similarly to natural ice, and therefore if they can be used in future dispersant and mineral fines efficiency testing. Findings from these tests showed that replacing PE-blocks with natural ice did not influence weathering or dispersant efficiency. However, the PE-blocks did behave differently than ice in the flume, so all experiments were performed using natural ice.

In addition to the three reports from Phase one of the project as mentioned previously, the JIP will be publishing a full report for all three phases on the organization’s website. Future research will include treating oil from these scenarios after it is released during the spring melt, or treating oil from a point release source before it enters the environment, together with examining dispersant injection during well-control events.

The first stage of this project collected existing information on the environmental effects of an arctic oil spill as well as the impact of the technologies used to respond to such a spill. The second phase adapted the format of the phase one report and literature database to support a web-based presentation of these materials as an education and resource tool for NEBA practitioners, stakeholders, and the public. In March 2015, the JIP marked a first with the launch of an online tool to aid arctic oil spill decision-making. The tool is the first time the substantial volume of existing research on the environmental effects of oil and oil spill response techniques in the Arctic has been compiled and reviewed in one place.

The ability to accurately detect and map oil-slicks is of particular priority in the Arctic region, as oil can be obscured from view by low visibility and periods of almost complete darkness, and/or hidden under snow and ice cover. The TWG has completed work with C-CORE and the Polar Ocean Services/Woods Hole Oceanographic Institute to conduct a technical assessment of existing and emerging surface and subsea technologies that included an evaluation of further research and development needs, logistical support requirements, and operational considerations including testing opportunities. Two reports outlining these findings have already been produced: “Oil Spill Detection and Mapping in Low Visibility and Ice - Undersea Remote Sensing” and “Oil Spill Detection and Mapping in Low Visibility and Ice - Surface Remote Sensing.” Findings so far indicate that the industry already has a range of surface and airborne imaging systems that can be deployed from helicopters, fixed-wing aircraft, vessels, and drilling platforms that are suitable for ice conditions. The analysis of data collected from all of the experiments will contain recommendations of sensors or sensor combinations for deployment in the Arctic.

The JIPs findings to date highlight that the industry is prepared and has a wide range of viable technologies for oil spill response in the presence of ice in open water. The industry also has a role to play in helping countries in arctic jurisdictions understand the benefits of having a regulatory process in place to approve the use of all of these response methods and technologies. As such, the results of studies will be published in peer-reviewed journals, and materials have been developed for the benefit of the wider audience interested in Arctic oil spill response, including NGOs, policymakers, and members of the environmental community.