Hurricane studies could lead to safer operations in Gulf of Mexico

The US Department of Energy, together with 19 energy companies, has funded the National Center for Atmospheric Research (NCAR) to undertake a research project titled 'Effect of Global Warming on Hurricane Activity in the North Atlantic' (07121-DW1801), to evaluate the impacts of global warming upon hurricane activity. 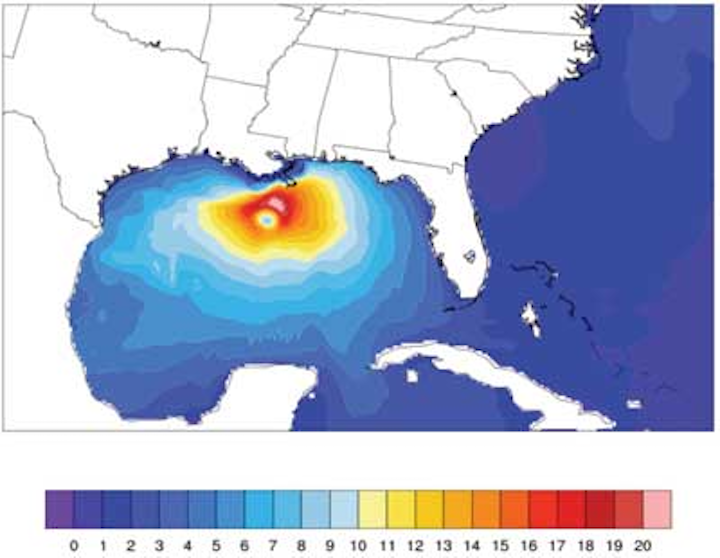 An understanding of the potential for weather development activity in the North Atlantic, that spawnsGulf of Mexico hurricanes, is crucial to offshore safety, energy security, and the national economy, according to a National Oceanic and Atmospheric Agency synthesis and analysis report stating that global warming might exacerbate hurricane severity.

The US Department of Energy, together with 19 energy companies, funded the National Center for Atmospheric Research (NCAR), with Principle Investigator Greg Holland, and the Georgia Institute of Technology in a project titled 'Effect of Global Warming on Hurricane Activity in the North Atlantic' (07121-DW1801), to evaluate the impacts of global warming on North Atlantic hurricane activity.

Dynamic assessment predicted that tropical cyclone intensity will increase, with average increases of ~7 ft (~2 m) toward 2050, but with larger increases in the strongest storms. This result was consistent between the 22- and 7-mi (36- and 12-km) domains. An additional pilot project that assessed changes in the most extreme hurricanes showed that the frequency of the most intense hurricanes (categories 4 and 5) are predicted to increase by 20 to 30%.

The observed shift toward the equator in cyclone activity over the past decade is predicted to continue with the region of maximum frequency shifting toward the equator by 100 to 150 latitude by 2050. This result is consistent between the dynamical and statistical assessments.

Sensitivity studies of details critical to the dynamic model setup, including resolution, storm detection and tracking criteria, and initial conditions have increased understanding of confidence levels. Specifically, increased model resolution resulted in more storms and an increase in average storm intensity. The sensitivity studies also highlighted preferred locations and timings of storm activity within the basin and within the hurricane season that is generally insensitive to details of the model.

Changes in storm activity within the GoM, as opposed to the Atlantic, are less certain due to the low number of storms and, therefore, small sample size. This provided motivation for a future research focus on developing statistical modeling specific to the GoM to generate large numbers of forecasts.

Phase I of the study focused on the development and application of a hurricane damage index specific to offshore facilities that translates hurricane parameters directly into quantitative damage assessments. In applying the index to storms in the dynamic model, forecast damage assessments were produced over the next 50 years. These show that although storms are projected to be more intense and, therefore, more damaging, changes in size and translation speed counteract this. Researchers are now engaged in Phase II of the study, which is being undertaken by the University Corporation for Atmospheric Research with partners Chevron Energy Technology Co. and Willis Re.

Phase II will provide knowledge to mitigate costs and future environmental impacts of GoM hurricanes damage to infrastructure, and further assess the need for hardening of existing facilities to maintain presently accepted risk level. As in Phase I, this research is being accomplished through close working relationships with industry partners.

The final product will be development of decision support tools that enable quantitative specification of the impacts of hurricanes on offshore industries based on model predictions. Included in the model predictions will be projected future changes in wind, waves, and currents.

Phase II is scheduled for completion in July 2015.

Results of the modeling and simulation allowed the industry to evaluate current design standards and regulations in relation to the probability of stronger GoM hurricanes or changes in other critical characteristics, such as number of storms and length of time in the Gulf, due to global climate variability and change.

Climate simulations were carried out for the North Atlantic, with a focus on the GoM. The large-scale climate component was provided by global climate simulations from the NCAR Community Climate System Model (CCSM).

This global climate model underwent review and testing by the scientific community, providing future projections of ocean and atmospheric changes in the North Atlantic under greenhouse warming scenarios. However, these global scale simulations are too coarse in their spatial resolution to model hurricane activity, so the research team inserted its Nested Regional Climate Model (NRCM) into the CCSM model for a closer look at the North Atlantic and, more specifically, the GoM. By nesting the regional model into the global model, the project team was able to conduct a series of downscaling simulations for current and future climate and hurricane activity in the GoM.

Model set up and testing were conducted, as were global CCSM simulations from 1950 to 2050. These were then combined with a set of statistical and analytical downscaling approaches to build a comprehensive analysis of how hurricanes might change, and how ocean surface and deep water in the Gulf is likely to change. The results combined 50-year hindcast and 50-year forecast for hurricane activity and oceanic conditions in the North Atlantic and GoM.