The Bahamian Senate has passed a Petroleum Bill and associated regulations, providing an updated framework for the next phase of hydrocarbon exploration around the islands. 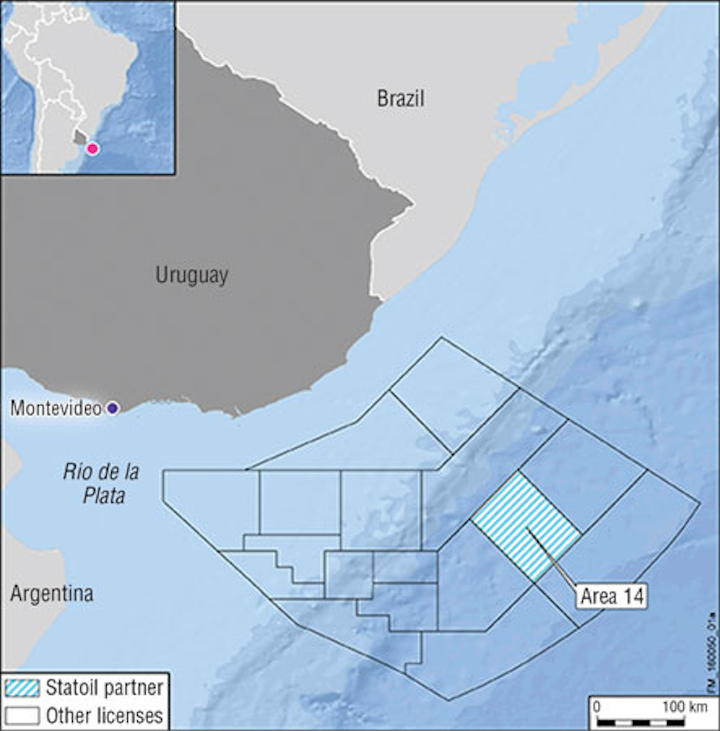 The Bahamian Senate has passed a Petroleum Bill and associated regulations, providing an updated framework for the next phase of hydrocarbon exploration around the islands. It should also clear the way for Bahamas Petroleum Co. to drill the country’s first offshore exploration well since the 1980s.

ExxonMobil may have started appraisal drilling on the Liza deepwater oil discovery in the Stabroek block offshore Guyana. The company and partner Hess are thought to be considering development via an FPSO.

Guyana’s government has signed a production-sharing agreement with Tullow Oil and Eco (Atlantic) for the 1,801-sq km (695-sq mi) Orinduik block in shallow water in the Suriname Guyana basin, close to Stabroek. Work commitments include acquisition of new 3D seismic.

Hocol Petroleum has approved formation of Ecopetrol Costa Afuera Colombia, which will be responsible for E&P offshore Colombia. Hocol is a subsidiary of Ecopetrol SA which currently manages offshore activity.

Petrobras’ oil production offshore Brazil last year averaged 2.128 MMb/d, an increase of 4.6% over the figure for 2014. The company’s presalt output increased 56% to average 767,000 b/d. Main contributing factors were growth from the Parque das Baleias field and from the FPSOsCidade de Mangaratiba and Cidade de Itaguaí in the presalt Santos basin.

Statoil aims to join Total and ExxonMobil in Uruguay’s first deepwater well, on the Raya prospect, after agreeing to farm into 15% of block 14. Completion of the deal is subject to government approval. Total has acquired 3D seismic data over parts of the concession, 200 km (124 mi) offshore in the Pelotas basin in water depths of up to 3,500 m (11,483 ft).

Premier Oil has completed definition of the Phase 1a development of the Sea Lion field in the offshore north Falkland basin. This will target 220 MMbbl, focusing on the northwest part of the field, with peak production of 85,000 b/d. Thirteen of the 18 planned wells will be drilled before first oil in 2020. SBM Offshore is working on front-end engineering and design for a converted FPSO, to be located 220 km (137 mi) north of the Falklands. Pre-first oil capex is estimated at $1.8 billion.

The recent re-drill of last year’s well on the Isobel/Elaine structure, which had to be terminated prematurely due to operational issues, encountered five separate oil-bearing sands. The location was 4 km (2.5 mi) west of the original well. Partner Rockhopper said analysis indicated an oil column of more than 480 m (1,575 ft), probably sufficient for a third-phase development of the basin.

Kosmos Energy has scored its first discovery offshore Senegal. The drillshipAtwood Achiever drilled Guembeul-1 in 2,700 m (8,858 ft) of water in the northern part of the St Louis Offshore Profond license. The well delivered 101 m (331 ft) of net gas pay from two reservoirs in the lower Cenomanian and the underlying Albian. Results suggest communication with Kosmos’ Ahmeyim (ex-Tortue) gas discovery 5 km (3 mi) to the north off Mauritania. The company has signed a memorandum of understanding with the state oil companies of both countries concerning potential development of the collective resource, named Tortue West, which it estimates at 17 tcf.

Yinka Folawiyo Petroleum could begin production from the Aje gas/condensate field this month, according to partner Panoro Energy. The FPSO, built in Singapore, should be on location: subsea installations were due to get under way in February. Aje is 24 km (14.9 mi) offshore western Nigeria in a water depth of 3,000 ft (914 m).

Shell, however, has postponed a final investment decision on the deepwater Bonga Southwest project off Nigeria, due to budget constraints as a result of lower oil prices.

Schlumberger has signed a heads of agreement with Ophir Energy that would give the contractor a 40% stake in the Fortuna FLNG project offshore Equatorial Guinea. If this leads to a definitive agreement, Schlumberger would reimburse Ophir for 50% of its past costs, covering the latter’s share of capex until first LNG sales. Schlumberger also signed an agreement with the Fortuna vessel provider Golar to jointly develop gas reserves via FLNG technology.

Vaalco Energy has decided to postpone its crude sweetening project for the Etame area offshore Gabon until the oil price recovers. A study identified more than 15 solutions for removing hydrogen sulfide from produced fluids in the area, but none were economic at current prices.

Dynamic Industries is close to completing refurbishment of a production platform for Eni’s Nene field offshore Republic of Congo. The facility should be loaded out from the company’s Gulf of Mexico yard in May.

Offshore Angola, Eni has delivered first oil from Mpungi, the latest satellite tie-in to the West Hub development in block 15/06, 130 km (81 mi) west of Soyo. Following the earlier start-ups on the Sangos and Cinguvu fields, production should ramp up to around 100,000 b/d, with three more fields to be connected. All are developed via clusters of wells in water depths of 1,000-1,500 m (3,281-4,921 ft), connected to the FPSON’Goma.

CGG is conducting a four-month multi-client airborne gravity and magnetic over two blocks offshore South Africa. These encompass three little explored basins in the West Bredasdorp area off Cape Agulhas and the Eastern Margin area offshore Durban. Resultant data should be available for licensing in mid-year.

Italy’s Ministry of Economic Development has turned down Rockhopper Exploration’s application for a production concession for the Ombrina Mare field area in the Adriatic Sea. This follows the government’s decision to re-impose a ban on E&P activity within 12 nautical miles of the Italian coast.

Total has reportedly bid for block 2 in the Ionian Sea offshore western Greece, in partnership with Hellenic Petroleum and Italian company Edison. This was one of 20 offshore blocks offered under last year’s Greek bid round off the western mainland and south of Crete. Hellenic is understood to have applied for two other offshore concessions.

Cyprus’ government has waived a requirement for follow-up drilling on offshore block 12 by the May 23 deadline. This follows the transfer of rights of 50% in the block to BG Group. Noble Energy and its partners had requested the postponement, and had also sought changes to the work program.

Saudi Aramco and National Shipping Company of Saudi Arabia (Bahri) have signed an amended memorandum of understanding concerning establishment of an in-Kingdom maritime complex. This would provide manufacturing and repair services for offshore rigs and service vessels. UAE fabricator Lamprell and Hyundai Heavy Industries aim to participate in the venture.

Zakum Development Co. (ZADCO) has contracted Ramboll Oil & Gas to perform an integrity study of 15 subsea pipelines serving the Zakum oil field offshore the UAE. Production from the field started in 1983: ZADCO hopes to use results from the survey to extend the design/service life of selected pipelines by a further 20 years.

Tanzania Petroleum Development Corp. has set aside land at Machenga Bay for development of a new LNG terminal. This will receive gas from the country’s various deepwater discoveries. Ophir Energy, one of the block partners, expects Shell to assume operatorship of the project after completing its acquisition of BG Group.

Lundin Petroleum plans to sell the FPSO serving its Bertam oil field on block 307 offshore peninsular Malaysia to m3nergy Investment for $265 million. Last year Lundin completed a life extension/upgrade program on the floater, which began operating in April. Elsewhere in the region, the company has agreed to farm out 15% of block PM328 in the Malay basin and 20% of three blocks offshore Sabah to the Netherlands-based independent Dyas.

SapuraKencana Petroleum has canceled conditional agreements signed in late 2014 with Petronas for stakes in five concessions offshore Vietnam. These are blocks 01/97 and 02/97 in the Cuu Long basin; blocks 10 and 11 in the Nam Con Son basin; and block 46-Cai Nuoc in the Malay-Tho Chu basin.

CNOOC has produced first oil from two new developments in the Beibu Gulf basin in the South China Sea. The Weizhou 12-2 project, in 36 m (118 ft) of water, takes in the Weizhou 12-2 and Weizhou 12-1 West oil fields and the northern part of the Weizhou 11-2 field. Facilities include three wellhead platforms with a total of 18 wells, generating around 16,000 b/d. The other project is Weizhou 11-4 North Phase II, which involves connecting two wellhead platforms and 15 producer wells to existing facilities. Here output should reach a peak later this year of 8,000 b/d.

FMC Technologies will supply subsea production systems for the Greater Western Flank Phase 2 scheme, the fourth major gas development over the past seven years for the North West Shelf project off Western Australia. This is designed to develop 1.6 tcf from six fields tied back to the Goodwyn A platform via flowlines. FMC’s scope includes subsea trees, wellheads, controls and connection systems, with deliveries due to start later this year.