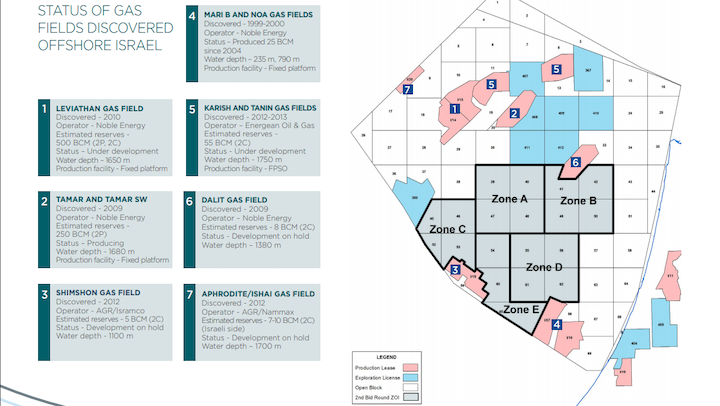 Status of gas fields discovered offshore Israel and the blocks offshore under the country's second bid round.
Israeli Ministry of Energy

TEL AVIV, Israel – Two consortia have submitted proposals to explore 12 of the 19 blocks on offer under Israel’s second bidding round.

The first group comprises Cairn Energy, Soco International and Israeli company Ratio Oil Exploration, while the other brings together Energean, an established player in the Israeli offshore sector, with Israel Opportunity.

Minister of Energy Dr. Yuval Steinitz said: “The proposals that we received will increase significantly the number of oil and gas exploration licenses in Israel’s Exclusive Economic Zone, from eight to 20.

“The arrival of additional European companies to Israel combined with the fact that the Leviathan platform will soon be connected to the shore, and the ongoing work on the development of the Karish field, will lead to the breakup of the monopoly and enhance competition in this sector.

“We are continuing to work towards transforming Israel into a regional energy power.”

It had decided on this course in order to provide a higher degree of compatibility between the geological structures within the exploration areas. Holding larger exploration areas will allow the companies to conduct more extensive and thorough geological and geophysical surveys, the Ministry reasoned.

Exploration licenses will be granted for a three-year period during which the licensees must undertake their proposed work programs over the entire area offered.

They can then apply for a two-year term extension, the conditions to include drilling a well in a least one of the licenses, with further extensions available of up to seven years pending drilling programs on all the other licenses awarded.

Israel plans to stage a third licensing round in 2021.