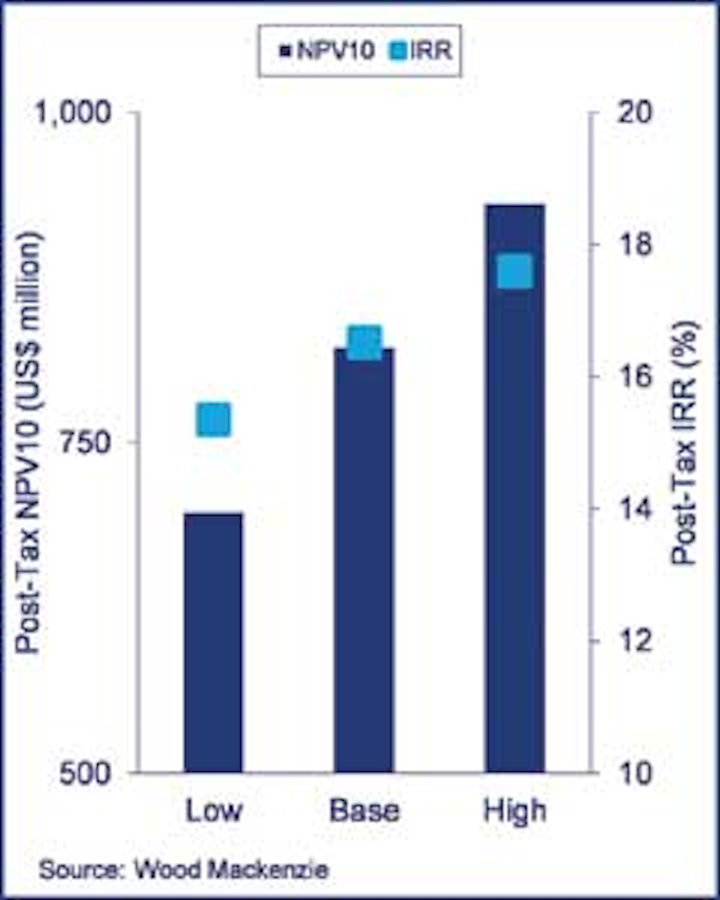 For a model Middle Miocene, single-well subsea tieback, the base case NPV is $284 million and IRR is 60.4%. An additional month of production each year increases the project valuation by $15 million and increases IRR over 3%. For a multi-well tieback, the change is proportional. A three-well tieback can see an increase NPV more than $50 million.

In the low case, production in earlier years is reduced and field life is extended, decreasing near-term revenue and increasing total operating costs. For the model Lower Tertiary field, producing the equivalent of nine months a year reduces NPV by 15% or $125 million. For the Middle Miocene field, NPV drops by 6% or $17 million. In both cases, the downside of losing a month of production a year outweighs the increased value from producing an extra month. To mitigate these risks, operators may choose to shorten field life and recover less reserves. However, this still likely reduces the overall valuation of the field.

Although three days a month seems like a small number, over the period of a larger field's life, this can defer production by years. In cases like Hurricane Ike, shutting-in production is unavoidable, but the effects can be mitigated by developing adequate contingency plans to bring production on sooner. Beyond that, optimizing maintenance, workovers and side tracks to limit non-productive time can improve a field's economics and increase earlier cash flows. Furthermore, operators should review redundancy and reliability of production equipment to limit time-consuming maintenance and preserve value in the long term.

The Lower Tertiary model assumes sanction in 2018 with first production in 2023 and the field developed via a standalone, wet-tree facility with third-party built oil and gas export lines transporting hydrocarbons to shore. The field was assigned recoverable reserves of 300 MMboe.

The Middle Miocene model assumes sanction in 2016 with first oil in 2018 and the field developed as a single-well subsea tieback to nearby infrastructure. The field was assumed to have recoverable reserves of 22 MMboe.

The low, base, and high cases were generated by varying the number of months a year a field was producing, from nine to 11 months. The field life varied between cases; however, all wells were permanently shut-in after oil production dropped below 300 b/d.