Tullow Oil has farmed out 85% its 100% interest in block C-18 offshore Mauritania to Total, Kosmos, and BP. 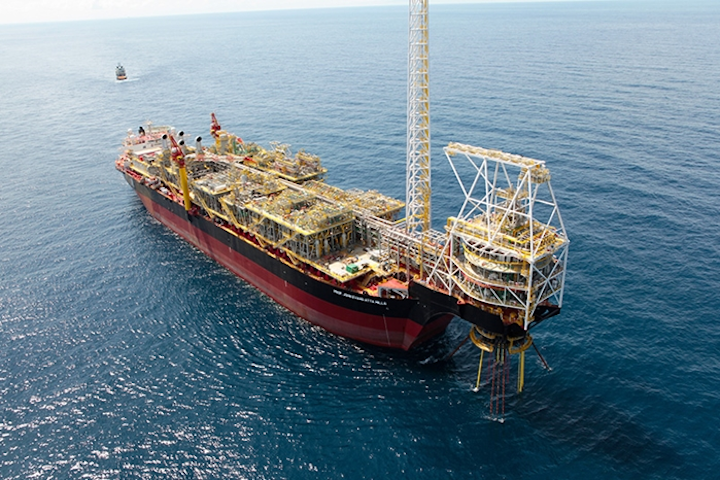 LONDON – Tullow Oil has farmed out 85% its 100% interest in block C-18 offshore Mauritania to Total, Kosmos, and BP.

The partners have secured a two-year extension to the license terms, and new operator Total has initiated a 9,000-sq km (3,475-sq mi) 3D seismic survey over the acreage, due to be completed in the current quarter.

Offshore Namibia, Tullow plans to drill theCormorant prospect on the PEL37 license in Namibia during the second half of this year and preparations for the program are under way.

The company is targeting light oil, with numerous other prospects of a similar size nearby.

Preparations continue ahead of the forthcoming turret bearing stabilization program on the FPSO, expected to take place over two shutdown periods lasting four to six weeks.

A further three-week shutdown is planned around year-end to rotate the FPSO to its permanent heading.

The initial focus will be on drilling and completion of new wells in the Jubilee unit area tied into existing infrastructure, and the completion of a well previously drilled on the Mahogany discovery.

At theTEN fields, output last year averaged 56,000 b/d, higher than expected and due to production and water injection optimization measures.

During November and December, production exceeded 70,000 b/d. This year, the company is forecasting an average of 64,000 b/d.

Following theITLOS ruling on Ghana’s maritime median line with Côte d’Ivoire, a multi-year incremental drilling program will start this year, designed to increase production further from the TEN fields in order to use the FPSO’s full capacity and sustain this for years to come.

In 4Q 2017, Tullow signed the TEN associated gas gas sales agreement with the government and the company expects first gas sales from TEN before mid-year, with gas sales for the year equivalent to 4,200 boe/d.

TheMaersk Venturer should start work next month on wells across the TEN and Jubilee fields.

The company is working on sequencing of further wells to optimize output from both fields, and the partners will evaluate whether to contract a second rig to allow the acceleration of the dual drilling campaign.