Premier Oil has agreed to pay BP $625 million for its interests in the Andrew and Shearwater areas of the UK central North Sea. 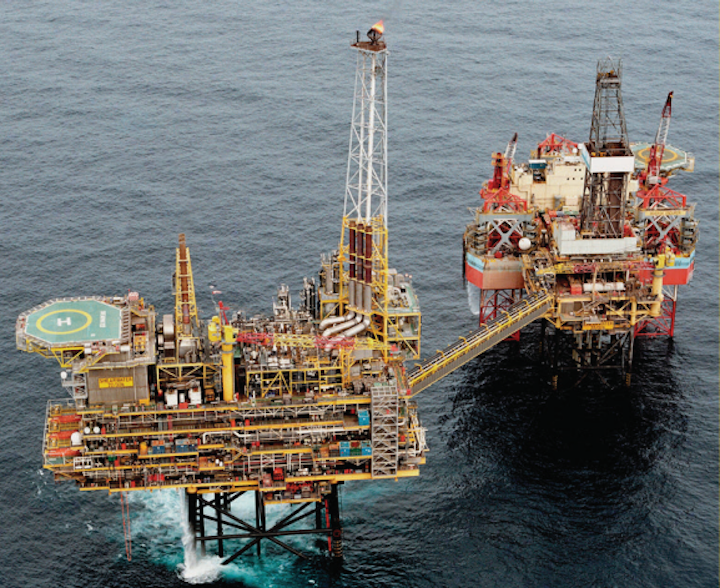 The Shearwater field is a high-pressure/high-temperature reservoir produced through a process, utilities and quarters platform in the UK central North Sea.
(Courtesy Shell)

LONDON – Premier Oil has agreed to pay BP $625 million for its interests in the Andrew and Shearwater areas of the UK central North Sea.

The Andrew Area, where BP has 50%-100% operated interests in five fields, currently produces around 18,000 boe/d net to the company.

Premier sees upside potential in the near term through further development of the Andrew Lower Cretaceous reservoir.

At the Shell-operated Shearwater, Premier would gain a 27.5% interest and 25 MMboe of reserves and resources, with incremental investment opportunities and tariff income.

In addition, the company has agreed to pay Dana Petroleum $191 million plus contingent payments of up to $55 million for a further 25% interest in the Tolmount gas field in the UK southern North Sea, which Premier operates.

Premier plans to fund these purchases by raising $500 million of equity (net of expenses), and if need be, an acquisition bridge facility of $300 million.

In an accompanying trading statement, the company said Tolmount is on schedule for start-up by the end of this year and is below budget.

The platform, under construction in Italy, is due to be loaded-out in April. Coating of the linepipe is nearing completion and an offshore pre-anchor route survey has been conducted ahead of pipelay, planned for June.

Development drilling is on track to start in mid-year.

Following last October’s nearby Tolmount East discovery, the company is performing front-end engineering design studies for both platform and subsea concepts for a development via the Tolmount infrastructure.

It hopes to achieve sanction of the project during the second half of the year.