An array of leak detection methods are available for assessing the integrity of subsea oil and gas pipeline systems. These methods include (but are not limited to) the use of acoustic, fiberoptic, sensor-based, fluorescent, and internal leak detection systems and technologies. 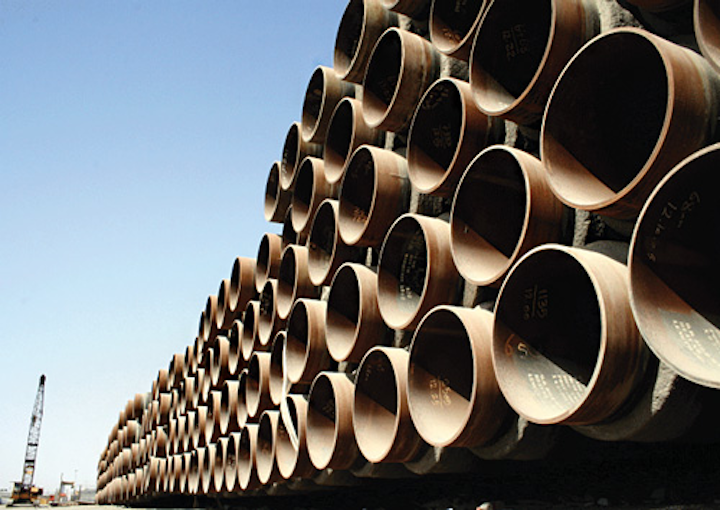 An array of leak detection methods are available for assessing the integrity of subsea oil and gas pipeline systems. These methods include (but are not limited to) the use of acoustic, fiberoptic, sensor-based, fluorescent, and internal leak detection systems and technologies.

A recent case study of leak detection and rectification on a 110-km, 4-in. piggy back pipeline in 80 meters of water highlights some of the challenges and possibilities associated with these types of operations. In this case, acoustic pipeline leak detection methods were deployed, along with fluorescent technologies and optical cameras.

A leak was detected during a hydrostatic test operation. The first option to identify the leak point with fluorescent technology, and so a pertinent marker was added into the fluid.

To save the cost and time, the leak detection operation started from the points which were more susceptible to leak, particularly the flanges. Unfortunately, after five days of continuous monitoring, the leak point had still not been detected.

So, the next step was to deploy an ROV that had been outfitted with an optical camera, which had been designed to detect the fluorescent dye. But, due to the current on the seabed and a lower flowrate, the ROV and its mounted camera was not able to detect a leak. Thus a decision was made to deploy acoustic leak detection (ALD) technologies on a small vessel, a DP-2 vessel, and also on an ROV.

Leak detection operations were performed on three portions of the pipeline system: from landfall point to KP 1; from KP 1 to the end of pipeline KP 110; and on spool pieces along with riser.

During the time of the survey, the pipeline was placed under pressure at about 200 bar. In the case of the ROV, its speed was set to a minimum of 0.3~0.4 knots. If noise was received, speed would be reduced to 0.1 knot. So the speed of the vessels and ROVs were important parameters in this case.

Inspection on subsea pipeline with the ALD system was performed as follows:

• ROV acoustic sensors were available as an optional method

• Dye detection systems were also available as an optional method.

Acoustic leak detection technologies can be deployed in the vertical mode, tow fish mode, diver mode and/or with an ROV acoustic sensor. These modes are described below.

ALD vertical mode. Multi-beam sonars are installed on the clump weight to monitor the pipeline position. Inspection speed will be about 0.8 knots. The vessel should be DP-1 or better; the sensor position shall be monitored by a USBL (underwater positioning system). The CW (clump weight) is a simple steel object which can be easily manufactured onboard or on site with a welder and scrap material.

ALD diver mode. This technology has been designed to detect leak on flanges, valves, and other critical components or short pipeline segments. The ALD acoustic sensor is hand held by a diver while, on the support vessel, a specialized operator monitors the acquired data.

ALD tow fish mode. The area between the landfall and the end of the section surveyed in vertical mode (estimated KP 8.00, depth 40 m) was inspected by ALD tow fish technology. Here, the fish are kept not more than 10 m above the pipeline. The tow fish will not dive more than 10-15 m when operated from the small vessel. For this reason, from depth 20-25 m, the shallow water procedures shall be substituted by standard ALD tow fish procedures.

ROV acoustic sensor. The same sensor realized for ROV installation is applied to vertical mode inspection. The sensor is directive and highly sensitive. In order to minimize electric interference, the sensor includes the pre-processing electronic systems.

Dye detector. An optical sensor for dye (i.e. fluorescent) detection can be connected and fixed to the acoustic sensor. Optical data are multiplexed with acoustic data and sent through the same transmission line so that the sensor can be added without any additional requirement.

Data from the two sensors can be monitored simultaneously so that optical and acoustic inspection can take place at the same time.

There are no standard criteria to evaluate and certificate the performances of an acoustic leak inspection system. The ability of any technology to detect a leak depends upon a large number of parameters like: differential pressure, leak flow, leak size and shape, leak position, pipeline content, ambient noise, leak to sensor range, etc. The best parameter to keep into consideration for this purpose is the dimension of the leaks detected on the field.

After the leak was located using ALD technology, the system was shut down and the pipe was replaced in the damaged section. The damaged specimen was sent to the laboratory, where a defect was observed on the weld metals.

The main reason for this failure was the weld defect, which was due to lack of fusion and excess penetration. So, the welding defect led in turn to a failure during the hydrostatic test.

In some cases, the pipeline is not capable of tolerating the pressure during the hydrostatic test; and pressure drop will make it difficult to increase the pipeline pressure in order to detect a leak by fluorescent or acoustic leak detection. So, in many cases an ROV survey would be the best option to check any rupture or separation for the subsea pipeline.

In a given leak detection scenario, if the pressure drops fast and the size of the leak is medium or large, there is more possibility to find the leak, and a wider variety of solutions may be applicable. But in situations where the pressure drop is less, acoustic leak detection technologies may be the most effective option. With smaller leaks, it may be difficult to find the leak by ROV or diver because of current and minimum flow of the leakage.

For the rectification of the leak, it may be best to concentrate on local repair, and consider use of a smart clamp, which can be used as a temporary or permanent repair on subsea pipeline.