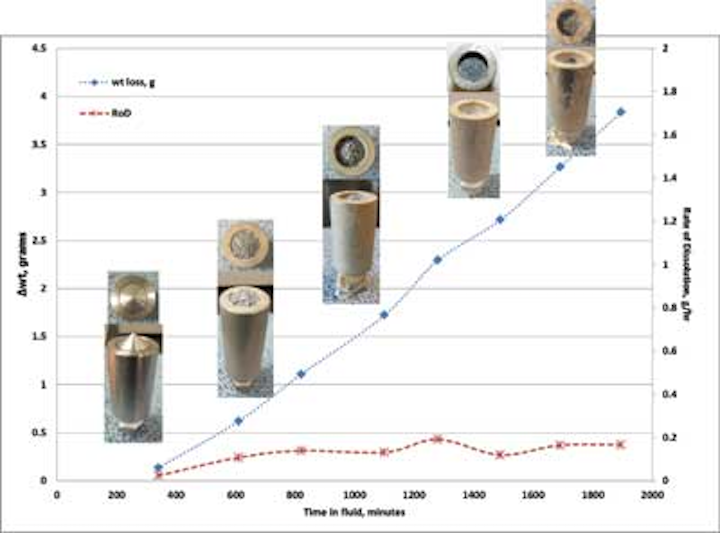 The nanostructured composite was then incorporated into a smart gas lift valve design in the form of a time-controlled disintegrable barrier or plug. Assembled in the nose section of the valve, the disintegrable barrier replaces the two nose holes in a standard valve design, while retaining the same geometry, cone-shaped nose tip and the reverse flow check dart design of a standard gas lift valve.

Prior to introducing a smart gas lift valve into the field, extensive laboratory testing was performed to determine the in-field operating parameters within which the valve would safely and reliably operate. Disintegration tests were conducted in different fluids at 200°F (93°C) and 1 atmosphere pressure. The results of these tests showed that the composite material is resistant to oil-based drilling mud, slightly reactive with fresh water or cement, and rapidly disintegrates in 3% KCl brine or seawater. This makes it ideal for offshore gas lift valve applications.

In another series of disintegration tests, the time-controlled disintegrable plug was assembled in a fixture that duplicated the standard gas lift valve nose design and was submerged in seawater at 275°F (135°C) and 500 psi (34.5 bar). The mass loss of the plug due to the disintegration reaction with seawater was measured at various time intervals. The test was stopped at 31.6 hours, when the plug lost most of its fluid-sealing dimension. The plug disintegrated uniformly throughout the test period at an average rate of 0.18 g/hour. The test verified that the plug design could meet the required 12-to-50 hour disintegration/conversion time for the dummy valve to become a live valve for gas lift.

In the Gulf of Thailand's Platong field, located 245 km (152 mi) east of mainland Thailand, the number of wells on gas-lifted production has gradually increased from 10% in June 2008 to more than 50% of current total field production. A major driver for this increased usage of gas lift is the reduced cost of installation. For example, in a monobore completion (a process in which a single production tubing size is used from the pay zone all the way to the surface of the well), the total cost of a one-trip cement through completion with gas lift is $1.67 million. This is a one-third reduction when compared to the $2.50 million cost of a conventional completion with casing and a separate upper and lower completion.

In a one-trip monobore gas lift completion, operators installed SPMs with the conventional live orifice or gas lift valves in the production tubing to prepare the wells for gas lift. Multiple slickline trips were necessary and costly completion failures occurred, including flow cutting of the reverse flow check valve during an unplanned pressure reversal. The failures occurred because the live gas lift valves were unable to hold the pressure as well as dummy valves while pumping cement through the SPM or activating the hydraulic packer.

The operator called Baker Hughes to install its time-controlled disintegrable plugs as part of a smart gas lift valve solution. The smart valves were installed in the SPMs prior to running the SPMs downhole, and then performed precisely as designed. The nanocomposite temporary dummy valves successfully isolated the annulus from the tubing and provided a proper pressure seal time for cementing and pressure testing operations to be completed. The plugs then disintegrated in brine during the cleanup process, converting the system to live valves for gas lift. The use of smart gas lift valves eliminated multiple slickline trips or well interventions after completion, saved service costs, and reduced health, safety, and environment risks.

Based on a paper presented at the SPE Deepwater Drilling and Completions Conference, held Sept. 10-11, 2014, in Galveston, Texas.