Red Hawk stands as first spar ever decommissioned in GoM 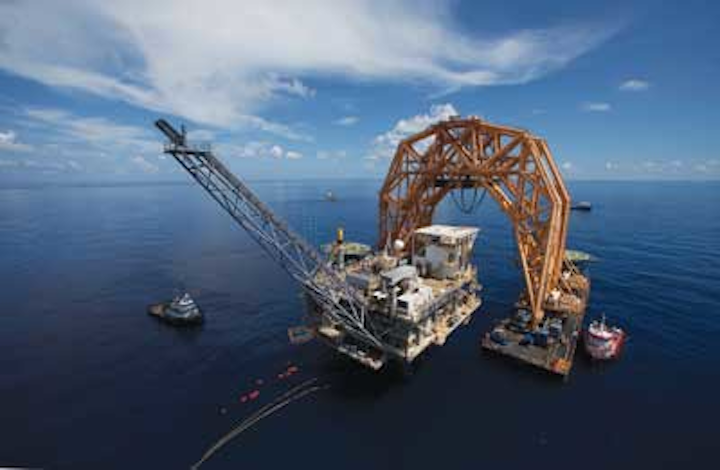 The Technip-built cell spar was originally designated for use in the Red Hawk gas field, located in 5,300 ft (1,615 m) of water in the GoM's Garden Banks block 876. It was a third-generation spar pioneered by an Anadarko predecessor, Oklahoma City-based Kerr-McGee, and was brought into production just 24 months after sanctioning, when the first of two of the Red Hawk gas field's subsea wells began producing in July 2004. Red Hawk field was estimated by the operator to have a resource base of 250 bcf of natural gas. Located less than 200 mi (322 km) away from several other developments in which the company held interests, including the Boomvang, Nansen, and Gunnison fields, it was designed to be a hub for future projects, lowering the economic margin for development.

Part of that economic feasibility was due to its design of the spar itself, explained Ryan Kavanagh, facilities engineer for Anadarko. The Red Hawk spar, which measured 64 ft (19 m) in diameter and was 560-ft (170-m) long, comprised of six tubes, all connected by structural steel, and all surrounding the final, seventh tube. The tubes were 20 ft (6 m) in diameter.

Such a design allowed the fabrication to be carried out domestically, rather than in Europe, as had most other spars. The Red Hawk spar components were manufactured in several different yards in Texas, which significantly saved cost. Kavanagh said that the technology used was "closely-aligned to industry-proven jacket fabrication techniques," so local fabrication was a strong option.

What made it possible was the ability to take plate and roll it into tubular, cylindrical sections, Kavanagh explained, which was used for pile and jacket fabrication in all different diameters. "It's the rolling of a steel plate into a can ... whereas you don't roll a spar hull that's just a classic spar or a truss spar," he noted.

Additionally, its design, already notable for its size, made the spar notable for something else. Up until the Red Hawk spar, one primary use for deployment was their ability to use dry trees.

"This was the first wet tree-only spar, which proves that the spar technology could be economic even when you didn't need it for the dry tree benefits that it offered," Kavanagh explained. FMC Technologies performed the subsea work, including the creation of the spar's enhanced horizontal 10,000-psi trees.

Having successfully produced the targeted resources, Red Hawk's wells, along with its spar, went offline in 2008, with the wells being P&A'd in 2011.

Kavanagh said that Anadarko explored a variety of options before deciding to decommission Red Hawk prior to Anadarko's lease expiry on the block in 2012. Reusing the facility on another field was not deemed feasible. The unit had also been made prior to the string of Category 5 hurricanes that ripped through the Gulf of Mexico, so should it be re-purposed, modifications would have been necessary. Nobody wanted to scrap a years-old facility.

Therefore, the Red Hawk spar, the GoM's deepest facility to ever be decommissioned, continues to produce even in retirement: It was decided that the structure would be reefed in Eugene Island block 384, off Louisiana. It now functions as a marine life habitat.

Early planning for the decommissioning began in 2011. Kavanagh said that Anadarko worked with several regulatory agencies involved with the Bureau of Safety and Environmental Enforcement's Rigs to Reefs program. Laid on its side, the spar would be an ideal candidate, and would even improve the natural environment of the GoM in some regards.

"Actually, one of the things that most excited the Louisiana Wildlife and Fisheries team about the spar becoming an artificial reef was because of the soft, sandy bottom of the Gulf of Mexico. It doesn't have a lot of cavernous, hard surfaces for marine ecosystems to develop on," he said. "The spar would be able to create a really unique habitat in the Gulf of Mexico, something that they can study in the future and see what kind of positive impacts it has, and how that will impact the future projects."

Anadarko and its contractors began to mobilize, including InterMoor, the project's main contractor, whose scope of work included engineering, offshore work, decommissioning, towing, ballasting and deballasting, mooring disconnect/recovery, and reefing.

The decommissioning work would take place during a 24-day period in the heart of hurricane season, between August and September 2014. Kavanagh said that planning for a decommissioning was more than just considering the project simply the opposite of a commissioning.

"It's different mentally and emotionally to have something one day and know that the next day it's gone; you won't have it anymore," he said.

Versabar's VB 10,000, a fully-automated DP-3 barge-mounted dual truss system, was used for the removal of the 3,800-ton (3,447 metric ton) topsides. The company says it is the largest lift vessel to be built in the US, with a hook height of 178 ft (54 m) and a lift capacity of 7,500 tons (6,803 metric tons). Versabar says that it was the first time the VB 10,000 had performed a lift on a floating facility. The topsides were floated, which meant that there were two independent floating structures, something else that required much planning and engineering.

Todd Veselis, general manager, Permanent Moorings for InterMoor, said that because the topsides were removed completely, workers had to ballast the hull down exceptionally low – down to around 15-20 ft (4-6 m) of freeboard, he said– so that the VB 10,000 could completely lift the topsides off and to transport them for recycling.

Additionally, the entire operation had to be storm-safe. Nobody could wait for perfect weather in the hurricane-prone GoM to perform any part of the decommissioning. For example, deck legs, which took one day each to cut through, were pre-cut and then re-attached with a temporary clip, albeit one strong enough for a 10-year GoM hurricane, Kavanagh said, noting that the company worked with agencies including the Coast Guard and other agencies to ensure that these implements were necessarily robust.

Decommissioning the Red Hawk spar, with its unique air-over-water ballasting system, would represent InterMoor's first time to work in ballasting and deballasting.

"We had to engineer a separate, remote ballasting system to be able to facilitate the topside lift," Veselis explained. "Then, once the topsides were gone, we had to deballast the hull so that we could finish the mooring disconnect; then eventually tow to the reefing site; set it on bottom; and then do the actual reefing."

Of course, InterMoor also had to plan for the spar's rapidly-diminishing parts and pieces. With the mooring system running from the topsides, much engineered preparation was necessary prior to the lift. The six-point mooring system led to one work chain. InterMoor cut the work chain into three sections and attached these to the mooring chains on one side of the hull. The mooring lines were then slacked three to one side prior to topsides removal.

That alleviated tension for the entire system, Veselis explained. It also allowed for topsides removal and formed as the basis for the removal of the mooring.

After VB 10,000 removed the topsides, another vessel was called in to assist with removing the spar: McDermott's Derrick Barge 50, a DP-2 heavy-lift and lowering vessel. Veselis said it acted as a staging area throughout the operation, in addition to ballasting, towing, reefing and mooring disconnect, accommodation, and support services.

The spar hull was ballasted back up, and DB 50 removed the spar hull, with Kirt Chouest remaining behind for mooring recovery.

Veselis saw the Red Hawk spar as a lifetime project: InterMoor, as a predecessor company, was involved with the installation, and he was a project engineer on the original installation. That information, along with the companies' pre-existing relationship, helped operations run smoothly.

Kavanagh said that during the peak of decommissioning, there were more than 300 workers offshore spread out across multiple vessels.

"With a few minor exceptions, including weather delays, the operation ran smoothly, which is credited to a comprehensive planning phase," he explained. "A great deal of practical experience was gained through the decommissioning of Red Hawk that will be applied to future projects both for Anadarko and the industry."