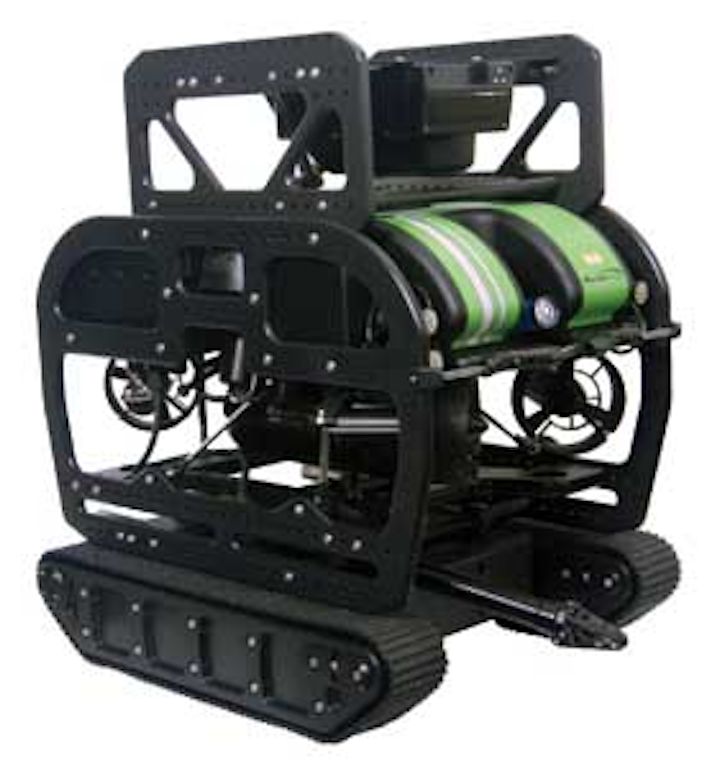 A new, nimbler class of ROVs, called "miniROVs," is cutting and crawling a path through today's offshore oil and gas industry. These new tools not only match the capabilities of their larger, work-horse brethren for some tasks, but also can be superior for certain offshore applications such as work restricted spaces, hull inspections.

MiniROVs are larger than "micro ROVs," which have less thrust to work in currents and an available payload of only a single camera, lights, and perhaps one or two sensors. With their larger size, miniROVs can carry a broader, suite of sensors, tools, and other technologies.

MiniROVs are, however, smaller than standard observation-class ROVs, which generally require launch and recovery systems (LARS). A miniROV requires no such system. It can be deployed and retrieved using its own tether, if the tether is strong enough. Some can handle a 100 kg (220 lb) payload.

MiniROVs were designed initially for shallow water, simply because there were a number of challenges that needed to be met before they could operate at depths greater than 1,000 m (3,048 ft). These included the miniaturization of control electronics, the design of lighter weight pressure housings, the need for power and data transmission over very long cable/tether/umbilical lengths, and more.

Over the past decade, the ROV industry has overcome these challenges to the point that miniROVs emulate many of the capabilities of larger systems. Additionally, some miniROV manufacturers have developed new technologies that have proven useful offshore.

Tethers become a problem for all ROVs in deepwater. The longer, thicker, and coarser an ROV's tether is, the greater its cumulative drag and, therefore, the greater the thrust the ROV requires to maneuver reliably.

Smoothening a tether is a non-issue, as cable sheathes are now rather smooth, but thinning the cross-section of a tether has been a difficult proposition. MiniROVs must transmit and receive many signals, and, sometimes, a considerable amount of power. This requires layers of wiring, shielding, and fiber.

Now, however, largely thanks to Ethernet extension technology, the cross-section of tethers has narrowed to 8.99 mm (0.345 in.), considerably narrower than traditional ROV tethers which may average 20 mm (0.787 in.). Once Enable-IT Inc., inventors of Ethernet extension technology, was able to miniaturize deep sea-worthy Ethernet extenders, miniROV manufacturers have been able to multiplex transmissions and send power over Ethernet (PoE) to miniROVs using one to two pair of standard copper wiring. These Ethernet extenders can seamlessly drive this data and power many thousands of feet, well past the regular Ethernet's distance limit of 100 m (328 ft), with no bridging in between. This means fewer wires and results in a thin, all-copper tether that exerts less drag on the miniROV. This also means a miniROV can often be lowered into the water by hand, without the need for a launching system.

Another advancement is the non-magnetic vortex generator, which, when used as part of a "crawler" attachment, allows miniROVs to crawl pipelines, hulls, and other structures. Using an impeller instead of magnets or thrusters, vortex generators create a low-pressure pocket (venturi effect) beneath the crawling miniROV, yielding up to 28 kgf (kilogram force), or the equivalent of a 62-lb force of attraction against any flat, hard surface.

Such a system holds several benefits. It yields sufficient attractive force to maintain precise operations while a vessel is in motion at sea or is experiencing strong currents while anchored. This allows operators to survey vessels more safely and economically than by using dive teams, particularly in more hostile environments. It also means cameras and other equipment such as imaging sonar produce high quality images and data, because these devices are kept at a consistent distance from the target structure. Furthermore, with such stability, miniROV operators experience less fatigue.

Previously, the technologies required for automated navigation, such as Doppler velocity logging, were too difficult to sufficiently miniaturize for miniROV use. However, automated navigation of miniROVs has become a reality within the past five years. Using a form of sonar tracking, miniROVs can lock onto a target and navigate by waypoint, hold a position, conduct a programmed search, and more. In fact, one miniROV can reliably orbit its locked-on target.

The benefits of automated navigation include reduced operator fatigue, thereby increasing their chances of successfully completing other tasks such as data monitoring. Additionally, to the degree that an application can be automated, such navigation holds the potential to save operators time and money.

Due to their size, agility, and newfound capabilities, miniROVs do well at rounding out the abilities of their larger brethren. Such was the case when FMC Technologies Inc. needed to cap three subsea manifolds which were missing small valve caps but were already installed on the seabed. Oil production could not begin without these caps in place, and recovering three 160-ton manifolds to install these caps would cost millions of dollars. FMC turned to ROVs to try and solve the problem but quickly realized that neither work-class nor observation-class ROVs could fit into the tight operating space.

FMC then went to miniROVs and outfitted one with a special torque tool that could attach and tighten each cap. Then, due to the North Sea's bad weather, FMC would use a work-class ROV to place the miniROV, which was to be in a basket, close to each manifold, and then release its tether. Thereafter, the larger ROV supported the miniROV to complete the task.

Navigating the first manifold was tight but straightforward. The miniROV operator reached the appropriate valve, used the torque tool to tighten the cap, and recovered the miniROV. The second and third manifolds were more difficult.

The second and third manifolds already had temporary test caps attached to their relevant valves, so, the miniROV had to remove and recover each cap before it could attach the permanent cap. On the second manifold, this was complicated by the fact that the WROV accidentally opened the miniROV's basket on the way up, but it was recovered quickly. By the third manifold, the operator attached a small mirror to the torque tool to see the test cap better, and, after recovering the miniROV and dropping it back down, he smoothly attached the final cap.

In another example, miniROVs proved suited in applications that require crawling and/or attachment, such as the 2009 case of an Inspectahire survey of an oil rig's legs in the Persian Gulf. Inspectahire was tasked with surveying the legs of an oil rig that belonged to one of the world's largest oil and gas exploration and production companies. As the rig experienced the Persian Gulf's thermally induced tides, previous attempts to survey the rig's legs by flying an observation-class ROV were unsuccessful.

After learning about crawling, adhering miniROVs, Inspectahire gave them a try. Due to their portability and tethering, not only did Inspectahire successfully complete the inspections, but was able to launch and direct the miniROV from the platform directly above each leg.

As Cailean Forrester, managing director at Inspectahire, said, "The LBC [Little Benthic Crawler] is an innovative piece of equipment, and in this instance allowed us to undertake a challenging survey in a safe and effective manner, and overcome some of the issues which had previously been faced. An alternative method would have been to use divers, but they would have had to use magnetic clamps to ensure they didn't get swept away in the current."

MiniROV manufacturers have overcome many of the challenges faced in deploying these smaller, more nimble ROVs in deeper offshore waters. In the process, they advanced capabilities with innovation.

Vortex generators, for example, now allow miniROVs to firmly attach to and crawl around structures, saving operators from having to employ diving teams for tasks like surveys. Similarly, low-drag tethering using Ethernet extension helps a miniROV maintain its maneuverability while offering the ability to be launched by hand.

As such, miniROVs have proven to deftly and portably complement the capabilities of larger, work-class ROVs. In certain applications, a miniROV may be the only ROV needed.