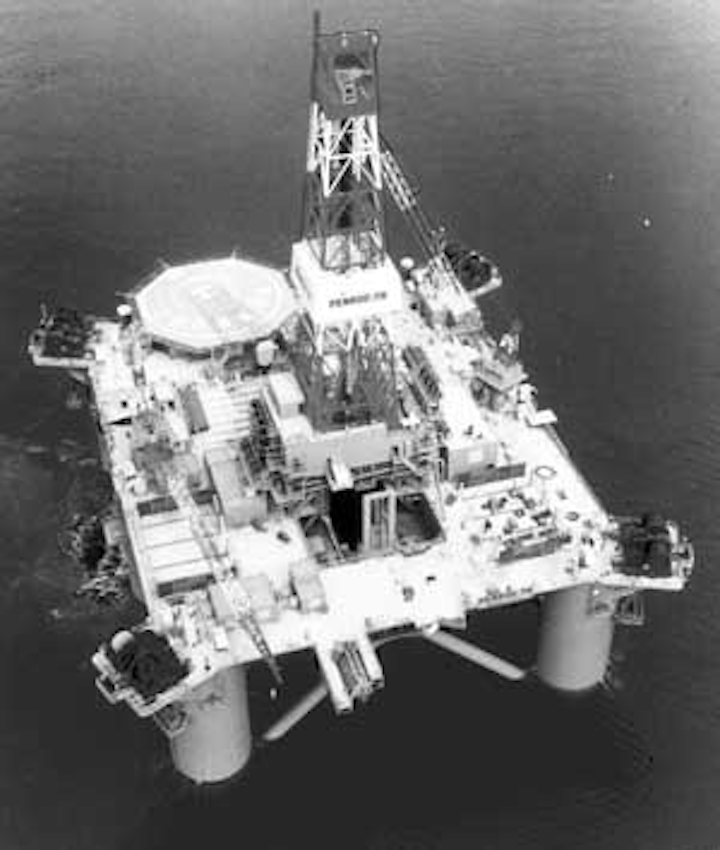 Offshore: From where you started, did you ever conceive the weights and the scales that you're working with?

Norton: No, because, in the beginning, we had, maybe, two 75-ton bridge cranes that handled the BOP stack. Of course, you handled them in two pieces, and, because they were tall (what we thought were tall back then), you had to assemble and test them on the well center before you ran them. And then, later on, in the early 1980s, a Norwegian company came up with a transporter that was like a giant forklift truck, which permitted the stack to remain assembled. This was an improvement because, every time you broke the joint between the BOP and lower marine riser package (LMRP), when you reassembled it, you had to retest it because you had to prove that the joint could hold the pressure rating in the stack. And you were able to lower the stack before you got under the drill floor, and this made running faster. Of course, they've grown now to where the handling equipment is rated at 500 tons – so we've gone roughly from 150 to 500 tons in the space of 45 years.

Offshore: Is there a ceiling to this?

Norton: I'm sure there is, but I wouldn't even want to venture to say what it is because, like I said, it has increased so much over the past 40 years. What's going to happen in the next 40? I'm sure they'll come up with something.

Offshore: Talk to us about risers and their role in these innovations.

Norton: The riser's purpose is to return the mud and the cuttings from the wellbore back to the surface, where the mud processing system will remove the cuttings and any gas that might be in the mud – and then the mud is reused because it's a very expensive commodity. The earlier risers were bare, and they depended strictly on the riser tensioner system to support the risers (because of the weight of the riser and the mud, the riser can't support itself). And you had top tension, which was not that much back then, but it was considerable. But as the risers got longer because of the deeper water, they had to get heavier because of the wall thickness due to the hydrostatic head on the bottom of the riser. Also, along came the buoyancy jacket, which was strapped to the individual riser joints, which, in conjunction with the top tension, made the longer strings feasible. As water depths increased, the wall thickness of the riser increased, and soon the weight became a factor and you didn't have sufficient top tension, you didn't have sufficient buoyancy. So, they came along with the tapered string, where, as the riser length increased, the lower sections had a heavier wall, and, as you went up the riser, the wall got thinner, and, coupled with the increased buoyancy jacket diameter, you were able to have a tensioner system that was reasonable.

If something happened and you lost the mud that was in the riser (either due to a lost circulation incident in the formation, or if the riser parted), then there was a riser fill-up valve that opened and allowed seawater to flood the riser, which reduced the chances of a riser collapsing. When you have all this buoyancy and all this tension, if something happens, like an unscheduled disconnect between the stack and the seabed or the stack and the LMRP (and with the massive amount of tension right now – it's up to 4,000 kps), you could drive the riser through the drill floor. They have a sensing system, called the anti-recoil system, which senses this minute increase in acceleration, and it shuts the riser tensioners down and prevents this from happening. The riser also supports the choke and kill lines from the stack to the rig. Also, there's hydraulic lines that keep the accumulators that control the BOP functions charged, and a few other lines on it.

Offshore: Talk about the introduction of dynamic positioning (DP) and how that has affected design and what you do.

Norton: As rigs moved into deeper water, the mooring system became less effective, and, because so much of the strength of the wire, or the chain system, was consumed by just supporting itself, it reached a point where we had to do something. Then came dynamic positioning. Now, they have several different categories of dynamic positioning: DP-2 and DP-3. Right now, the most common is the DP-3, which has the most onerous set of regulations, because it requires redundancy in all systems. You have separation of the power generation equipment, the switchgear equipment, the distribution system, and the thrusters. The rig has to be able to lose a whole engine room, or a whole switchgear room, or a whole thruster room. So, to maintain a "station" in a reasonable environmental situation, you have to have sufficient generation capacities to accomplish this. This means that more space is required for three and four engine rooms and switchgear rooms. It increases the size of the vessel just to accommodate all of this redundancy.