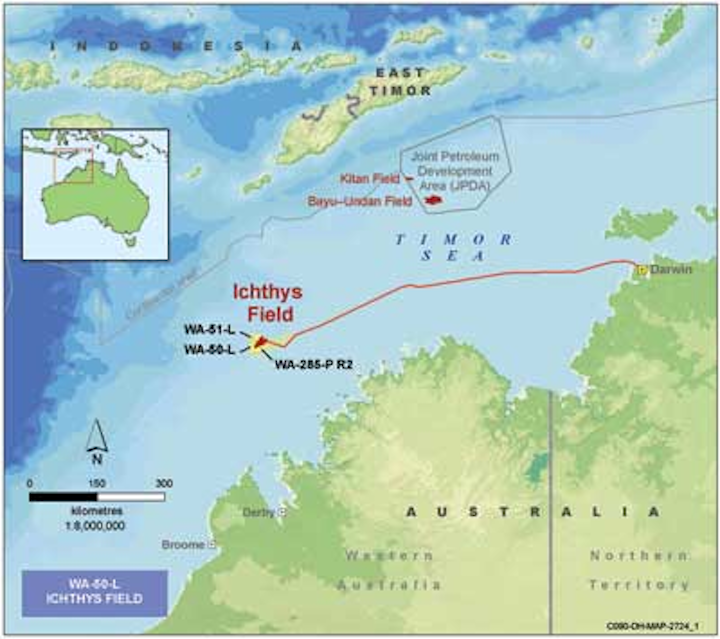 To date, all 889 km (552 mi) of the 42-in. pipeline has been produced and coated, and pipeline construction started mid-year. The Saipem pipelay vesselSemac-1 is installing around 120 km (74.5 mi) of pipe through Darwin Harbour and beyond before transferring it to a deepwater lay barge, Saipem's Castorone, which will take it all the way to the Ichthys field.

Throughout the year, 30,000 metric tons (33,069 tons) of equipment and 400 km (249 mi) of flexible and rigid lines will be installed on the seabed to gather and distribute the process fluids to the wells and the production liquids from them. Subsea structure fabrication and rigid pipeline assembly is well advanced in McDermott's and Heerema's yards in Batam. Flexible riser production is also in progress at various locations in Europe including the 110-m (360-ft) high, 7,000-metric ton (7,716-ton) riser support structure that will be installed by Heerema's deepwater construction vesselAegir.

The production drilling rigEnsco5006 is undergoing 175 days of extensive upgrades before being towed to the field to commence drilling the first production wells in October 2014. By 4Q 2014, the first topsides will be lifted on to the central processing platform (CPF) and FPSO hull, paving the way for modules integration and then commissioning.

The Ichthys reservoirs are located in the Timor Sea around 200 km (124 mi) off the Western Australian coast, more than 800 km (497 mi) southwest of Darwin. There are two geological horizons with a total of around 12 tcf of gas and 500 MMbbl of condensate. This makes it the largest discovery of hydrocarbon liquids in Australia in more than 40 years.

Once in production, most condensate will be transferred from the CPF to the nearby FPSO for offshore processing. The remainder will be sent to Darwin with the gas via the pipeline.

The huge FPSO – one of the largest and most sophisticated to be deployed worldwide – will be positioned about 3 km from the CPF to treat and export the condensate. The 336 m by 59 m (1,102 ft by 193.5 ft) hull has now been launched from the dry dock at the Daewoo Shipbuilding and Marine Engineering shipyard in Okpo, South Korea. Designed with a storage capacity of nearly 1.2 MMbbl, the FPSO will be a weather-vaning ship-shaped vessel that will be permanently moored on a non-disconnectable turret. The turret is one of the most complex pieces of equipment used on the project.

Some of the world's best known contractors are engaged for the project:

Jarrad Blinco is leading the pipeline team at INPEX: "We decided on using three mills to provide supply chain redundancy and schedule flexibility," he said. "We had 100% of their capacity for quite some time, but we sequenced the work to provide a steady, continuous supply of pipe to the coating yards."

The pipeline coating process starts with an internal flow coat application to enhance the flow performance characteristics of the gas stream, followed by an external anti-corrosion asphalt enamel coating. It is then coated externally with concrete of varying thicknesses to provide additional weight which helps pipeline dynamic stability on the seabed.

"Because it's such a long pipeline, the seabed is highly variable," Blinco commented. "The pipeline traverses sand, clays, silt and rocky outcrops, but one unexpected element was on the approach to the field, where we discovered a big escarpment about 30 m (98 ft) high. So today, if you look at the pipeline route you can see there's a big dogleg as we avoid this geohazard."

Blinco further explained that "while we could have engineered a solution to span the escarpment, we decided on a different route, providing a solution which satisfied the necessary robustness for operating a hydrocarbon pipeline for the full development life. It's an asset that needs to operate without any compromise for the 40-year life span of the Ichthys development. Also, the project is a first for Inpex as an operator, so we adopted a conservative approach."

The shallow-water lay barge is an anchored vessel which works outside of the cyclone season. "This mitigates risk associated with cyclone avoidance because of the slow response time typical of anchored vessels. She will have a 12-point anchored mooring system that she uses to navigate her way along the pipeline route," said Blinco. "The deepwater pipelay vessel is a newbuild and quite unique. She can actually pre-fabricate triple joints inside the vessel hold before transferring them into the firing line for final welding into the pipeline. It's a big ship-shaped vessel, with capacity for 700 people and as big as an aircraft carrier. It's extremely efficient with much of the process automated. Because she's so big, she can't work in shallow water, hence the other barge."

Pipeline construction in Darwin involves winching onshore at the landfall site via a 3-km shore-pull, employing buoyancy tanks, roller boxes, and a 600-metric ton (661-ton) linear winch. After roughly 120 km (75 mi) of pipelay with the shallow-water lay barge, the pipeline will be transferred to the deepwater pipelay vessel via industry standard abandonment and recovery procedures. The pipeline will then be laid all the way to the Ichthys field before terminating with the world's largest subsea driverless connector incorporated into a pipeline end termination assembly.

Ichthys LNG project director for offshore, Claude Cahuzac, says the CPF is designed to stay on site without dry dock for 40 years: "This is taken into account in our design specifications but also in the lay out of the hull where any part is accessible and can be inspected. All equipment on board has been specified for 40 years. Lay-out and topsides design as well as the redundancy of the equipment allows for maintenance and replacement without production shut down," he added.

"In the Northern Territory and offshore from the Kimberley region the number of cyclones and strength is well known," Cahuzac observed. "But here we face an additional challenge – we are in a zone of cyclone formation, which means we do not have much time to anticipate. Therefore the CPF is designed to 'survive' 10,000-year return conditions and to be operable in 200-year return conditions."

The cyclone season runs from November to April, and while wave heights are not extreme by North Sea standards, wind speed can be extreme. The size of the CPF and therefore the control of the weight is one of the main challenges that INPEX faces. A strict control of the weight has been implemented during the FEED. Optimization studies have been carried out which resulted in modification to the design, layout, and material specifications.

The size of the topsides, and its square shape, has an impact on ventilation and risk of blast. Quantitative risk assessments have been conducted during FEED resulting in modification to decks and column height to improve ventilation.

Production will come from 20 subsea wells in the first phase of the project, although 50 will be drilled in total. The 30 remaining wells from a further eight drill centers will be drilled at a later stage to maintain gas production as the two reservoirs are depleted over the life of the field. Wells will be drilled using directional drilling technology allowing for the clustering of wells and subsea facilities, and well centers have been designed to accommodate 4-6 wells. Drill depths for the first phase of 20 wells will be dependent on a number of factors, but well depths will range from approximately 4,200 m to 6,500 m (13,779 ft to 21,325 ft). The field lies in water depths ranging from 235 to 275 m (771 ft to 902 ft).

The project is underpinned by sales and purchase agreements that cover the total production volume of 8.4 MM metric tons a year (9.26 MM tons/yr) of LNG for 15 years with shipments scheduled to begin in 2017. Approximately 70% of the contracted Ichthys LNG will go to Japanese utilities; the remainder will go to Taiwanese markets.

When operational, the project is expected to produce 8.4 MM metric tons of LNG and 1.6 MM metric tons (1.76 MM tons) of LPG per annum, along with approximately 100,000 b/d of condensate at peak. Production is scheduled for the end of 2016.