Two words that encapsulate the Society of Exploration Geophysicists annual International Exposition and 84th Annual Meeting in Denver are "innovation" and "integration." Of all the technologies involved in upstream oil and gas, none is more subject to innovations than is the geophysics side. Much of the innovation touted at the event involved integration of systems and programs into packages designed to give a bigger and better understanding of the subsurface to a range of disciplines for an improved life-of-field span. There was also increasing interest in the environmental aspects of offshore exploration. 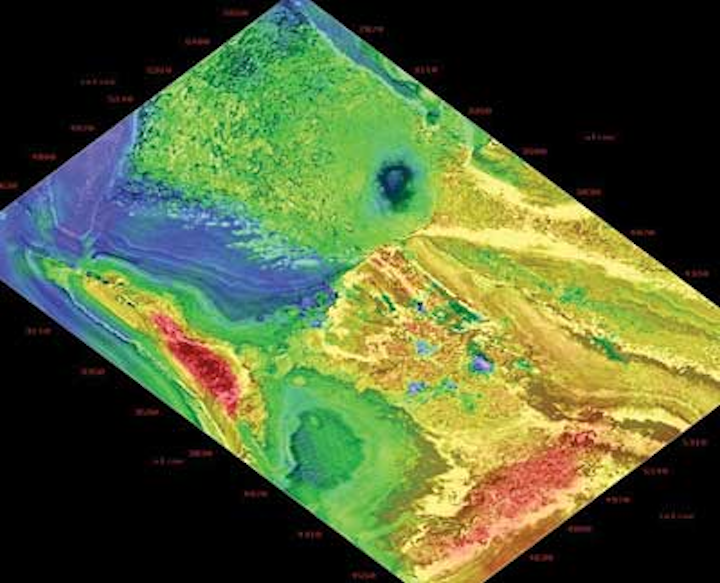 Two words that encapsulate the recent Society of Exploration Geophysicists annual International Exposition and 84th Annual Meeting in Denver are "innovation" and "integration." Of all the technologies involved in upstream oil and gas, none is more subject to innovations than is the geophysics side. Much of the innovation touted at the event involved integration of systems and programs into packages designed to give a bigger and better understanding of the subsurface to a range of disciplines for an improved life-of-field span. There was also increasing interest in the environmental aspects of offshore exploration.

The emphasis on integration is illustrated by the number of companies from large to small referencing the movement during the exposition. Following are some examples.

The application provides for geoscience interpretation across geological, geophysical, and engineering interests. For geoscientists, it delivers 3D analysis for fault interpretation and fracture identification, based on a new, patent-pending Illuminator technology. It also offers geosteering to help engineers minimize risk and optimize drilling productivity.

Other features within OpendTect 5.0 include integration with MATLAB for numerical computation, visualization, and programming; the application of post-stack attributes to pre-stack and multi-component datasets and the creation of multi-attribute outputs to pre-stack or multi-component volumes; access to texture attributes through links to dGB, Austrian-based research institute, Joanneum, and Austrian oil and gas company, OMV Aktiengesellschaft.

StructureSolver also has "one-click" structural restoration that can restore interpreted seismic or geologic sections by restoring slip across faults.

StructureSolver says the program seeks to create paleovertical trajectories in the present day seismic or geologic section that correspond to unbroken vertical traces in the restored section. A hybrid approach is used where length is conserved along the reference horizon, the internal parts of fault blocks are restored using vertical shear, and a constant amount of slip is removed along each fault, equal to the slip of the reference horizon across that fault.

Chevron USA was contracted to access an expanded Paradigm product portfolio. The new agreement adds formation evaluation as well as access to licenses for seismic processing and imaging, and drilling engineering to existing interpretation and modeling software. The companies say they also will collaborate on new workflows and functionalities that address specific needs of Chevron's asset teams.

"BP has an established track record of innovation and industry leadership in the area of seismic acquisition, which plays to our notable strengths in exploration and resource progression," said Eric Green, vice president, Advanced Seismic Imaging Technology, at BP. "This agreement highlights BP's ongoing commitment to remaining at the forefront of this important field. We welcome this exciting opportunity to cooperate on novel marine source technology with CGG."

New equipment and computing hardware was evident at the show, too.

Seabed Geosolutions showed its Manta seabed node, deployable from transition zone depths to 3,000 m (9,843 ft) water depth. The Manta is designed to improve geophysical illumination of dense source grid, and full-azimuth and long-offset surveys. Manta is an autonomous 4-C modular seabed node that is deployable in traditional receiver configurations or by ROV. The node is a four-component sensor with three geophones and a hydrophone. Seabed Geosolutions has used microcomponents and rechargeable batteries in a compact body that can be deployed and recovered robotically. Seabed Geosolutions is a joint venture of Fugro (60%) and CGG (40%) that was formalized in 2013.

Bolt Technology Corp. introduced its environmentally focused eSource bandwidth-controlled seismic source. Developed in conjunction with Schlumberger, eSource is designed to reduce the high-frequency ranges produced at the start of an air gun release that may affect marine life, but without reducing the lower frequency release that benefit seismic exploration. The purpose is to balance the seismic requirements with the burgeoning limits imposed by environmental regulations. The eSource hardware can be configured for three levels of operation depending upon the geological requirements of the survey and the regional regulations. The equipment works with existing arrays without changes and is compatible with typical handling arrangements, says Bolt.

As is usually the case, when more and bigger program packages are developed, the hardware suppliers respond with more capacity and methods of increasing computational speed.

A number of speakers addressed the broader issues during the meeting. Among them, Christof Stork of ION Geophysical discussed the decline of conventional seismic acquisition in favor of specialized techniques. Stork said acquisition outcomes improve as acquisition systems become more flexible and include the capacity to specialize. He expects this trend to accelerate because better processing allows for irregular and non-uniform acquisition; new processing tools benefit from specialized acquisition; and better risk management will help operators accept unconventional acquisition.

As to time-domain seismic imaging, Sergey Fomel of the University of Texas Jackson School of Geosciences talked about advances in velocity-independent, time-to-depth conversion, and wave-equation time migration, pointing at opportunities for technical improvements.

Least-squares migration (LSM) was Gerard Schuster's topic. Schuster, of KAUST, looked at how migration artifacts can degrade migration images and how these artifacts can be handled by linearly inverting seismic data for reflectivity distribution.

Kurt Marfurt said he foresees an increasing interactive computer/interpreter link to areas currently thought of as seismic processing. He also talked about increased application of cluster analysis and statistical correlation to completion processes and production data.

Allen Gilmer, CEO of Drillinginfo Inc., addressed big data and the potential impact it can have on oil and gas analytics. He showed how analytics and big data are used successfully in other industries such as Netflix, the insurance industry, and Google Analytics.

"Digital seismology is the granddaddy of big-data analytics. You have to do a lot of work to get something out of the data," said Gilmer.

This year's event introduced a new award, the Outstanding Educator Award. The inaugural recipient is Dr. Susan Webb, senior lecturer at the University of the Witswatersrand in South Africa. She was selected for her contributions in teaching geophysics classes, her impact on education programs through her commitment to excellence in geophysics education, her special dedication to advising, supervising, and mentoring students, and the inspiration she provides to the next generation of geophysics professionals.

The Kauffman Gold Medal for an outstanding contribution to the advancement of the science of geophysical exploration during the previous five years went to Dr. Peter Duncan for advances in passive monitoring and microseismic, through his company Microseismic Inc.

The Maurice Ewing Medal is given to someone "deserving of special recognition through having made major contributions to the advancement of the science and profession of exploration geophysics." This award is not awarded every year.

Dr. Norman Bleistein, a mathematician formerly of the Colorado School of Mines, is the recipient.