Petrobras started production from the Papa-Terra field on Nov. 11, 2013. Papa-Terra is a heavy-oil field in block BC-20 of the Campos basin offshore Brazil in 1,190 m (3,903 ft) of water. Development consists of an FPSO, the first tension leg wellhead platform in Brazil, and a tender assisted drilling unit. 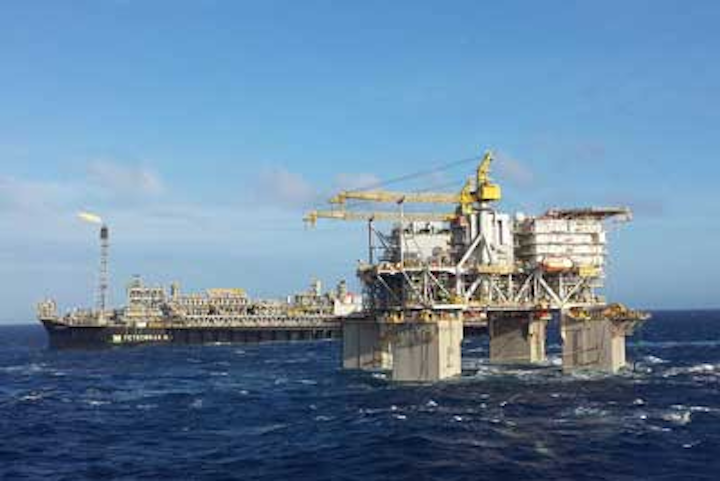 Discovered in 2003, Papa-Terra's reservoirs contain 14-17° API crude. In January 2010, Petrobras and Chevron sanctioned the $5.2-billion project that is estimated to recover 380 MMbbl of heavy oil. Development consists of an FPSO, the first tension leg wellhead platform (TLWP) in Brazil, and a tender assisted drilling unit.

The vessel will connect to five producer wells and 11 injector wells using 27 km (17 mi) of integrated production bundles (IPB) of risers and flowlines from Technip. The IPB technological solution increases the temperature of produced fluid after long shutdowns in order to reduce viscosity and enable well production restart.

In April 2012, InterMoor installed 15 drilling and production conductors for the FPSO. Fabricated at its 24-acre facility in Morgan City, Louisiana, the conductors are 36 in. (91 cm) in diameter and 187 ft (57 m) long. The company chartered theSkandi Skolten, DOF Subsea's construction anchor handling vessel, and the installation barge with a custom conductor launch system. For conductor driving, InterMoor used MENCK's MHU-270T DWS, which included a deepwater hydraulic hammer, at a water depth of 3,281 ft (1,000 m) combined with MENCK's girdle-type electro-hydraulic power pack and umbilical support system. Generating hydraulic power at depth, rather than at the surface, means no hydraulic hose.

Cathelco supplied an impressed current cathodic protection (ICCP) system to protect the underwater surface of the hull against corrosion. The ICCP incorporates four power units positioned throughout the length of the vessel.

The month before, McDermott International completed the installation of theP-61 TLWP at the Papa-Terra field. The platform, moored in 3,871 ft (1,180 m) of water, is South America's first TLWP installation and the first use of dry tree floating technology offshore Brazil.

The TLWP resembles a semisubmersible, but is moored to the seafloor by vertical anchors. The arrangement is designed to suppress the platform's range of motions, allowing the use of dry christmas trees on the deck of the platform. The project drew upon the proprietary technology, engineering, and construction resources of McDermott, Keppel, and FloaTEC, the joint venture company between McDermott and Keppel.

McDermott conducted topsides engineering in Houston. The piles and tendons were fabricated at the company's multi-joint welding facility in Morgan City, Louisiana, and at the McDermott Wuchuan fabrication yard in Qingdao, China. It used the deepwater construction vesselDerrick Barge 50 to install the eight piles and tendons.

Keppel FELS built the topsides at its Singapore yard and built the hull at its BrasFELS yard in Angra dos Reis, Brazil, where FloaTEC performed the topsides and hull integration using the float-over method.

Anchored alongside the TLWP will be theSS-88 tender assisted drilling semisubmersible platform. Built by Dalian Shipbuilding Industry Co. in China and by Superior Derrick Services in the US, the SS-88 will provide drilling and well completion services. P-61will connect to 13 production wells. All 18 Papa-Terra producer wells will be equipped with submersible centrifugal pumps. Output from P-61 will be transferred through multi-phase flow to the FPSO P-63. First oil is expected from P-61 TLWP by the end of the year.