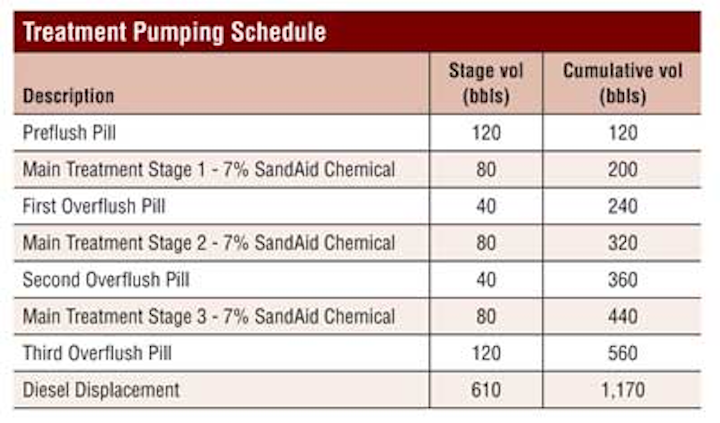 The well in question was a dual-zone intelligent completion and its selectivity feature enabled the operator to identify the fact that the upper zone was producing sand while the lower one was sand free.

The well had been a high producer since February 2009 and had a gross flow rate of approximately 1,450 b/d, with 50% BS&W and a GOR of 750 cf/bbl. Both zones were completed with a frac pack for sand control, but the upper one failed and needed remediation to allow continued production. By manipulating the zonal flow control valves, it was possible to direct flow via the flowline to the damaged upper zone, facilitating the pumping of treatment from the FPSO, using in place pumping equipment, while isolating the sand-free lower zone.

To assess the suitability of ZPAS, chemical lab tests were performed with formation cores and sand fines to verify that the treatment squeezed into the formation would not cause any formation damage. Based on these tests, the operator decided to proceed with a ZPAS treatment, and detailed plans for the performance of it were drawn in cooperation with the service company. The base fluid choice for ZPAS placement was sea water which was easily available from the FPSO facilities and, since it was being used for water injection, had proven reservoir compatibility. The sea water was filtered until turbidity dropped below 20 NTU, and a dispersant was added to enhance the ZPAS chemical distribution at the relatively cold seabed temperature.

Most ZPAS treatments use maximum pressure differential diversion techniques, where pump rates are maintained sufficiently high to allow fluids to enter all producing zones being treated. A step rate test is an important part of the pre-job evaluation to optimize the rate required for effective placement. The test is to identify the maximum allowable pumping rate, considering a threshold injection pressure up to 90% of formation fracture pressure. An injection (step-rate) test was performed and the recorded rates and pressures suggested a maximum rate of 15 bbl/min.

A major consideration in job planning was the possibility of hydrate formation in the 4.2-km (2.6-mi) long flowline with a volume of 100 cu m (3,531 cu ft) in the 5°C environment. To counteract this, methanol injection was used and the transient time between production shutdown and treatment was kept to a minimum.

The treatment schedule was determined based on design considerations. The pre-flush and over-flush pills were filtered sea water with a dispersant chemical. The pre-flush and third over-flush were of a larger volume to minimize mixing with any produced hydrocarbons in the flowline. The final displacement was done with diesel to minimize water in the flow line at completion of pumping. A total of 1,170 bbls of fluids was pumped at up to 15 bbl/min, the maximum rate established. 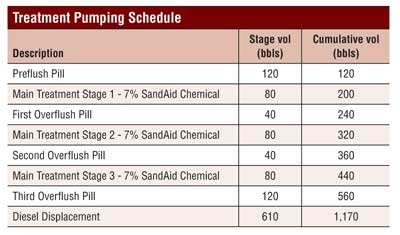 On the FPSO, sand monitoring was done with the support of acoustic clamp-on sensors which, after factory calibration with field-representative sand, were placed on FPSO piping upstream of the production choke. Acoustic sensor feedback can be considered qualitatively reliable where a quantitative measurement of daily sand production was not feasible. Based on the acoustic sensor, post-treatment sand production has been consistently reduced and, after more than two months of production, the well was sand free.

This was the first such treatment performed on a subsea well via the flowline and proved to be successful due to the pre-planning. The cost of the operation was minimal compared to the cost of a workover or the use of an additional vessel for pumping. The ZPAS treatment successfully repaired the existing frac pack and proved to be a viable alternative to conventional failed sand control remedial methods, and was found to be effective in minimizing fines migration as well. The Productivity Index remaining stable during post-treatment production, showing no impairment due to proppant or screens plugging.