The Research Partnership to Secure Energy for America (RPSEA), operating under the direction of DOE's National Energy Technology Laboratory, is working with GE to develop subsea processing technology to lessen the need for deepwater surface production facilities and extended tiebacks. 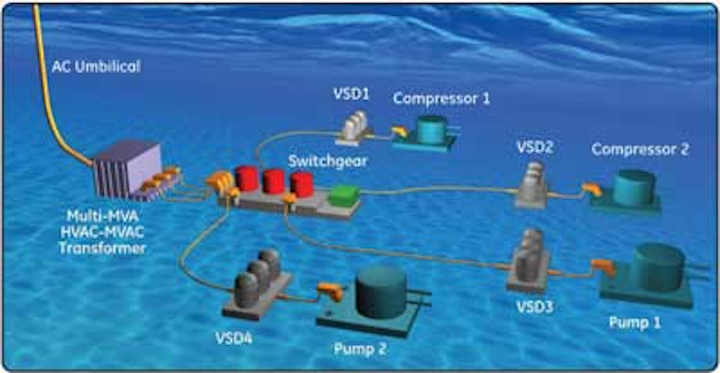 Multiple load applications. When multiple independent loads need to be supplied at a relatively long step out distance, the cost of power umbilical becomes a limiting factor if topside VFDs are used. One technical option to deliver power to subsea loads was pursued for the Ormen Lange field development, where the tieback distance is about 125 km and power requirement for the subsea loads is approximately 60 MW.

However, due to cable capacitance, in addition to the active power required by the loads, a large amount of reactive power needs to be supplied, leading to large and expensive cables with high current rating and losses. This also leads to more expensive umbilicals with higher costs of installation and retrieval. This issue is especially severe for longer step out distances. For example, to supply approximately 60 MW of active power loads on the seabed with 125 km step out, it is necessary to provide 70 MVAr reactive power and 2 MW power loss under no load conditions, and 50 MVAr reactive power and 4 MW power loss under full load conditions. The transmission distance of the conventional HVAC technology is, therefore, limited to about 90 miles for a given cable, with inductive compensation. The transmission distance of the AC solution can be extended by reducing the AC frequency.

A better way to overcome cable capacitance and reactive power issues for long distance power T&D is to use direct current (DC) instead of AC. HVDC is an established technology for onshore applications. The present voltage-source converter based HVDC technology (HVDC PLUS, HVDC Light), achieves high DC voltages by connecting a large number (e.g., up to 300 per converter) of specially designed and packaged power semiconductor switches or large number power modules in series. However, the acceptance of HVDC systems with respect to efficiency, reliability, and controllability will strongly depend on the availability of HVDC circuit breakers (CBs), making them one of the key enabling technologies. The difficulties in utilizing HVDC CBs can be attributed to the demanding requirements on the CBs in DC systems, which are quite different due to the absence of natural current zero crossings. The breakers have to fulfill the basic requirements of creating a current zero crossing to interrupt the current and dissipate the energy stored in the system inductance. Therefore, the converter substations are bulky with limited flexibility; they are also complex to transport, marinize, install and retrieve, reducing the system flexibility for future field expansion. Even if these modern HVDC systems are marinized, assuming scenarios where loads are to be located 10 km from each other, they will require a subsea transformer which will supply subsea switchgear and a set of 10 km three-phase subsea cables to connect to each subsea VFD with an input transformer. All these components will, therefore, increase the system complexity, number of subsea components, and distribution losses.

An example of modern HVDC application is the Troll A offshore platform. It has a tieback distance of about 70 km and a water depth of about 300 m. The receiving end inverter station is a voltage source converter based HVDC with a rating of about 88 MW. The receiving end inverter is not subsea; it is installed on the platform. However, for longer tiebacks and deeper waters where a platform cannot be built, the HVDC converter station, as used in Troll A, becomes challenging to transport, install and retrieve on the seafloor due to its physical dimensions and weight. Moreover, any failure on the receiving end unit will have an impact on the overall field production. The Troll converter station caters to a single load (HV motor) and is not directly scalable for connection to multiple loads; hence it has reduced flexibility for future field expansion.

In order to overcome the issues related to conventional AC and present DC transmission systems for long-distance subsea tiebacks, a set of modular stacked DC (MSDC) architectures was explored. In contrast to conventional HVDC, the MSDC technology achieves the required DC transmission voltage by stacking a number of power converter building blocks in series, both on the sending end and at the receiving end of a DC bipolar cable. From the sending end, the system is controlled to behave as a current source system. In terms of protecting the system, this creates a substantial advantage compared to the HVDC system which is controlled to behave as a voltage source. The protection is not realized by breaking the current operation; instead the faulty module is bypassed which makes the protection much smaller and easier to accomplish. On the other end, each subsea module acts as receiving end power converter and integrated VFD system. Since each building block is similar to a conventional drive, the subsea VFDs are smaller and easier to transport, marinize, and retrieve.

Moreover, the modularity of the MSDC architecture renders the system fault-tolerant and capable of operating in a degraded mode. The architecture is also highly reconfigurable as the field matures and the loads evolve over time.

Compared to AC technology, it is apparent that the number of subsea components is vastly reduced (no distribution transformer, and no switchgear), potentially reducing the cost and improving system reliability and availability.