The Cook Inlet is not "offshore" in the open waters of the ocean; nor is it above the Arctic Circle, which is some 500 mi (805 km) to the north. 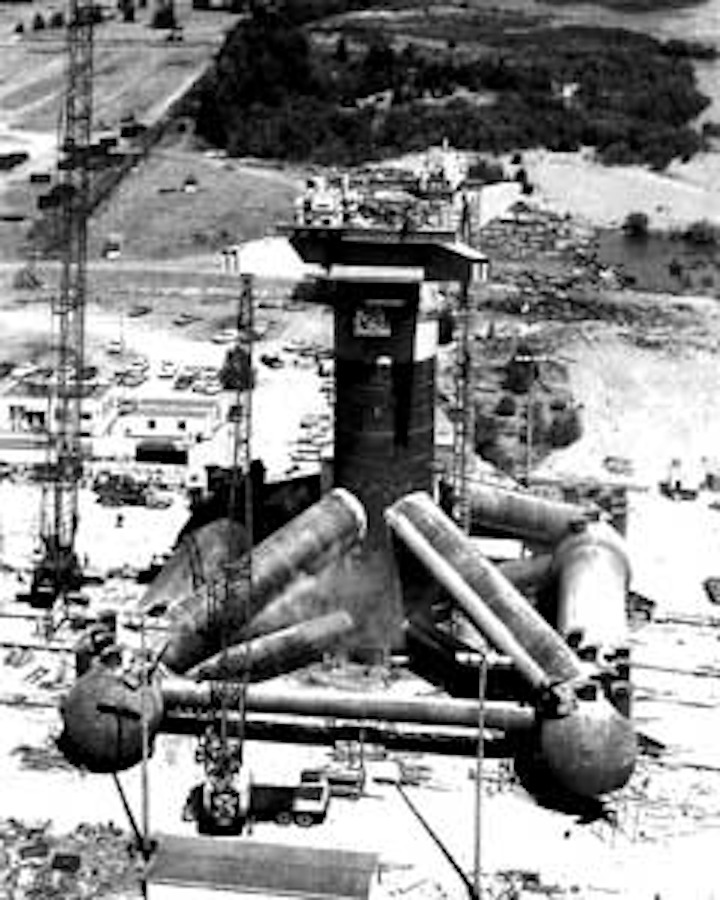 As knowledge of Arctic ice grew, four basic approaches for drilling and production emerged. Gravel islands proved effective in shallow water. As with everything in the remote regions above the Arctic Circle, however, equipment and material to construct these islands were expensive. For deeper water, ice islands could be constructed by using powerful nozzles to spray water high up into the frigid air to create giant blocks of ice capable of supporting drilling activity for several months.

Gradually, large drillships with reinforced hulls came into use in deeper water. They had the mobility and strength to extend the drilling season, which was no small matter when the window for work might be as short as three to four months a year. After early exploratory drilling suggested that oil and gas would be found, designers tackled the even more demanding job of creating production platforms capable of year-around operations. Equipment placed on the ocean floor under the ice made this possible. Trial and error with new technologies suited for the Arctic gradually produced greater understanding of what could go wrong, but the price of knowledge was high.

Permafrost, ground permanently frozen from long exposure to intense cold, presented demanding new problems in the Arctic. On land, protection of permafrost demanded new construction techniques, notably the building of long segments of the Trans-Alaska Pipeline (TAPS) above ground to avoid damaging the permafrost, which could have been thawed by hot oil flowing through an underground pipeline.

Offshore, different problems had to be solved with what came to be called "relic permafrost," that is, once frozen ground gradually being thawed by warmer temperatures near the ocean floor. The degradation of relic permafrost was hastened by the heat generated by drilling operations and by the circulation of warm drilling mud. Under certain conditions, this caused the walls of the drill hole to disintegrate and collapse. This problem could be lessened through the use of "permafrost cement" developed at Prudhoe Bay to anchor steel casings to the walls of the drilled hole. Refrigeration to cool drilling mud also helped slow the degradation of relic permafrost. Another innovation that improved drilling in this environment was the introduction of "Big Bits" as large as 25 ft (7.6 m) in diameter.

Costs were high in every aspect of Arctic operations. High wages and the need for enclosed work spaces raised labor costs. The transport of supplies and equipment from distant locations and delays from abrupt changes in the weather and from regulatory constraints raised operational costs. Given the expense of new technologies to combat ice, this was a very expensive new frontier. Companies needed oil prices to stay high over decades to justify the billions of dollars of investments needed to develop commercial supplies of arctic oil.

The harsh conditions in this remote region raised two problems of particular concern to planners and investors. The first was the cost of transporting oil or gas from the region to distant markets. The construction of TAPS in the 1970s confirmed that the financial and environmental costs of moving oil and gas from the North Slope to markets would be quite high. Despite a cost of about $8 billion, TAPS could be justified by the fact that Prudhoe Bay had 10-14 Bbbl of recoverable oil reserves, making it the largest oil field ever discovered in the United States. Only very large fields could justify such investments.

The opening of TAPS in 1977 gave those searching for oil offshore northern Alaska and Canada one option for transporting the oil they hoped to produce. Depending on where they discovered oil, however, these companies might be forced to build their own expensive and technically challenging pipelines to connect with TAPS. If they could not gain access to TAPS, they had few alternative means of transport. Proposed ideas included moving oil to market under the ice in a fleet of nuclear-powered submarine tankers, using very long unit trains with tanker cars, and using oil tankers with reinforced hulls to move through a new Northwest Passage kept open with giant icebreakers. All of these options had been discussed and dismissed as impractical or uneconomic before the building of TAPS.

An even more difficult reality faced those who discovered natural gas fields in the Arctic. An estimated 35 tcf (1 tcm) of associated natural gas deposits found at Prudhoe Bay in the 1970s remain there today. Proposals to construct gas pipelines from the North Slope through southern Canada into the US sprung up when natural gas prices rose, with price tags ranging from $30 billion to $65 billion. Yet no gas pipeline has been built. High costs combined with fluctuating prices for natural gas have undermined these ventures. The very high costs of transport facilities from the Arctic makes the break-even point for the "commercial production" of Arctic natural gas even higher than that of oil.

Now, as in the late 20th century, environmental protection remains the second great uncertainty facing Arctic exploration and production. We know that oil in water is not the same as oil in ice. But more information is needed on how to attack the problems presented by a major oil spill in ice-filled waters. More basic infrastructure to respond to oil spills is still needed to bridge the long distances from the location of onshore response facilities to spills or accidents in remote undeveloped sections of the Arctic. TheExxon Valdez oil spill in 1989 took place in the less fragile, less ice-filled waters of southern Alaska, yet the cleanup was difficult and significant damage occurred. Spills in remote sections of the Arctic could be orders of magnitude more difficult to address than those in warmer waters.

Such issues moved to the background after 1977, when TAPS began shipping oil and oil production offshore began in Canada's Beaufort Sea. In the next five years, a variety of factors encouraged the onset of an Arctic oil boom. The price of oil remained at what were then historic highs from 1978 to 1983; surely, a new era of high and rising oil prices had arrived. Exuberance for developing Alaskan oil grew particularly high, since domestic reserves might reduce imports of OPEC oil. In the context of the time, this was not necessarily "irrational exuberance," at least as long as oil prices remained high.

This Arctic boom and bust of the 1980s followed patterns from previous oil booms. As the oil industry searched for new reserves of non-OPEC oil, Alaska loomed large. Business and government spokesmen oversold the Arctic's potential production and downplayed potential difficulties. A National Petroleum Council report in 1981 estimated that Alaska had perhaps 45 Bbbl of undiscovered oil. The report included a letter from the Secretary of Energy stating that "the Alaskan province and Arctic area Outer continental shelf appear to be the frontier regions with the highest potential for significant oil and gas resource development." A high level Exxon executive added, "The Arctic is the future of the oil industry." John Swearingen, the CEO of Amoco, proclaimed that "the Gulf of Alaska will make the North Sea look like a kiddie pool." In such an atmosphere, the herd instinct common during booms kicked in, and the industry jumped into Alaska with both feet.