Green initiatives aimed at building dual-fuel fleets and using LNG propulsion technology are providing the framework and best practices for gas-fueled vessels operating in US waters. In 2011, Harvey Gulf International Marine LLC decided to build a new generation of Jones Act-compliant offshore support vessels that have the capacity to burn both diesel and LNG as fuel to service the US GoM offshore market. These OSVs are the first LNG-powered vessels to be built in a US shipyard under the auspices of the US Coast Guard and classification society ABS. 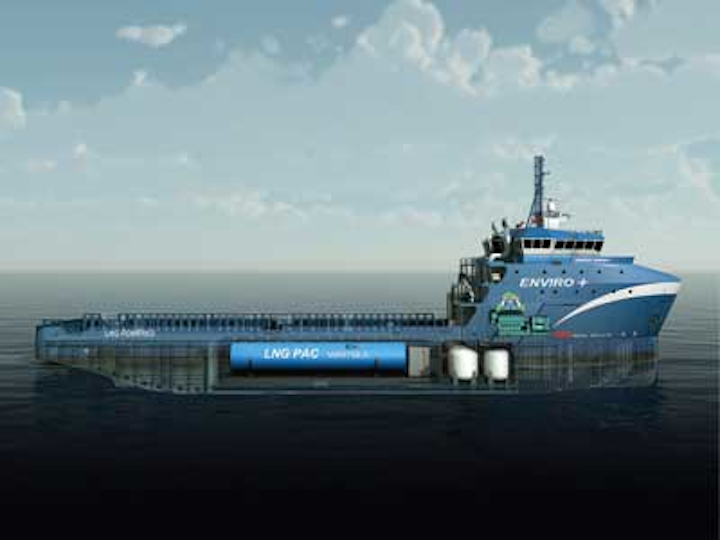 New regulations will soon require vessels operating within the North American Emission Control Area (ECA) of 200 nautical miles of the US, Canada, Puerto Rico, and the Virgin Islands to meet a 0.1% fuel sulfur emissions content limit. With Jan. 1, 2016, set to ring in the world's strictest emissions content standard, vessel owners operating in these areas must identify solutions to lower emissions or face the consequences of noncompliance. This includes owners of offshore support vessels (OSVs) in the Gulf of Mexico (GoM).

Options for meeting compliance include using ECA-compliant blends of ultra-low sulfur fuel, using exhaust gas scrubber systems to remove pollutants from the emission stream, or switching to an alternative marine fuel such as LNG. While all of these solutions are effective to some degree in reducing NOx, particulate matter, and SOx discharges, using LNG as fuel shows the most promise as a "best available technology" with long-term economic and environmental benefits. US regulators, classification societies, and early movers in industry are all onboard in the first wave of LNG-as-fuel initiatives under the US flag.

"Going green" in the GoM

Green initiatives aimed at building dual-fuel fleets and using LNG propulsion technology are providing the framework and best practices for gas-fueled vessels operating in US waters. In 2011, Harvey Gulf International Marine LLC decided to build a new generation of Jones Act-compliant OSVs that have the capacity to burn both diesel and LNG as fuel to service the US GoM offshore market. These OSVs are the first LNG-powered vessels to be built in a US shipyard under the auspices of the US Coast Guard (USCG) and classification society ABS.

In addition to the work involved in vessel design, the project scope for the first six dual-fuel OSVs required developing regulations and processes to address the technical challenges related to their design, construction, fueling, and operational capabilities.

It is important to recognize that LNG propulsion technology is not new. Finland's Wärtsilä developed the concept and implemented it 11 years ago on a platform supply vessel (PSV) working for Statoil in the North Sea. The PSV has since benefitted from hundreds of thousands of hours of sea experience accumulated from several hundred dual-fuel engines operating in ocean trades onboard LNG carriers. Dual-fuel diesel electric propulsion also has been the technology of choice for LNG carriers for 10 years, with 81 of these carriers in operation (23 under ABS class) and 102 on order, of which 33 will be under ABS class. Nearly three-quarters of LNG carriers on order today will be built with dual-fuel capabilities. In the GoM, however, the application of dual-fueled LNG-powered propulsion on OSVs will be a step change in energy economics and efficiency that can improve environmental stewardship, and reduce fuel costs and consumption over the lifetime of a vessel.

At the time Harvey Gulf made its decision, there were no US regulations in place for vessel owners and operators to understand and evaluate the risks associated with using LNG as fuel. Classification societies assist regulators and industry with addressing operational safety and performance issues that may arise when existing technologies are used in new applications. ABS brought its experience with dual-fuel propulsion LNG carriers and 50 years of experience in the safe and efficient use of LNG. With input from industry and US regulators, the class society developed guidelines and technical standards for the arrangement, construction, installation, and operation of machinery components and systems for these first LNG-capable vessels.

Because US regulations were not yet in place, Harvey Gulf and designer Vard Marine submitted a proposal to the USCG that would help the federal agency establish an equivalent level of safety comparable to that which is required for traditional OSVs found in the published regulations of 46 CFR Subchapters I and L. In determining a baseline for developing design criteria, the companies turned to the published standards applicable to gas-fueled vessels, namely the International Maritime Organization (IMO) Resolution MSC.285 (86), or the "Interim Guidelines on the Safety for Natural Gas-Fuelled Engine Installations in Ships" (Interim Guidelines), and the ABS Guide for Propulsion and Auxiliary Systems for Gas Fueled Ships (ABS GFS Guide). After receiving the formal request to use the above standards as a design basis, supported by specific arrangement plans, the USCG accepted the proposal and provided a design basis letter outlining the requirements to establish an equivalent level of safety.

The USCG has since established a formal policy letter currently applicable to gas-fueled vessels – the CG-521 Policy Letter No. 01-12, dated April 19, 2012, and titled, "Equivalency Determination – Design Criteria for Natural Gas Fuel Systems" (USCG Policy Letter). As such, the regulatory framework was set for a US-flagged LNG-fueled vessel.

The LNG OSV design was developed in accordance with the Interim Guidelines, USCG Policy Letter, and ABS requirements for gas-fueled vessels. ABS and the USCG worked closely with the owner, designer, and equipment manufacturers to promote safety and consistency and to address the technical challenges related to the concept designs, including the location of fuel tanks, space limitations, double-walled stainless steel piping, and cryogenic materials.

The project is enrolled in the USCG Alternate Compliance Program (ACP). The ACP is a process through which "recognized organizations" such as ABS are authorized by the USCG to conduct almost all plan review and surveys on behalf of the USCG. The vessels being evaluated must comply with the class rules, all applicable IMO regulations (e.g., SOLAS, MARPOL, etc.), and an additional list of USCG specific supplemental requirements. The USCG conducts oversight and inspections at its discretion and remains responsible for issuing the final USCG Certificate of Inspection. However, since the requirements for gas-fueled ships are not published in the USCG regulations and because the IMO International Code of Safety for Ships Using Gases or Other Low Flashpoint Fuels (IGF Code) is still under development, the USCG has retained all plan review and inspection responsibilities for LNG fuel gas systems and equipment.

Together, the vessel owner and designer chose a proven diesel-electric OSV design as the foundation for their program. The design called for a 302-ft (92-m) PSV with a total installed horsepower of more than 7,500 kW. The project was simplified by using a parent vessel design. This allowed the vessel owner, designer, USCG, and ABS to focus only on the gaps and technical challenges, such as addressing hazardous areas and best practices for LNG tank venting arrangements.

While ABS did not review or approve the LNG systems on behalf of the flag state (USCG) for this project, it played a role in facilitating the process of approval and reviewed the systems for compliance with its own class requirements. Based on the ABS GFS Guide and feedback from the designer and equipment suppliers, the class society established a document register needed to support the fuel gas system plan review. The document register was annotated to indicate the specific plans that were required for information, review, and approval by the class society and the plans that require an independent review and approval by the USCG Marine Safety Center.

The class society also provided a series of technical training programs aimed to enhance the understanding of the design, operational, and regulatory aspects of using LNG as a fuel. Surveyors experienced with LNG systems were brought in to support the installation, testing, and commissioning of the LNG fuel gas systems.

Harvey Gulf's LNG-fueled OSV fleet also is being built to the specifications of the ENVIRO+ and Green Passport (GP) notations under ABS classification. To comply with the ABS certification requirements, vessels must be entirely constructed with certified environmentally friendly materials and, among other specifications, be outfitted with advanced alarms for fuel tanks and containment systems. A certified environmental officer must man the vessel at all times.

Early adopters of environmentally friendly gas-fueled designs will be well prepared to comply with increasing emissions restrictions and will have the added benefit of achieving greater efficiency.

A fueling facility for LNG-powered OSVs

To widen LNG availability to the domestic offshore market, Harvey Gulf announced plans in February 2014 to construct the first LNG marine fueling facility in the US in Port Fourchon, Louisiana. The fueling facility is a critical first step to growing national LNG supply infrastructure and supporting OSVs powered by LNG.

The Port Fourchon LNG facility will consist of two sites each with 270,000 gal of LNG storage capacity. The tanks will be stainless steel Type C pressure vessels with vacuum insulation and carbon steel exteriors. Each facility will be able to transfer 500 gal/min.

The company will be the first US vessel owner and the first US bunkering facility operator to conduct LNG fuel transfers. With support at all levels from the USCG and class assistance in reviewing crew training procedures, the company's bunkering procedures and crew training requirements are under development. Harvey Gulf has requested guidance, input, and support from worldwide leaders in the LNG industry.

In early 2014, ABS and affiliated company ABS Group conducted a study to address specific issues associated with LNG bunkering as well as the infrastructure at ports and marine accessible terminals. The final report, "Bunkering of Liquefied Natural Gas-fueled Marine Vessels in North America," lays out a comprehensive road map to guide stakeholders in navigating LNG bunkering issues and the emerging technological and regulatory implications of using LNG as fuel.