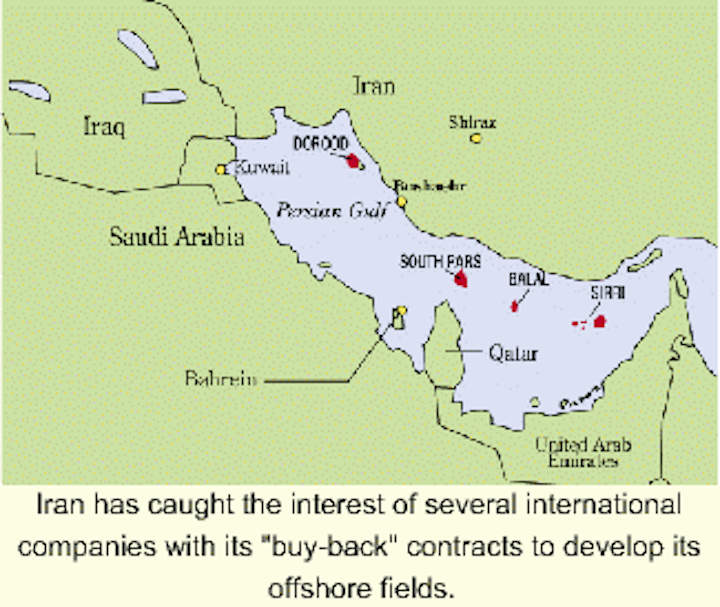 The absolute power of the Middle East in terms of global oil supply and production capacity has remained unyielding over the past year. The region and its countries have reminded the non-OPEC producers and consumers it is indeed the most oil-rich province in the world and still has the clout to demand recognition.

As if making this point, several of the region's countries have begun once again opening their doors to foreign investment, and still others are considering the option. This has resulted in an a mad rush of investment in the region, despite the current industry climate and the warnings of some governments.

This interest in international investment has been good news for the Arab countries. The investment has helped to give their oil-based economies a necessary lift following a period of low prices.

The most notable of these has been Iran. In 1995, Iran tendered an $8 billion program to attract foreign investment. The program, called "buyback", offers foreign firms crude oil as compensation in development projects within the country without equity stakes. The first deal of this kind was signed in 1998 for $2 billion with a group comprising TotalFina of France, Russia's Gazprom, and Petronas of Malaysia. The agreement covered the first three phases of the giant South Pars gas field. Production from the first three phases is planned to yield 1 bcf/d of gas and 40,000 b/d of condensate.

The first phase of the project is being handled by Petronas and is reportedly 20% behind schedule, with first production beginning in March of 2002. Phases two and three are being developed by all three members of the group and are also reportedly running behind schedule, but not significantly. Anticipated startup is scheduled for the second half of next year. Iran additionally is planning to reach buyback agreements with international companies for South Pars Phases 4, 5, 6, 7, and 8 this month.

Elf and Agip also got into the game and signed a $1 billion contract for the redevelopment of the Doroud oilfield. Elf holds a 55% interest in the contract and Agip takes the remaining 45%. Under the contract the companies will increase the fields recoverable reserves by 900 million bbl to 1.5 billion through gas reinjection. Elf also signed on with Bow Valley Energy of Canada for a $200 million deal for the Balal Field one month later.

Shell got into the act by signing an $800 million deal for two offshore fields - Sorouch and Nowruz. Shell will raise output for the Soroush Field from 60,000 b/d to 100,000-150,000 b/d, and renovate and expand onshore and offshore facilities for the Nowruz Field to increase capacity to 90,000 b/d.

Still more deals are in the works to boost the nation's output. These deals, while seen as extremely favorable for the oil industry, have not received much praise from some of the world's governments, particularly the US. The US has condemned the companies and said they have gone against government sanctions. However, the oil companies contend they have done nothing wrong, as most are European-based, and are continuing work without a hitch.

After seeing the attraction that Iran posed to the industry other countries such as Libya were hot to attract the international world as well. In 1996, the government established a committee to review the nation's petroleum law citing the need to reconsider legislation in order to bring it up to date with developments in the international petroleum industry. This follows the United Nations suspension of the seven-year sanctions that were in place against Libya.

Since that time, a new law has been developed and final approval is expected later this year. As part of this, the National Oil Corporation (NOC) of Libya has said that it plans to re-open some blocks in the Sirte Basin, as well as some other areas where current agreements are coming to an end.

In addition, the NOC plans to move ahead with opening some of its acreage. This will include 16 blocks with an onshore acreage of 26,000 sq km and an offshore area of 4,000 sq km, and negotiating exploration and production sharing agreements, and open another 24 blocks covering some 47,000 sq km onshore area and 14,000 sq km offshore area at a later date.

Other countries such as Iraq and Kuwait have also been doing their part to attract foreign firms and have been relatively successful. But all eyes still remained on the king of the oil producing world - Saudi Arabia - to break the news that it was opening its doors to foreign partners.

However, at the beginning of this year, a Royal Edict was passed which established a Supreme Council for Petroleum and Mineral Affairs for the kingdom. This council was granted supreme control over the nations oil and gas industry and its policies. Under the new Supreme Council, the state oil company, Saudi Aramco, was granted the exclusive role in the upstream oil and gas industry ruling out any possibility of foreign investment in the kingdoms upstream sector.

But beyond foreign investment, the area is beginning to gain some notoriety for its deepwater. Israel and Egypt have each posted significant deepwater discoveries in the past year.

In Egypt, BG has been spearheading the deepwater operations (see separate article in this issue). The company with partner Edison International made a deepwater discovery in the West Delta Deep Marine concession with the Simia-1 well. The well tested 44 MMcf/d of gas and was drilled in a water depth of 590 meters. This is the sixth well drilled in the concession, all of which encountered gas.

The company has since set up a gas sales agreement with Egyptian General Petroleum for the Scarab/Saffron Field also in the West Delta Deep Marine concession. This will mark the first deepwater production off Egypt as well as the largest gas development in the country.

Meanwhile, in deepwater off Israel, BG has also been leading the pack. The company operates the Med Yavne concession with partners Isramco and Delek Drilling. Together, the companies have recently announced two major deepwater gas finds. In addition, Samedan drilled a discovery in the region with the Noa-1 well in license PL273.

This deepwater success has shed new light on the region and some major operators are beginning to take notice. For example, ExxonMobil acquired a 25% interest in the Northeast Mediterranean Block offshore Egypt from Shell. The block covers about 10 million acres and is located in water depths ranging from 2,600 ft to 9,800 ft and covers most of the deepwater Nile Delta area of the eastern Mediterranean Sea.

At this discovery rate, the area has the potential to be one of the hottest deepwater regions in the world. This, compounded with the incentives set forth by countries like Iran, continue to exhibit the power the Middle East holds over the industry.