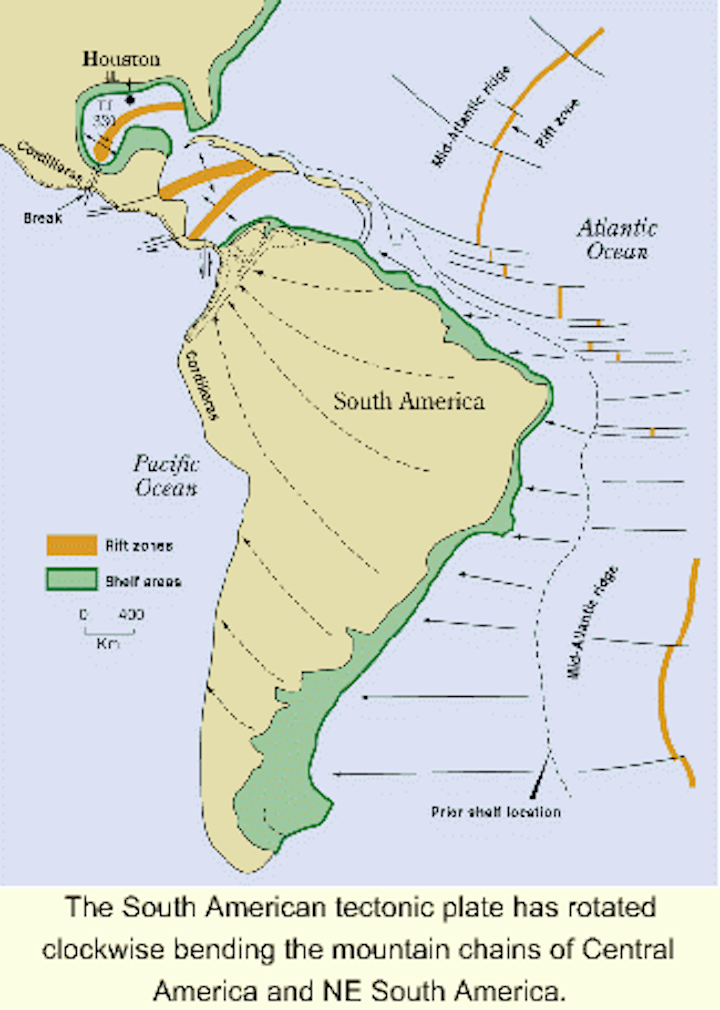 Most oil and gas fields in the Gulf of Mexico and Caribbean areas are located in deltaic Tertiary sandy formations of varied origins and ages. They occur around and above diapiric salt domes and in anticlines and faults. The producing carbonate formations are Upper Jurassic-Cretaceous in age.

The Upper Mesozoic-Early Tertiary producing formations, along the American Gulf coast, are onshore, whereas those of Upper Tertiary-Quaternary are offshore. Oil and gas production is found in serpentinite in Cuba, in pre-Cretaceous igneous basement rocks in Colombia, and on the western side of Lake Maracaibo, Venezuela. The oil gravity ranges between 7° API and 50° API.

Is it possible that some, or perhaps quite a bit, of Gulf of Mexico oil reserves are biogenically formed? Hydro carbons would not form from dead organisms in the oxygenated shallow depths of the Gulf of Mexico unless an impervious layer covered the organisms. Could the oil be formed by combining carbon (C) and hydrogen (H) at 300-500° C under high pressure in subduction and rift zones? Carbon is derived from carbon dioxide released from fractured mafic minerals in subducted basalt and lithosphere, and from the dissociation of calcium carbonate in subducted limestones. Hydrogen is derived from seawater in the subducted rocks.

Structurally, oil distribution in the southern US appears to be related to the Rio Grande Rise and Sabine Uplift. These locations match the hydrocarbon distribution from the Rio Grande to west-central Mississippi. The Upper Mesozoic-Cenozoic uplifts, and the successive diapiric movements of salt domes and sheets generated growth faults along, and tensile faults above, the domes, in addition to anticlinal and other structures in the deltaic sands. The widespread Jurassic salt deposits fed the salt domes, and was precipitated from an epeiric sea, before the Gulf area was widened by the Upper Tertiary clockwise rotation of South America.

Subduction beneath the northern coastal area of the Gulf of Mexico created today's topography from the Florida Panhandle-Alabama area west to the Rio Grande, and from the Gulf Coast north to the Ouachita Mountains. These boundaries delineate the oil producing land inside the Peripheral Fault System (PFS).

Westward from Florida, a portion of the Atlantic Coast NE-trending magnetic anomalies, was found to have changed its direction from NE to E-W with a pronounced northward curvature into Louisiana and Texas. The subduction's compressional stress probably re-oriented the southern part of the Appalachians, including the buried Ouachita Inner Zone and Ouachita Front. The northward curvature of the E-W trending magnetic anomalies, the bearing of arches within the PFS, the directions of the Buried Ouachita Inner Zone, and the Ouachita Front all appear to be parallel to the PFS.

The southeastward subduction began with the Upper Tertiary opening of the SW-NE trending rift zone along the northern part of the Caribbean Sea and continues to be active. The clockwise rotation of South America caused the rifting. The seafloor spreading in the Caribbean Sea runs southeastward, causing the subduction beneath northern Colombia, Venezuela, and Trinidad. Such spreading fractured and faulted the rocks, and reoriented the northern Andes, while the clockwise movement of South America continued to exert compressional stress on Central America and Mexico. Costa Rica, Panama, the Antilles, and Lesser Antilles Islands were not affected by subduction.

Barbados yielded some petroleum because it was subducted along with Trinidad. The loss of light hydrocarbons was noted along northern Colombia, Venezuela, and Trinidad. Barb ados and the Lesser Antilles Islands were drifted and bent westward. During the westward rotational bending, subduction may have taken place and hydrocarbons may have formed. These were later burned by volcanic activities or lost to the atmosphere. South America rotation is supported by:

The cause of the post-Cordilleras rotation of South America would logically be the pressure on the northern portion of South America, from Venezuela to the eastern-most point of Brazil, exerted by the bulge of the mid-Atlantic rift. This also accounts for the bending and displacement of the Antilles and Lesser Antilles island arcs.

The origin of hydrocarbons in the region appears to be not unlike that found in the Persian/ Arabian Gulf area. In both locations, many questions cannot be answer ed by relying on organic origin alone. For example:

Where and how did the hydrocarbons originate? The following are some thoughts on controversial and unsolved problems surrounding this issue:

If there is some validity to these considerations, then it would solve an age-old problem. Such generated hydrocarbons would continuously re-supply hydrocarbons to fields, and would increase the total reserves as long as subduction activity continues. Thus, the deep Pleistocene hydrocarbon reserves in the Gulf of Mexico could range above the presently estimated 20 billion bbl of oil.

If so, the subduction process would explain the origin of Ni, Co, V, U, Fe, Mg, and S found in the hydrocarbons. All are present in subducted basaltic crust, and its subcrust lithospheric peridotite. A few organic compounds may have modestly supplied some of those elements, such as Mg (from diatomaceous and other algae), Fe (from hemoglobin), Co (from vitamin B12), and others.

In order to produce hydrocarbons in such a manner, carbon and hydrogen should be adequately supplied from sources in subduction areas and rift zones. They could then re-charge permanently producing oil fields, combining under the 300-500° C temperature range to form hydrocarbons. Ferrous iron (Fe+2) acts as a helper in the reduction reactions. If this process could supply hydrocarbons to the oil and gas fields through openings in the study area, if would occur only as long as the region is tectonically unstable.

The carbon and hydrogen necessary for the formation of hydrocarbons can originate from both organic and inorganic sources. Such a process could then aid the continuous re-charge of reservoirs in the Gulf of Mexico and Caribbean similar to that taking place in Eugene Island Block 330, and in northern Colombia, Venezuela, and Trinidad. Modest onshore and offshore reserves in the study area might then be attributed to inadequate seepage of seawater in subduction zones, and/or to clogging of openings by clay.

The location of oil and gas fields, along, nearby, or above subduction and rift zones, suggests a relationship with geodynamic activities and chemical processes. The necessary pressure is supplied by the clockwise rotational of South America and subduction events. Fractures, faults, and other openings provide a route for hydrocarbons to reach traps and accumulate.

A similarity exists between the processes, which formed hydrocarbons in the Persian/ Arabian area, and in those formed in the Gulf of Mexico and Caribbean Sea regions. Thus, an application of infrared and radar imaging surveys might help to delineate and explore subduction zones.