After 15 years as a co-venturer or exploration operator on the UK continental shelf, GDF SUEZ is preparing for a leading development role. 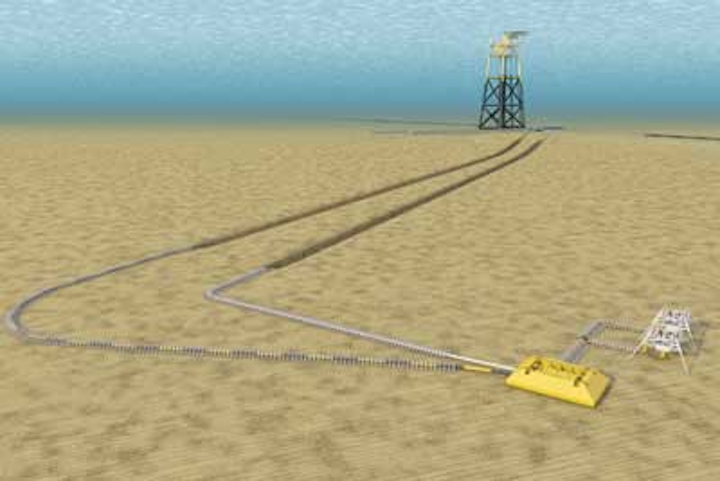 After 15 years as a co-venturer or exploration operator on the UK continental shelf, GDF SUEZ is preparing for a leading development role. The company already runs numerous gas production centers offshore Norway and the Netherlands, but Juliet and Cygnus in the southern North Sea will be its first major operated UK projects. Cygnus will be one of the company's largest developments anywhere, supplying around 5% of the UK's future domestic gas production in 2016.

Government sanction for Juliet, a subsea tieback to Perenco's Pickerill A platform, came through in June, and authorization for Cygnus was expected this summer. To support these projects and four others close to development in the UK North Sea, the company has commissioned a new office complex in Aberdeen.

"Our aim is to be a leading UKCS operator, not just in the southern gas basin, but in the mid-term also in the central North Sea, and in the longer term West of Shetland," said Jean-Claude Perdigues, managing director of GDF SUEZ E&P UK. "We believe there is still a lot of potential to tap into on the UK shelf, even though it appears mature."

Since entering the UK sector in 1997, the company has amassed interests in over 40 offshore licenses, 16 as operator, and claims to be the UK's eighth-largest offshore acreage holder. It currently has net proven (2P) reserves of 65.5 MMboe, mainly in the southern gas basin, and 88 MMboe of net contingent (2C) resources in the central North Sea.

Juliet was discovered in 2008 in 58 m (190 ft) water depth in southern North Sea block 47/14b. The location is close to the English east coast and the Amethyst offshore production complex. According to analysts BritBoss, the company originally applied to develop the 100-bcf field in 2010 via the nearby Amethyst field complex, but planning had to be put on hold to find a new offtake route for the gas. It will be tied-back to Perenco's Pickerill A platform to the east via a 22-km (13.7-mi), 12-in. (30.5-cm) pipeline and control umbilical.

Development and Operations Manager Mike Robertson said a jackup supplied by the company's Dutch affiliate GDF SUEZ E&P Nederland will start drilling the first of Juliet's two horizontal subsea wells next spring – these will be connected to a 170-t template/manifold. The subsea contract, which should by now have been awarded, covers installation of the control umbilical and export pipeline, which will be laid in separate trenches and backfilled. At Pickerill A, modifications will include installation of a new riser and J-tube.

First gas is slated for late 2013, with production transported from Pickerill A to the Theddlethorpe terminal on the east coast. At peak, Juliet should deliver 80 MMcf/d. "The plan is that Juliet will come off plateau fairly quickly," Robertson said, "but the template will allow tie-ins from other discoveries in the area." With this in mind, GDF SUEZ aims to drill one exploration prospect in the vicinity in 2013/4. The company has a 51.6% interest in the project, in partnership with First Oil Expro (29.44%) and Hansa Hydrocarbons (19%).

In 2014, the company aims to bring Orca, another southern sector gas field, onstream via a wellhead platform tied-back cross-border to GDF Suez E&P Nederland's D15 platform. Orca has changed hands various times over the past few decades. According to GDF SUEZ E&P UK Subsurface Manager Andy Spencer, it took time to understand how to develop the field economically. "Orca's volumes are fairly modest, and the calorific value of the gas, which contains 20% nitrogen, is not suitable for the UK distribution system, although it is acceptable for the Dutch market. So getting an economic solution for Orca has solved a long-standing problem."

Oonagh Werngren, Business Manager, Supply Chain, said the Cygnus field in blocks 44/12a and 44/11a is the largest discovery in the UK southern gas basin of the last 25 years, with 2P recoverable reserves estimated at 720 bcf. In terms of the UK's remaining reserves it is the sixth largest gas field, she added.

Marathon Oil drilled the original discovery well in 1989, but back then it looked small, with a poor reservoir and no local infrastructure. After acquiring the license in 2002, GDF SUEZ E&P UK as the new operator applied its experience in marginal Rotliegendes reservoirs to drill five successful appraisal wells from 2006 onwards. Assuming sanction this summer, the company hopes to bring Cygnus onstream in late 2015 via 10 horizontal wells.

The target date is a year later than scheduled in the original Environmental Statement for the project. This is partly due to a change in development scope following further appraisal drilling success, but also – according to Perdigues – because of the industry's current inflationary cost environment. "So we have focused in the FEED on optimizing engineering, trying to keep costs manageable. Cygnus is not a very complicated project technically, but due to the field's very large extent and the shallow water, we need to invest more. There has to be four platforms and 10 wells, and that all pushes up the cost."

The finalized scheme calls for a main Cygnus Alpha hub on the eastern part of the field comprising three bridge-linked platforms providing drilling, accommodation, processing and gas export, and another wellhead platform (Cygnus Bravo) on the western part of the field. This will be linked to Cygnus A via a 5.9-km (3.6-mi), 12-in. pipeline, with the commingled production sent through the Eagles Transport System pipeline that runs between Perenco's Trent platform and the Bacton terminal on the Norfolk coast.

GDF SUEZ sees further reserves upside in the area, particularly in undrilled lobes on the northern flank of Cygnus. The company hopes to drill a well here next year, Spencer said, using the jackupEnsco 80.