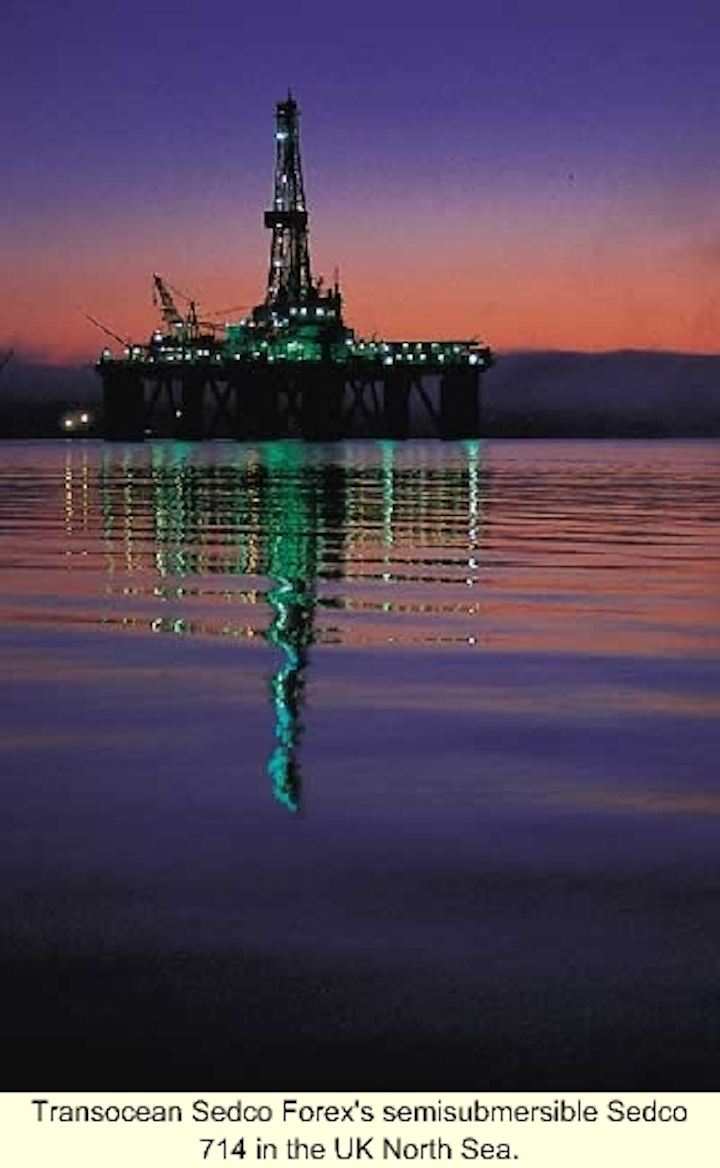 For a maturing area of the world, offshore Europe, particularly the North Sea, is finding ways to re-invent itself. A widespread movement to lower the cost of field refurbishment is beginning to open up investment in mature fields. At the same time, new exploration, especially off the Faroes, is keeping activity in the Atlantic Margin fresh.

Data from the UK Department of Trade and Industry shows that drilling in that sector increased 6.8% last year. A total of 269 wells were drilled in 2000. With the present investment climate, these numbers will go up in 2001.

In the coming year, development drilling will dominate activity, with satellite extensions from existing fields and tiebacks to established platforms. Because the North Sea is a developed market, well workovers will be significant as companies extract remaining reserves in established fields.

The "White Zone" could be a new area of interest. Located between the Shetland and Faroe Islands north of Scotland, the zone is about to see increasing exploration activity as the search for oil and gas reserves on the UK continental shelf widens.

A considerable number of significant oil and gas prospects have already been identified. A formal invitation to bid for the licenses was contained in the 19th UK oil and gas licensing round. Another plus for the North Sea is the preliminary move toward shared activity between the UK and Norway, though officially, little has been agreed upon.

In Denmark, most of the current activity is in the development of identified fields. Statoil has made plans to drill a well on the Stine prospect on the Danish continental shelf about 7 km east of Statoil's Siri field. The objective is to decide if the find is profitable enough to develop. If development takes place, the production well will be on Siri field or Stine prospect, which are both on Block 5604/20.

The Dansk Undergrunds Consortium (DUC) submitted a $520 million plan for more development on Halfdan field off Denmark. The scope of the plan encompasses drilling 11 wells with 3,000-5,000 meter horizontal sections for the production of oil, along with 11 related water injection wells.

In August of last year, the Faroes Ministry of Petroleum awarded seven oil and gas licenses, the first ever for blocks on the Faroe shelf. About 14,000 sq km was up for licensing, and the applications covered about half of that area. The award of these blocks marks the opening of an area that oil and gas producers have been interested in for a long time.

This will be the first year of significant seismic activity on the Faroese shelf. Until recently, the median line between the UK and Faroes was in dispute, but following the demarcation of the area two years ago, the Faroes government released acreage in the first licencing round. This summer, significant amounts of seismic data will be shot over these newly licenced blocks, which have geological similarities to the area around BP's Foinaven and Schiehallion fields in the UK sector.

Exploration is on a fast track. Six months after the award, Statoil Færøyene AS had already moved into new premises in Torshavn, the capital, where it will coordinate exploration of its two licenses (003 and 006). Two exploratory wells will be drilled this summer in around 1,000 meters water depth, approximately 180 km south of Torshavn. Positive results will presage increased exploration in this sector of the North Sea.

Significant seismic activity is planned for offshore mid-Norway this year in preparation for the 17th licensing round. Applications for acreage are not due until early 2002; however, a lot of 3D data is being collected this year to prepare for applications. Of particular interest is new seismic technology consisting of single-source, high-density surveys that are able to delineate structures in the highly prospective area north and west of the Norne field.

Traditionally, much of the mid-Norway shelf has suffered from poor seismic imaging, so the new data should greatly enhance exploration success in the area. There will also be significant levels of 4D seismic over Norwegian fields this year, with Draugen, Njord, Snorre, Norne, and Troll all being candidates.

Statoil has taken 100 core samples and extensive logs in production license 202 in the Barents Sea North Cape Basin and is evaluating its oil and gas discovery to determine if more appraisal wells should be drilled. The Norwegian North Sea and the Norwegian Sea will continue to see significant activity in the coming year.

Development in the Netherlands has been strong, supported by the extensive processing and exporting infrastructure. Gulf Canada Resources Ltd. subsidiary Clyde Petroleum Exploratie BV brought the Q4-A gas field in the Dutch North Sea onstream via a recently renovated platform. The field is producing using a completely refurbished installation, the first time this has happened in the region.

Two development wells, Q4-A2 and Q4-A3, are scheduled to be brought online in the second quarter. The Q4-B field will also be developed using the re-worked installation, and first gas is expected in the latter half of next year.

Clyde said the Q4-B field, discovered in 1998 7 km southeast of Q4-A, would be developed via the platform, with first gas expected in second half 2002.

Ireland is seeing more interest in gas exploration lately. Several companies, including Enterprise Oil, Murphy Oil, BHP, and Statoil have been busy setting up to drill in a number of areas. Statoil is involved in exploring deepwater acreage in the Rockall Trough and the Slyne/ Erris and Porcupine Basins west of Ireland. This area of the Atlantic Margin covers 12,166 sq km. The blocks west of Ireland reach a water depth of 300-2,500 meters.

Along with operator Enterprise Energy Ireland and Marathon International Petroleum, Statoil has submitted a plan for development and operation to the Irish authorities to develop the Corrib gas field 70 km off the coast of County Mayo in Ireland.

Analysts at Wood Mackenzie have estimated that Corrib holds about 1 Tcf of recoverable reserves. Until now, Ireland's sole source of indigenous gas has come from the Kinsale Head field in the south, which is declining. The development of Corrib will help constrain energy imports.

Statoil AS contracted with Transocean Sedco Forex for the Sovereign Explorer to spud the first exploration well on the Sarsfield prospect on the Irish continental shelf late this spring. Sarsfield is on exploration block 35/21 in the Porcupine Basin west of Ireland.

Although no one expects to encounter world-class reserves, the hope is that quantities found will prove profitable for development. Ireland will most likely use all of the gas recovered.

The Northern Mediterranean did not see a lot of activity in 2000. Italy saw the spudding of only six offshore wells, and most of those were in the Adriatic and Ionian seas. Spain saw one oil discovery near the Casablanca field complex. Repsol-YPF SA announced the Chipirón Northeast discovery in late February, and plans are in place for the field to be onstream in the latter half of the year.

The southern waters were a bit more active, with a discovery offshore Israel with recoverable reserves estimated as high as 1.3 Tcf of gas. Noble Affiliates, Inc. is carrying out exploration drilling over an 11-permit area, covering 1.06 acres, in hope of finding more recoverable reserves.

Most of the activity was offshore northern Africa. Egypt's Burullus Gas Co. has been contracted by the Egyptian Deepwater Development Consortium to develop fields offshore Egypt as part of the Scarab/Saffron gas development project in the eastern Mediterranean.

Meanwhile, Algeria's Sonatrach is enticing foreign investors in exploration blocks along the country's entire coastline. A 2D seismic survey consisting of 6,000 line km of data will help investors determine the value of exploration in this area.