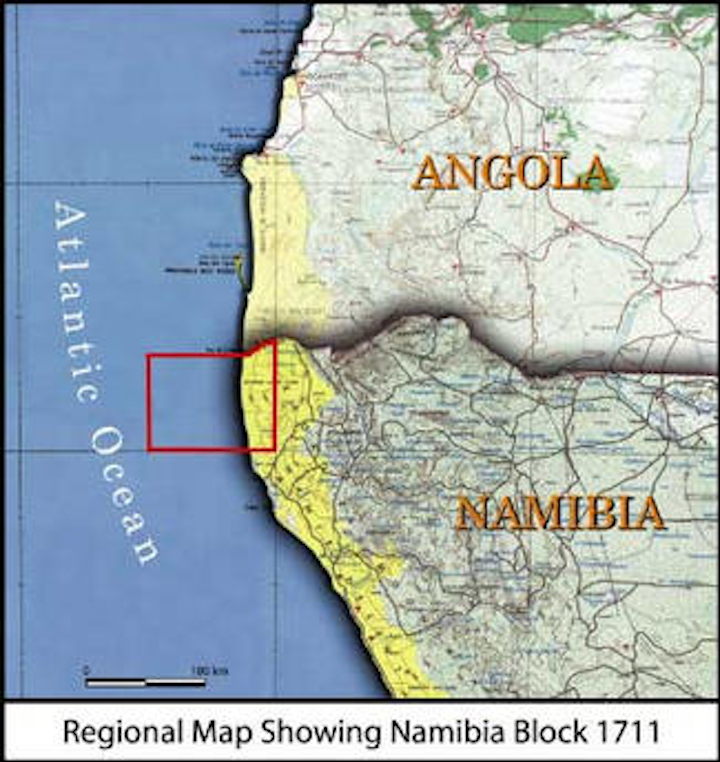 The barren beauty of Namibia's northern coast offers challenges for both oil and gas exploration and development. While a frontier such as this was out of reach only a few years ago, exploration technology, offshore capabilities, and attractive gas market prices have made finding a discovery offshore such a desolate place as the Skeleton Coast not only appealing, but possible.

The Namibe Basin lies offshore the Skeleton Coast and extends north into southern Angola. The 31,000-sq-mile basin appears to be related to Brazil's Santos Basin, but has no well history. It remains, for the most part, unexplored.

To date, the only activity in the Namibe Basin has been on the part of Vanco Energy Co. (operator, 88%), the National Petroleum Corp. of Namibia (Namcor, 9%) and Pamue Investment Corp. (3%). In June 2000, the group signed a petroleum agreement with the government of Namibia to explore the 2.2-million-acre License Area 1711, situated just south of the border with Angola, near the mouth of the Kunene River.

The onshore area of Skeleton Coast represents one of the most beautiful and desolate regions of the world, a coastline strewn with shipwrecks, where the horizon distinguishing land from sea can be blurred for hours by a thick sea fog. Desert sands and the Atlantic Ocean constantly compete to the extent that it is not uncommon to see a ship marooned half a mile inland years after its fatal wreck.

As a country, Namibia is enjoying a new independence as an 11-year-old republic, benefiting from its colonial past with Germany and Britain. The country has excellent infrastructure and one of the best telecommunications systems in the world.

Walvis Bay, on the Atlantic Coast, has nearly 19 miles of port shoreline and is the shipping gateway to Southwest Africa. In the heart of the country is the capital, Windhoek, situated on a high, cool desert plateau.

To the north, the Kunene River forms much of Namibia's border with Angola, cutting through the inhospitable Hartmann and Baynes Mountains as it makes its way to the Atlantic. Of the six rivers along Skeleton Coast, the Kunene is the only river that flows year round.

In some years, there is no rain in the region. In wet years, it may rain less than an inch. Namibia's population of 1.8 million lives in a land area half the size of Alaska, with nearly 80% living in the north under rural, non-arable conditions.

Offshore, there are attractive features for a hydrocarbon search. License Area 1711 covers a 51-mile by 67-mile rectangular area 35 miles offshore. With the benefit of 2D spec seismic and 3D seismic acquired by the Vanco group last year, Vanco has confirmed a 2,000-ft high carbonate buildup buried 7,000 ft below the seafloor in water depths of 2,600 ft. The 22,000-acre closure is big enough to contain major gas reserves, and possibly, significant oil reserves.

The presence of an active hydrocarbon system is inferred from a methane hydrate bottom simulating reflector (BSR) that extends 500-sq-miles across the block. The 3D seismic shows many vertical gas chimneys that extend through the shallow strata draped over the prospect.

If the mapped prospect contains oil and/or condensate reserves, a conventional floating production, storage, and offloading (FPSO) system could be employed, possibly in conjunction with gas-to-liquids technology. Conversely, if the prospect contains dry gas, a floating liquified natural gas (LNG) plant would be the preferred field development solution. Vanco has commissioned Halliburton's Kellogg Brown & Root to study the marketing and development feasibility of a field using the LNG FPSO system.

Spurred by US natural gas prices, the LNG market has taken a strong upturn. As a development model, a floating LNG plant would be a prime candidate. Although the capital cost could exceed $1 billion, such an offshore facility could cost 40% less than an onshore facility.

Given the onshore conditions of Namibia's Skeleton Coast, an offshore LNG FPSO plant makes sense. Passing vessels can supply the floating facility, and product can be offloaded to shuttle tankers destined for regasification facilities in Europe and the United States.

US LNG terminals are located in Boston, Massachusetts; Cove Point, Maryland; Elba Island, Georgia; and Lake Charles, Louisiana. New LNG facilities are being discussed for North Carolina and the Gulf of Mexico.

Given these offshore possibilities, a remote area such as Namibia will no longer be remote and could provide the example for offshore facilities of the future.