Deepwater pipelines costly, except where gas cannot be flared

John Mercier, pictured here at the recent Deep Offshore Technology conference, is President of Global Maritime and a DOT board member. FPSO debate: The other side The crippling costs associated with deep water pipelines and the absolute necessity to enable floating production, storage, and offloading vessels (FPSO) to operate in the US Gulf of Mexico was a key topic at this year's Deep Offshore Technology conference (DOT'98) in New Orleans. 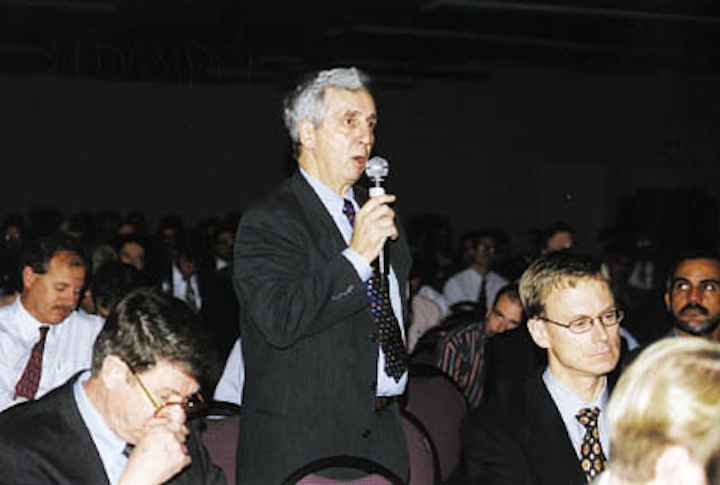 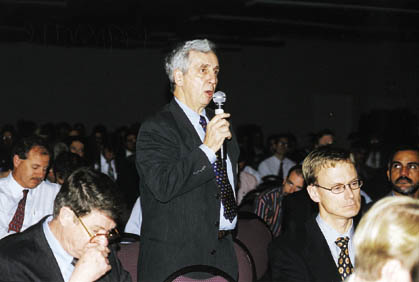 John Mercier, pictured here at the recent Deep Offshore Technology conference, is President of Global Maritime and a DOT board member.

FPSO debate: The other side

The crippling costs associated with deep water pipelines and the absolute necessity to enable floating production, storage, and offloading vessels (FPSO) to operate

in the US Gulf of Mexico was a key topic at this year's Deep Offshore Technology conference (DOT'98) in New Orleans.

Excitement about bringing in this technology was not universal, however. John Mercier, president of Global Maritime and member of the DOT Conference Advisory Board, said FPSOs will play a limited role in the Gulf.

Several speakers at the conference referred to the discouraging cost of deepwater pipelines as a major problem for advancing development of such fields. The use of FPSO has been very successful in the North Sea and offshore West Africa. The technology was touted as an alternative to building extensive deepwater pipelines off the shelf in the GOM. Emphasis was placed on the regulatory hurdles this new technology faces rather than the practical cost aspects.

Mercier believes that once FPSOs are approved for use in the Gulf they will play a very limited role. His point is that even if the new vessels allow operators to store rather than pipe crude, there is still the question of produced gas. It is illegal to flare gas in the Gulf of Mexico, which means there must be some alternative for handling the large quantities these fields will produce.

An operator can go one of two ways. He can either reinject the gas, an expensive process that would most likely only be profitable on the largest of fields, or he can pipe it to shore. In Mercier's view the cost of this gas pipeline would almost certainly offset any savings an FPSO might offer.

He points out that if an operator is going to the trouble and expense of building and installing a gas pipeline, the additional cost of a crude export line is not that great, especially when seen against the expense of a new-build FPSO.

For certain very large, very deep fields, the FPSO might be the way to go, but Mercier also points out that much of the deepwater now being explored in the Gulf of Mexico is less than 100 miles offshore. The US Gulf of Mexico has one of the most extensive pipeline networks in the world with the capacity and flexibility to serve a variety of these frontier locations.

Mercier said in the area of floating production he sees more promise in the mini tension leg platform and spar designs with conventional export pipelines that tie into the GOM network.

With the continued slump in oil prices, Mercier said he is seeing oil companies moving quickly to control costs and pull back on projects. He said even in this environment, deepwater is an attractive theatre. In the Gulf of Mexico specifically, Mercier said the high prices operators have paid for leases and long term rig contracts is spurring them to continue with development projects. In addition, the potential of making significant finds appears to be much greater in deepwater fields, areas that are relatively virgin, than in the well-explored, on-shelf fields.

While independents are feeling the squeeze more so than the majors, Mercier said it is essential that these operators maintain a presence in deepwater development either direct or indirect. He said any involvement is preferable to losing out on the rapid development of new technologies and methods for exploiting these deep and ultra deep resources. An operator who drops out now will have a difficult time returning because of the rapid nature of progressing technology. Even a hiatus of two years would pose a threat to an operator's ability to compete in deepwater.