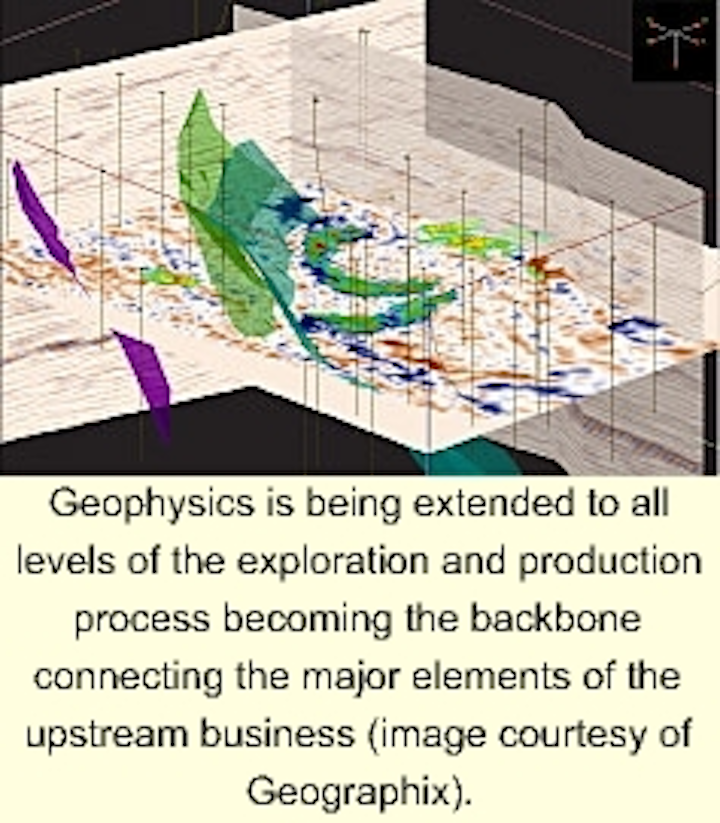 GX Technology will process the 7,500 line-miles of TGS-NOPEC's Phase 49 non-exclusive seismic program using its EarthWave™ suite of software. The survey covering portions of DeSoto Canyon and Lloyd areas of the eastern Gulf of Mexico will have prestack depth migration (PSDM) applied to the data set. An operator normally applies PSDM after licensing data; it is not generally applied to speculative non-exclusive surveys.

Schlumberger launched a commercially licensed version of its Seismos™ data analysis software at the SEG convention last month. The system is an integrated package for surface seismic processing from Geoquest. It is a modular system with a database driven kernal that integrates the best geophysical models developed by the company.

Racal Survey Group Ltd announced a solution to ionospheric disturbances of differential global positioning system (DGPS) performance. Its SkyFix Premier dual frequency positioning service will reduce positioning errors caused by sunspot activity. Such activity and resulting errors are expected to increase over the next two years and remain common for up to four years. Sunspot-induced errors can be as great as 15 meters.

A2D Technologies released smartSECTION 4.5, a client-server version of their geologic software. This new version will allow professionals to share data and interpretations across their network. The software is Oracle™ based with an open architecture that allows companies to link directly to any corporate database. "Multiple users will be able to optionally view other user's tops, interval data, and inter-well interpretations. At the same time each user has the ability to 'lock' their data, so it cannot be edited or changed by another user," said William Ross, Executive Vice President of A2D.

Major advances in the use of acoustical imaging coupled with the expansive power of new computing systems and imaging techniques is extending the reach of geophysics to all levels of the exploration and production process. The issue was a major topic at the Society of Exploration Geophysicists (SEG) convention in early November. Acoustic imaging is becoming the backbone that connects major elements of upstream business. Other topics at the SEG conference include:

This forward vision has been presented many times over the last five years, but the pieces are coming together within the immersive environment of virtual reality imaging. Jeff Hume, President and CEO of Continuum Resources, has stated it most recently.

"As these earth models are populated, they will no longer exist as file folders in an individual's drawer, or on disparate computer installations. Rather they will be accumulated in a central comprehensive, enterprise-wide data model that provides flexibility and security.

In addition, professionals will be able to access their own particular data using familiar software from the desktop. Should team collaboration be required, the same views will be viewable in the team room on the wall-sized projector using the same software and instruction set - no more carrying rolls of maps to a meeting and spending time arranging them on a wall. Finally, larger immersive environments - again, with the same user interface - will be available for large presentations and full-blown immersion."

Brazilian surveys
PGS do Brasil announced that it began acquisition of its 3D multi-client survey in the Campos Basin offshore Brazil. The first phase will gather 8,500 sq km of data.

TGS-NOPEC announced the halfway point in its 85,000 km 2D program offshore Brazil. In 2000, the program will be expanded to over 150,000 km. The survey is being gathered by the TGS-NOPEC Northern Access, Schlumberger's Akademik Shatskiy and Marlin.

The 4Sight Alliance (Schlumberger/Seitel) began an OBC-4C survey in the West Cameron area of the Gulf of Mexico. Three vessels will participate in the 35 block (800 sq km) survey: The Geco Snapper will carry sources, while the Geco Manta and Geco Dolphin will handle ocean-bottom cable placement. The alliance, covers 444 GOM blocks over nine planning areas.

TGS-NOPEC is expanding its Mississippi Canyon survey to cover 600 blocks. The survey will be gathered by Schlumberger's M/V Geco Searcher and CGG's M/V Mistral. Delivery of final data sets will begin in late 1999 and continue into 2000.