The past 10 years have seen the development of the marine controlled source electromagnetic (CSEM) method for hydrocarbon exploration. 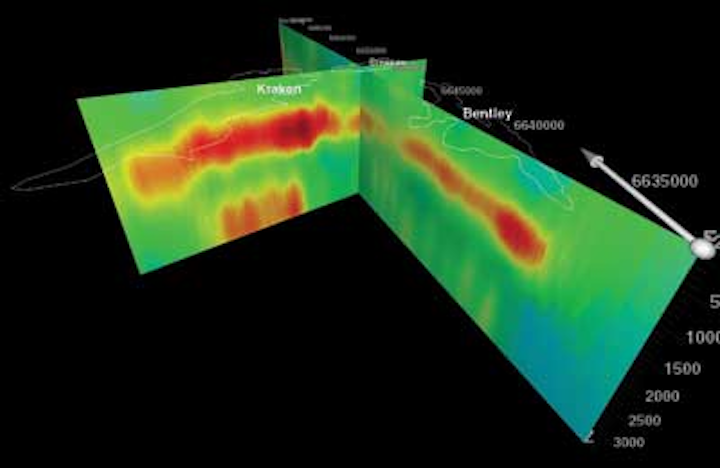 The past 10 years have seen the development of the marine controlled source electromagnetic (CSEM) method for hydrocarbon exploration. The survey method exploits the increased electrical resistivity of hydrocarbon-saturated rocks to detect likely accumulations of gas or oil in the subsurface. Subsurface resistivity is measured by creating a strong EM field from an electric dipole source, and placing receiver electrodes at a distance. The EM field propagates through the water column and into the subsurface, and the measurements at the receivers can be used to determine the resistivity at various locations and depths.

The most common technique is to place receiver equipment into individual remotely powered units called "nodes." An array of nodes is placed on the seabed and the dipole source is then towed in a regular grid or along specific survey lines. During the survey the node units record the received data, which is recovered after the nodes are released back to the surface once data acquisition is complete. The most favorable target for node based systems is deepwater, where noise levels are low and the economic incentive of very expensive wells make CSEM an attractive option to de-risk investment.

Node deployment and retrieval is time consuming, and just as there is an economic driver to acquire seismic data efficiently with a towed array encapsulated in a streamer, there are economic advantages to be gained if a similar approach could be adopted in the development of CSEM. The main obstacle to towed streamer electromagnetic surveying is the presence of EM noise. Towing EM receivers means they move within the Earth's EM field and are subject to induced noise. Also, efficient towing means that the receivers are currently within 100 m (328 ft) of the sea surface which means they are subject to the natural fluctuations in the earth's magnetic field known as magnetotelluric (MT) noise. In spite of these fundamental issues, the cost advantages of a towed streamer electromagnetic system make it economically viable for use in shallower waters on the continental shelf where budgets may be less likely to support a node-based approach.

Can a towed streamer EM system really deliver valuable information? PGS has designed a system with several key features to overcome noise and to achieve the necessary signal-to-noise ratio for effective surveying. Based on survey results collected late last year, PGS is confident that proof of concept already has been achieved.

Experience from marine seismic shows that a towed streamer electromagnetic system can be more efficient than placing and retrieving seabed nodes. But is the data fit for purpose?

Preliminary data examples from the 2012 PGS EM survey, suggest that the towed streamer electromagnetic system can be an effective solution to EM surveying based on results from several known continental shelf fields offshore Norway. Data was acquired by the PGS seismic vesselNordic Explorer which is enabled for EM operations. A single 8-km (5-mi) long EM streamer was towed behind an 800 m (2,624 ft) bi-pole source at ± 1,500 A. Data was acquired over several targets in the North Viking graben.

Several oil companies are evaluating the technology for use in 2013 EM surveys.

PGS has worked on a towed EM system since 2004. In 2010, towed surveys were conducted in the North Sea over Statoil's Peon discovery (PL 318). The system was further tested on a deeper target over the Troll gas field (PL 054 and 085). In each case, data clearly indicated the presence of the gas reservoirs by detection of their resistive anomalies. These were compared to detailed resistivity models created from well data, seismic data, and iterative 3D forward EM modeling.

Robustness and equipment handling was tested in heavy seas. Data was acquired at a speed of around 4- 5 knots, similar to the rate at which seismic data is acquired.

During 2013, theNordic Explorer will also be available for 2D seismic surveys between EM projects, avoiding the down-time that has traditionally been a challenge for EM operators. By offering a common platform for both seismic and EM operations towed streamer EM could provide additional commercial benefits for both the customer and the supplier.