Data management, integration, and collaboration, particularly involving exploration, are topics of conversation in upstream oil and gas circles when it comes to technology trends. 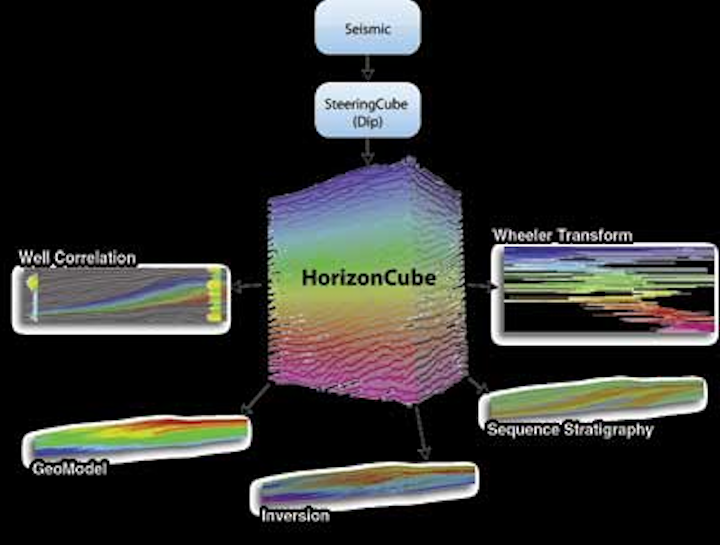 Data management, integration, and collaboration, particularly involving exploration, are topics of conversation in upstream oil and gas circles when it comes to technology trends.

Along with the massive amounts of data resulting from today's offshore seismic acquisition approaches comes the challenge of finding the correct data when it is needed, and developers are working to take data management tasks off the geoscientists' list to free time for interpreting that data.

Enabling collaboration comes from the recognition that subsurface data can be valuable not only to geoscientists, but also to drillers and production personnel.

Software environments available to multiple users in multiple disciplines and multiple locations are the target. Open platforms are the current answer. These open platforms have generated another influence, and that is the addition of plug-in tools by outside developers as well as those from the platform suppliers.

Two of the biggest names - Landmark and Schlumberger - foster the development of plug-ins to their respective processing platforms. Landmark has its DecisionSpace platform that uses OpenWorks software, and Schlumberger has its Petrel program collection that uses Ocean framework. For example, Open Works can connect to the Petrel Bidirectional Connector via the DecisionSpace Data Server. That means data can be moved from DecisionSpace to Petrel and back.

For some time, Landmark has made Software Development Kits available to programmers to make plug-ins for OpenWorks. Now, similar kits are being developed that will work in DecisionSpace as well.

The attraction of programming for the geophysical industry is growing as a result, too.

Tibco is working on OpenSpirit software that aims to make it easier to search multiple databases. It connects a number of subsurface software packages, including Petrel, OpenWorks, the PPDM open format, and Paradigm's Epos.

Using Hadoop, Tibco says OpenSpirit can search for data on horizons, wells, seismic returns, well logs, etc. to find data that fits the search parameters. Those parameters can be defined by drawing a box on a map or by setting filter limits such as depth.

Rockeye is drawing on its experience with developing computer games to address seismic data visualization. The company has developed a way to speed the task of loading 2D and 3D SEG-Y files to make it easier to visualize. The software can search for interpreted SEG-Y data files and after processing shows the data in a 3D visualizer. It allows taking a data cube for closer inspection, making slices through the data, and can make a best-fit fault line to create a surface.

This high-powered interpretation requires high-powered processing capacity. Toward that end, Intel and Hitachi have joined to develop a data center around Linux clusters specifically to meet the massive data amount collected by oil and gas operators. Called Lustre, the file management system can handle tens of thousands of computer nodes, petabytes of storage, and reach data processing speeds in the hundreds of gigabytes/second range, says the joint venture. Imaging seismic data and sharing of real-time information are its purposes.

Sigma3 has just launched the CRYSTAL 2103 platform which directs its attention to building models that connect microseismic derived Stimulated Reservoir Volume to actual production volumes. CRYSTAL 2013 has new tools such as broadband spectral inversion for enhanced resolution and tools to model natural fractures.

Interpretation is one part of the geophysical equation, and visualization is another factor getting a lot of attention. The addition of programmable graphics processors to the hardware allows much faster processing for visualization with real-time rendering. GPU-based raycasting rendering, for instance, can handle unstructured meshes and deformable textures to better compose multiple frequencies.

Three-dimension visualization that relies on GPU chips is a rapidly developing field. The speed with which the computational and presentation graphics can be processed makes this possible. There are experiments where the addition of GPUs can show results as much as 80 times as fast as CPUs alone, depending upon the exact processing involved. It is possible to work in both time and depth 3D, too, for better integration of seismic interpretations and geophysics workflow.

IHS' PETRA database can be accessed directly by a 3D visualization module rather than having to import the data.

Deco Geophysical Software recently released RadExPro 2013.2. Key advances include the addition of a post-stack Kirchhoff time migration option that allows both vertical and lateral changes in migration velocities either from the database or manual set-up. This works in conjunction with the new Interactive Velocity Analysis module that can provide input data to the Kirchhoff migration.

TerraSpark Geosciences has reduced the time required for fault extraction from five days of compute time to 20 minutes, the company says. And, the Fault Interpretation Workflow has been streamlined to require fewer steps to go from 3D seismic amplitude volume to a complete set of fault surfaces. TerraSpark also added Nvidia's Kepler-generation graphics cards to enhance its compatibility with other 3D seismic interpretation systems.

What is on the seismic technology horizon?

The pace of advancement among data handlers and processors is fast. Looking at the near future, there are a number of developments in the works. Among them are Paradigm's "augmented reality" and Landmark's DecisionSpacemobile.

"Augmented reality" refers to the use of seismic data to manufacture in 3D a representation of the subsurface that originally was modeled using Paradigm SKUA software. Paradigm is experimenting with a software tool that makes a video image of the 3D subsurface feature and then superimposes results from other interpretation tools such as faults, well data, and stratigraphic features.

This allows examination of the model from different directions, analysis of petrophysical and seismic data, representation of geologic features, and more to help with everything from well siting to drilling trajectory to production behavior.

DecisionSpacemobile aims to provide a tool whereby users can work on data using mobile computers without a connection to the core database.

Schlumberger is looking at ways to include the subsurface petroleum systems information within geoscience software. This would add information regarding hydrocarbon maturation and reservoir properties to make more accurate well planning.