Successful subsalt exploration in the Gulf of Mexico is not simply a matter of more and better seismic data acquisition. 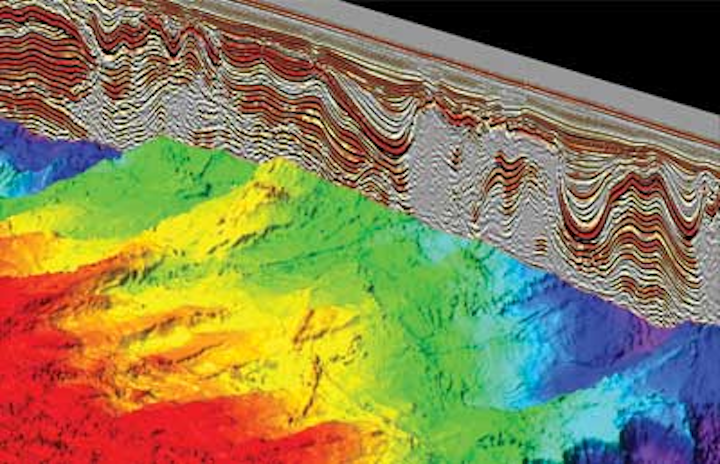 Successful subsalt exploration in the Gulf of Mexico is not simply a matter of more and better seismic data acquisition. Beyond the astonishingly rapid evolution in migration algorithms, velocity model building techniques, and marine acquisition methods is the use of the data. The most effective use of the data requires people, collaboration, and computation.

The key to technology application is the people involved, both in innovation and application. Effective application of the technology is required in the GoM post-Macondo, not only due to increased costs of drilling but also the necessity to reduce drilling risk. More data and more processing creates more potential for subsurface imaging to reduce uncertainty and even warn of drilling hazards around and within the salt. This ultimately can be accomplished only with a greater number of higher caliber personnel to push the technological envelope.

Essential to making the people effective is collaboration. Those doing the imaging and those doing the interpretation, the seismic companies and the oil companies, have to cooperate to get the best value from the data. Salt imaging is still difficult. Obtaining the best interpretation of the salt structure and its underlying stratigraphy requires not only the seismic service company's knowledge and experience, but also that of the operating company personnel, who may have insights from related drilling in an area. Geologists, geophysicists, and operating company personnel are all required to work together to get the greatest benefit from the raw data.

This process of collaboration is one that requires many iterations of testing and imaging. When 100 or more migrations are run to interpret a salt feature, each bit of known information is used to obtain accurate results. This applies both to newly acquired data and to existing data, which is often re-imaged multiple times to take advantage of technological advances and increasing familiarity and expertise with the geology.

These massive amounts of data and high number of iterations have increased computing demands exponentially. To handle this increase, BP, for example, has started to build in Houston what may be the largest commercial supercomputing complex to date. The High-Performance Computing center will be BP's worldwide hub for processing and managing geologic and seismic data across all of BP's assets. The HPC will have 67,000 CPUs and is expected to process data at a rate of as much as two petaflops. The total memory will be 536 terabytes and the disk space will total 23.5 petabytes.

For several years, CGGVeritas has participated in this move to increase computing power to support the breakthroughs in imaging technology. Because of its Houston center's computational capacity, computer power is not a bottleneck in seismic imaging advances. However, increasing capacity alone is not the sole strategy - the processing center also has been a focus for innovative thinking. Graphical processing units (GPUs) account for a large percentage of CGGVeritas' Houston center's processing power. GPUs have a much larger computational volume per unit than do CPUs, though they generate more heat. CGGVeritas has adopted cutting-edge liquid cooling for its GPUs to stabilize performance and to hold the line on electricity consumption.

The Gulf of Mexico, with its rich hydrocarbon rewards and complex geological structures, has been a traditional testing ground for seismic imaging. Depth migration technology has evolved from the post-stack depth migration to RTM, aka reverse time migration. RTM accuracy now is available prestack, as are RTM 3D gathers that retain the azimuth and reflection angle information of wide-azimuth data and improve modeling through better tomography, anisotropic inversion, and true-amplitude reservoir attribute analysis.

With the increased accuracy of migration algorithms, velocity model building remains vital to improved imaging. High-density and multi-layer tomography and full waveform inversion (FWI) are state-of-the-art. Velocity model building and migration have been improved to incorporate more anisotropic complexities to give more accurate representation of the real geological properties.

The internal structure of salt bodies was formerly ignored, and this could compromise the accuracy of base salt and subsalt events. In areas with suitable geology, such as offshore Brazil's Santos basin, reflection tomography updates can now be made to salt velocities. Where tomography is not an option, if picks from intra-salt reflections are too sparse or erratic, "dirty salt" iterative reflectivity inversion can be used for modeling salt heterogeneities. Salt-involved imaging strategies in the Santos basin differ from those in the GoM largely because of the age and characteristics of the salt itself. Brazil's Santos basin presalt structures are in their original deposition position. The "presalt" is older than the "salt" in age and also in location. That is why it is "pre" salt rather than subsalt. The difference in the tectonic histories of the two salts creates the need for different imaging techniques.

Though acquisition alone does not make the difference in successful imaging, let us not forget the impact of acquisition advances on our ability to derive clearer images. CGGVeritas began the advance into wide-azimuth marine acquisition in 2004 with a survey for BP over its Mad Dog field. Subsequent wide-azimuth, multi-azimuth, full-azimuth, and similar multi-vessel strategies provide better sampling of the seismic wavefield for increasingly accurate reservoir resolution. StagSeis is CGGVeritas' next-generation acquisition solution that incorporates full-azimuth coverage and ultra-long offsets for illuminating targets below complex overburdens

Driven by the development of wide-azimuth acquisition, true-3D, anisotropic tools and algorithms were designed to realize the full potential of the wide-azimuth data. Seismic imagers use all the added azimuthal information to improve noise and multiple suppression, azimuth-dependent velocities for flatter gathers, and multi-dimensional interpolation and regularization.

Though these technological advances are individually impressive, it is their "toolbox" nature that makes the true difference in imaging advances. It is the collaborating teams of geologists and geophysicists working with the data who jointly determine the overall strategies and tools deployed to delineate even the most complex salt and subsalt structures. Also, this kind of collaboration is what sparks the ideas that become the future imaging breakthroughs.

What constitutes "subsalt" in the Gulf of Mexico and "presalt" offshore Brazil is not necessarily the same. Reference to "subsalt" in the GoM typically refers to strata beneath a salt layer where that salt layer is actually older than the rocks beneath. This happens when the salt migrates under pressure from its original location to a place above younger strata. This mobile salt is called "allochthonous" salt.

"Presalt," as the term is used offshore Brazil, refers to a salt layer that was deposited above a stratigraphically older rock. It has not migrated from its original deposition location, and is called "autochthonous" salt.