The trend toward integrated analysis of data collected from operations starting with exploration and running to the end of production got another boost with Schlumberger's release of Petrel 2012 E&P. 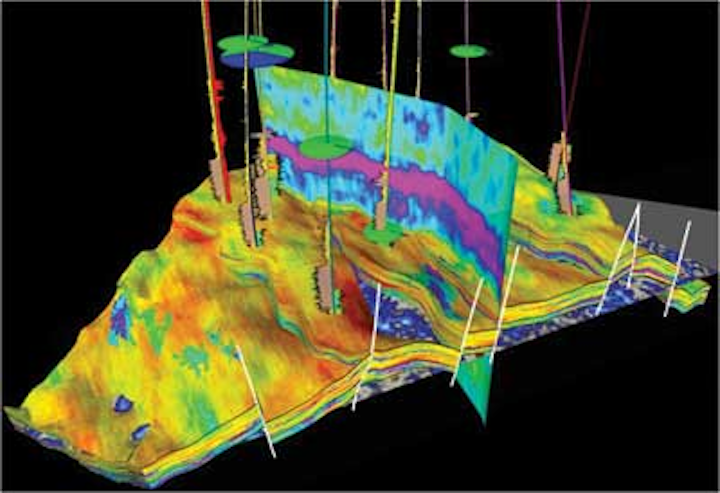 Knowledge Reservoir LLC has released the 2012 version of its deepwater knowledge base, ReservoirKB, covering all deepwater productive reservoir sands discovered, in production, sanctioned for development, or bypassed in the Gulf of Mexico, says the company.

Upgrades have been made both in application design and content, which now covers 300 fields, 900 reservoirs, and 1,277 wells.

On the processing side, NVIDIA has launched the second generation Maximus workstation platform that uses Kepler architecture. NVIDIA says the workstation will perform complex analysis and visualization at the same time on one machine.

Computing is done on the new Tesla K20 GPU and that leaves the Quadro K5000 GPU to handle the graphics.

CGGVeritas is busy acquiring its first StagSeis dual-vessel, long-offset multi-client full-azimuth survey in the Keathley Canyon area of the US Gulf of Mexico. This 221-block (5,150 sq km) full-fold 3D seismic data survey, known as IBALT, will take up to seven months to acquire and is the first phase in a multi-client program that CGGVeritas plans for the Gulf of Mexico over the next few years. A Fast Track data volume is expected to be available by mid-2013 and TTI RTM data will be the primary deliverable in the second half of 2013. The StagSeis program combines a patented acquisition design, based on a staggered vessel configuration, very long offsets (up to 20 km) and full-azimuth coverage (up to 10 km), with BroadSeis, CGGVeritas' broadband marine solution, to get better deep imaging of presalt plays.

ARKeX recently completed what it says is the largest single offshore full-tensor gravity gradiometry survey offshore Greenland for ION Geophysical. It covered 50,000 sq km (19,305 sq mi). The survey includes areas of the pre-round blocks that are on offer to the KANUMAS group and also the ordinary round blocks that will be offered in Greenland's 2013 license rounds. The FTG data is being integrated and jointly interpreted with ION's 2D Northeast GreenlandSPAN program. The results are expected to be available this September for license on a non-exclusive basis. "Acquiring 3D seismic in the North East Greenland is extremely challenging due to the extensive ice covering," said Phill Houghton, VP New Ventures for ARKeX. "ARKeX's airborne FTG survey can provide a 3D image set that once integrated with ION's 2D GreenlandSPAN, will afford potential operators in the region with the clearest picture to date of the area's potential." The NE Greenland region is estimated to contain 31.4 Bboe resources by the USGS (2008).The extensive NE Greenland continental shelf is the conjugate margin to Norway and the Barents Sea and is expected to contain the same rich Jurassic oil-prone source rocks.

Electromagnetic Geoservices ASA has a $7-million contract for 3D EM acquisition and processing in the Asia/Pacific region. It will acquire data from theEM Leader starting next month. EMGS services are another type of data integration within geophysics. EM data is being evaluated along with seismic and other geophysical and geological information in an effort to reach a clearer and more complete understanding of the subsurface.

The anomaly extends more than 240 sq km (92 sq mi) and is interpreted to be the deepwater equivalent of Lower Cretaceous Apto-Albian age shallow-water marine sandstones that BP encountered in its 43/13-1 well, drilled 80 km (49.7 mi) from Drombeg. An underlying second seismic anomaly also has been identified and appears to be consistent with hydrocarbon-bearing sandstone with a seismically derived thickness of 140-200 ft (42-61 m). Both anomalies appear to have a potential common downdip depth termination. A large Jurassic tilted fault block closure covering 150 sq km (58 sq mi) has been mapped beneath the prospect, and a fluid escape feature has been identified at its crest. This "chimney" appears to terminate at the downdip edge of the Drombeg seismic anomaly, providing potential evidence of hydrocarbon sourcing and migration into the prospect.