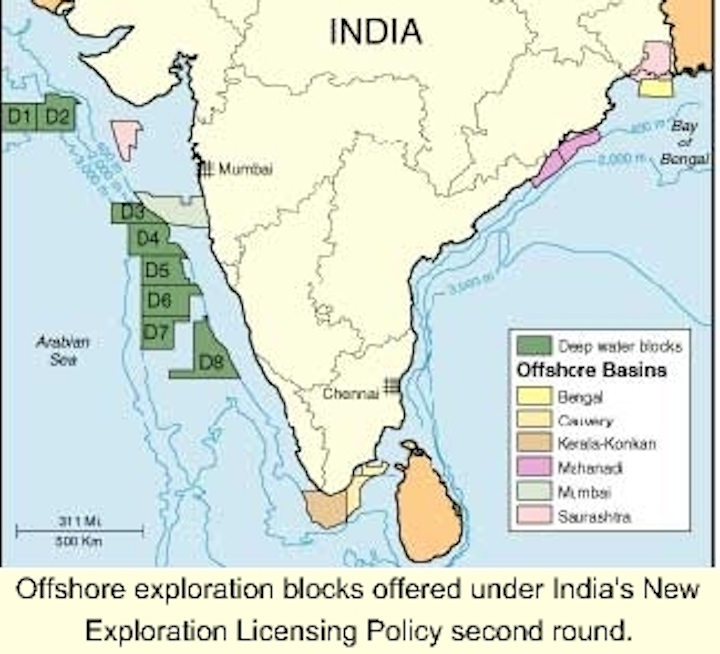 India's latest bid to lure foreign players to its shores includes eight deep and eight shallow water blocks, including some adjoining its most prolific petroleum basin, Mumbai Offshore. The launch of the second New Exploration Licensing Policy (NELP II) round swiftly follows NELP I, which led to 27 Indian PSCs (production sharing contracts) being signed in 2000 alone, compared with 23 over the previous decade.

Streamlining the bid process led to some PSCs being concluded within seven and a half months, said Shri Ram Naik, Petroleum & Natural Gas Minister, during a presentation in London in January. Formerly, three to four years was the norm. This proved that India's vault of red tape had been consigned to the dustbin, he claimed. "Transparency can now be seen everywhere ellipse we are moving fast and want to invite those interested in field development."

New projects are needed urgently to offset the impact of higher oil prices on India's import bill. This is forecast to rise from $12.3 billion in 1999-2000 to $17.5 billion in 2001. A $1.5 billion redevelopment program is underway at Mumbai High, and further development is possible offshore Gujarat, off western India, where Cairn Energy recently recorded a third offshore gas discovery - Gauri - from its current drilling campaign.

Cairn and others are also evaluating the 1.5 tcf Tapti Field to the north, which operator Enron has put on the market. However, as Ram Naik pointed out, it will be four years at least before any of these projects come to fruition. In the meantime, India's energy demands will mount as mainland industrialization gathers pace.

Despite the apparent success of NELP I, most major oil companies were missing from the bid list. But according to Ram Naik, some openly regretted not having taken part, and he was confident of greater take-up this time round - especially in light of ONGC's recent gas discovery in 844 meters of water in the Krishna Godavari Basin.

Following suggestions by those that did participate in Round 1, some improvements have been incorporated into the NELP II Model PSC. These have been designed to aid flexibility in operations, he said, notably in tax relief for deepwater activity. "Our fiscal regime is now the best in the world for deepwater," stated Dr. A. Sihag of the Petroleum and Gas Ministry, with a deep offshore royalty rate of just 5%. "Oil companies also are at liberty to specify what they would like to share with the government," he claimed. Other new features of NELP II include:

A website has been developed to convey relevant bid documents, tax guidance, and block geological and technical data. Also, in addition to the existing NELP data viewing center in New Delhi, further centers have been opened at the Indian Consulate in Houston and the Indian High Commission in London.

Five of the 25 NELP-2 blocks on offer include new data of recent vintage. The others have been upgraded, either with new data or by reprocessing or integrating with other relevant datasets, with the aim of improving play definition. Geology and prospectivity of all the blocks was outlined by Dr. Avinash Chandra of the Directorate General for Hydrocarbons.

All the deepwater blocks (classified as beyond 400 meters by the Petroleum Ministry) are off India's west coast. The two northernmost, GS-DWN-2000/1 and 2, are in the Saurashtra Offshore Basin, where sedimentary thicknesses range up to 6 km. Seventeen exploratory wells have been drilled in this basin with hydrocarbon shows in the Paleocene - Lower Miocene section. Seismic was last acquired in 1994. "Excellent" carbonate build-ups and wedgeout zones have been evidenced on several seismic lines, Chandra said.

Within the same basin, shallow water block (GS-OSN-2000/1) has been opened for the first time, situated north of the Mumbai High complex. Chandra described seismic coverage here as "reasonable," with very good hydrocarbon shows in five of the six exploration wells drilled nearby from Eocene to Oligocene sediments. "Potentially, the Saurashtra Basin as a whole could hold hydrocarbons amounting to 280 million tons."

Further south, one shallow and two deepwater blocks are available in the Mumbai Offshore Basin. This area has two giant fields plus 18 others in production out of 74 discoveries to date. Estimated oil reserves to the 200 meter depth level are 9,190 million tons, but there could be an additional 3.3 billion tons beneath the deeper waters further west, Chandra claimed. The area is also emerging as a major gas-producing province.

Over the two newly available deepwater blocks, seismic data coverage is moderate. Data from 1994-96 surveys has only recently been interpreted, and no wells have been drilled here. Analysis of the seismic shows "beautiful four-way closures" within structural highs, according to Chandra.

Heading south again, five blocks are on offer (four in deepwater) in the Kerala-Konkan Basin. The seismic data for deepwater blocks KK-DWN-2000/1 and 2000/2 suggests mature source rocks in the Paleocene and Oligocene, with large numbers of potential gas anomalies. "The evidence suggests this area is absolutely charged with hydrocarbons," he maintained. The two southerly deepwater blocks in this basin (KK-DWN-2000/3 and 4), however, are undrilled. The same applies to the one shallow water block in this basin, KK-OSN-2000/1, off India's southern tip. Chandra put the deepwater hydrocarbon potential in this basin at 5 billion tons.

Off the southeast coast in the Cauvery Offshore Basin, two blocks are on the table, CY-OSN-2000/1 and 2000/2. Elsewhere in this basin, there are small producing oilfields with proven reserves of 93 million tons and potentially a further 177 million tons to be discovered.

Finally, in the Mahanadi Offshore Basin close to the Bay of Bengal, the two blocks offered are again lightly explored, although there have been hydrocarbon shows in all wells drilled to date on this acreage, within the Miocene to Paleocene sections.