The Irish offshore Atlantic Margin is one of the final frontier regions in northwest Europe and one that is largely underexplored. 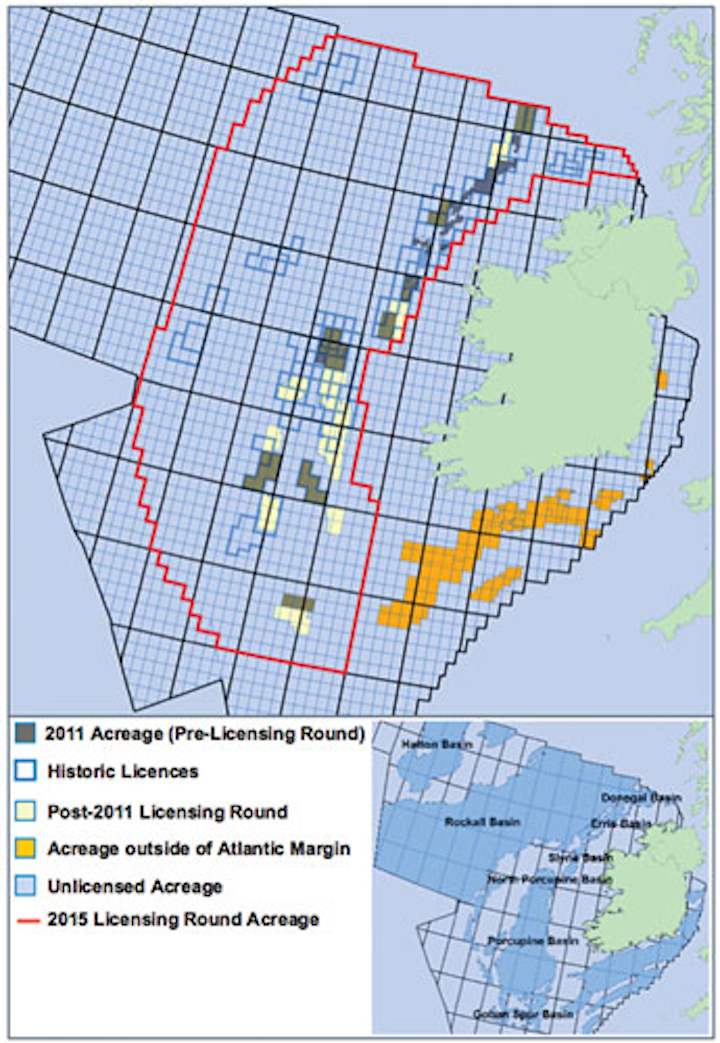 The Irish offshore Atlantic Margin is one of the final frontier regions in northwest Europe and one that is largely underexplored. However, there are signs that this may change as a result of improvements in Ireland’s fiscal regime, advancements made in understanding the geology, and technological advances.

Recent successful exploration on the conjugate margins of the Atlantic - offshore Canada in the west, the west of Shetland region to the north, and West Africa to the south – has drawn attention to the prospectivity of theIrish Atlantic Margin. There is a sense of anticipation as the Sept. 16 deadline approaches for Ireland’s 2015 Atlantic Margin Licensing Round, with all the basins opened for licensing.

The margin can be divided into the inward basins – Porcupine, Slyne, Erris, Donegal – and the outward Rockall basin and associated perched basins. The geological evolution of these basins has been relatively poorly understood, although recent major studies by the governments of the countries and provinces bordering the North Atlantic have made significant strides toward developing a coherent regional picture.

The presence of Permian and Triassic salt and Tertiary basalts has, in the past, resulted in reduced seismic quality and clouded understanding of the geology. The margin is also a particularly difficult region in which to operate, with year-round harsh weather conditions and water depths in the Rockall basin reaching 3,000 m (9,842 ft). Nevertheless, working petroleum systems have been proven in the Porcupine, Rockall, Slyne, and Erris basins. Hannon Westwood’s database suggests that Porcupine and Rockall hold the largest estimated yet-to-find recoverable volumes of respectively 7.8 Bboe and 10 Bboe. The Slyne, Erris, and Donegal basins have estimated yet-to-find prospective resources of respectively 1.37 Bboe, 0.75 Bboe, and 0.28 Bboe.

The Irish Atlantic Margin covers an area nearly one and a half times that of the UK equivalent, but in comparison to its neighbor, offshore activity has remained low.

Since the first license was awarded on the Atlantic Margin in 1976, around 60,000 sq km (23,166 sq mi) of acreage has been held under license. The principal focus has been around the Northern Porcupine, Slyne, and Erris basins, while the Southern Porcupine and deepwater, remote Rockall basins remain barely explored. In 2011, the Irish government launched a license round designed to bring most of the Atlantic Margin into play. Acreage on offer covered a total area of 252,500 sq km (97,491 sq mi). Subsequent awards increased the licensed acreage by 8,000 sq km (3,089 sq mi) to 19,500 sq km (7,529 sq mi), and perhaps more importantly, brought seven new players into the sector.

As with other regions offshore Ireland, the Atlantic Margin underwent a burst of activity in the six years between 1977 and 1982, with 26 wells drilled. Over the following 30 years, however, only 28 wells were drilled on the Atlantic Margin, giving a total of 54 exploration and appraisal wells. Although there have been several discoveries, only Enterprise Oil’s Corrib from 1996 has reached commerciality under Shell’s management, and is due to come onstream later this year.

However, while commercial success has proven elusive, there are positives going forward. Forty-three exploration wells have led to eight discoveries, a technical success rate of 19%. This compares favorably with other frontier basins around the world, even with mature basins such as the UK and Norway where average success rates vary between 25% and 45%. In the UK Atlantic Margin the technical success rate is 32%. When the Irish figure is compared with results from the first 43 wells drilled on the UK Atlantic Margin, the volume of resource discovered in the Irish sector is actually better, although the UK’s resource has been revised upward after BP reassessed volumes in its Clair Ridge discovery west of Shetland following a concerted appraisal campaign. However, there is the possibility that a similar re-assessment of existing Irish discoveries could take place.

In the Irish sector, Triassic and Jurassic reservoirs were historically the primary objectives for the majority of wells drilled, accounting for 75% of the targets. But new research on regional link geology is causing the industry to rethink its approach. New companies entering the region are bringing a wealth of experience from the West African margin. The post-rift passive margin play has proven successful to the north in UK fields such as Foinaven and Schiehallion West of Shetland, and has also worked to the south offshore Africa in Ghana’s Jubilee and Mahogany fields; its extension northward into Ireland therefore seems logical.

The ultra-deepwater well 44/23-1 that ExxonMobil drilled in 2013 on the Dunquin North structure in the Porcupine basin is one example of companies employing new concepts and technology to work up a prospect. Providence Resources and Sosina successfully farmed out parts of the acreage containing Dunquin to major players ExxonMobil, Eni, and Repsol to allow the well to go ahead. This level of pre-drill deal activity was unusual but, at the same time, encouraging for the Irish sector. Although the well did not encounter the hoped-for hydrocarbons, it did demonstrate a working hydrocarbon system and underlined the potential of the Atlantic Margin.

In recent years, 2D seismic acquisition has picked up pace. The inward basins of the Atlantic Margin have excellent 2D seismic coverage, much of it shot between 1995 and 2009. The seismic quality naturally varies depending on its vintage, but new reprocessing techniques can provide clearer results. Last year, Harrier Navigation acquired a 4,872-km (3,027 mi) line multi-client 2D regional survey over the South Porcupine basin on behalf of Seabird Exploration. The Petroleum Affairs Division of Ireland also commissioned a regional seismic survey shot by Chinese contractor BGP during 2013-2014 with the objective of providing 2D coverage over parts of the Rockall basin, where data was previously sparse or non-existent. The government-subsidized pre-stack time migrated seismic survey totaled 16,800 km (10,439 mi).

Acquisition of 3D seismic in the Atlantic Margin began in earnest in 2000 (Fig. 3). Of the 43 exploration wells drilled in the region, only 10 have been drilled on post-2000 3D seismic. Recently, two large surveys have been acquired in the Porcupine basin, the first shot by Polarcus on behalf of Kosmos on the eastern margin. The second was a 2014 Polarcus multi-client survey with a footprint of more than 4,300 sq km (1,660 sq mi). It covered Providence-operated acreage that included the Drombeg prospect and unlicensed acreage available under the current licensing round. In 2014, Dolphin Geophysical also acquired 3D seismic on behalf of Cairn Energy-subsidiary Capricorn Ireland, south of the Spanish Point Discovery.

In the future, exploration wells are more likely to be drilled based on interpretation of superior quality 3D seismic than on older, poorer quality 3D or 2D data and, theoretically, the chance of finding a commercial accumulation will be higher.

In advance of the 2015 Atlantic Margin Licensing Round, the Irish government revised its fiscal regime for the petroleum industry in an attempt to stabilize the Irish taxation system and encourage investment in offshore exploration. Ireland’s revamped fiscal regime comprises of a combination of corporation tax (CT) and petroleum production tax (PPT). New fiscal terms will apply to the 2015 round, but will not be applied retrospectively to existing licenses.

Within the new terms, PPT is charged on a field-by-field basis with the rate varying between 0 - 40% according to field profitability, although a minimum rate of 5% will function as a royalty to the state. The CT rate remains at 25%, however, PPT is now deductible against CT. Capital allowances include accelerated depreciation and immediate write-off for 100% exploration and development costs once the field commences production; a provision also allows for a deduction for expenditure that companies may incur in withdrawing from or shutting down an oil or gas field. Furthermore, investment incentives include the option for losses to be carried forward indefinitely, with further incentives for research and development. There are no incentives for unconventional oil and gas, and there are no direct incentives for exploration.

The maximum headline tax rate range increases to 28.75% - 55%, when compared with a previous rate of 25% - 40%. While these headline rates are higher than under the previous system (due to the deduction of PPT against CT), this system is in fact more generous to smaller, potentially less commercially attractive fields. Under the previous system, a profit resource rent tax of 10% equated to a headline tax of 35%, but under the new system, a PPT of 10% equates to a headline tax of 32.5%.

Even with the potential of increased tax, Ireland has a lower comparable government take compared with peer group countries. It is very favorable to oil companies when compared to the UK rate of 50-75% and a Norwegian rate of 78%.

Hannon Westwood currently recognizes 54 prospects in the Rockall basin, which was first opened for licensing in 1997. Only three wells have been drilled in the Irish sector on the eastern margin, one of which resulted in the Dooish discovery. Hannon Westwood has developed software that can produce a breakeven model that determines the lowest possible oil price at which a prospect can be developed economically.

The model takes the following factors into consideration: P50 resource estimate, water depth, tax regime, and development costs (both capex and opex). Stand-alone development costs for the prospects have been calculated using field analogues from the North Sea based on reserve size and reservoir target. Of the 54 unlicensed prospects, 42 were included in the model after the application of a 30 MMboe cut-off. The software analyzes each prospect as a single entity and does not recognize dual reservoir targets or the potential for cluster development.

In total, the model identified 32 prospects as breakeven or better at the recent oil price of $60/bbl. The model shows that in the success case, 7.5 Bboe out of an estimated 10 Bboe could be economically extracted from the Rockall basin, despite the associated expense of deepwater drilling, and high capex and opex associated with probable stand-alone field developments (and the relatively low oil price).

Improved seismic acquisition and reprocessing techniques, along with continued research are unlocking our understanding of the Irish Atlantic Margin basins and their related prospectivity. Exploration and development options are also benefiting from advances in technology that are currently being applied in deepwater in the Gulf of Mexico and shallower water in the Barents Sea. This technology is becoming more efficient and less expensive, facilitating exploration in more challenging environments and ultimately leading to greater oil recovery.

In addition, companies are applying new exploration and development ideas in order to unlock the potential of the Atlantic Margin. Many of the companies holding Irish acreage have had experience working in similar operating conditions west of Shetland and have an understanding of how to overcome such development challenges. Alternatively, they have had success with analogous plays on the conjugate margin off the coast of West Africa and are now chasing these plays off the Irish coast.

The Irish government has placed Ireland in a promising position in advance of the 2015 Licensing Round by making available the subsidized regional seismic survey and introducing a favorable fiscal regime for both the Irish people and oil companies. All elements are in place to transform Ireland from one of the last frontiers to a hub of exploration with a strong offshore industry and the potential to supply the country with reliable sources of energy. •