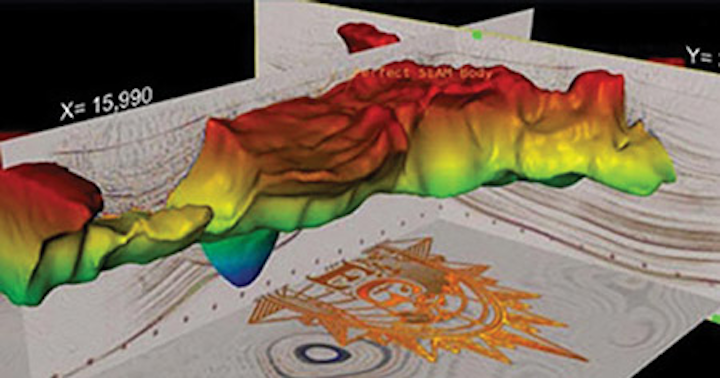 Recognition of problems with subsalt imaging is decades old. While difficult, subsalt exploration and production are succeeding and with increased pace of success due to technology.

BP is one of the early Gulf of Mexico subsalt explorers, starting more than 15 years ago. After finding subsalt reserves using the techniques available at the time, BP embarked on a research and development track to improve its understanding of the salt discoveries. BP's investigations took the company into seismic imaging, data processing, velocity model construction, and more. One result was a determination that there just was not sufficient data.

As early as 2004, BP was investigating the idea of wide-azimuth towed streamer data acquisition, and the first GoM application was at Mad Dog. BP wanted better seismic results to contribute to production planning. That led to numerical simulation, high-performance computing, and a drive to denser data, more traces per square mile, larger receiver spreads than standard, and ultimately to what is now called wide-azimuth towed streamer technology. This solved the problem of distortions created by salt canopies by mounting the source and receiver of sound waves on separate vessels, rather than on one.

Other imaging improvements come from removing as much noise as possible from the input data without affecting the signal, and applying new technologies such as post-migration multiple attenuation, tilted transverse isotropy modeling, reverse time migration with delayed imaging time scans.

Research and development into more novel geological interpretation tools is on-going. One organized endeavor is SEG Advanced Modeling (SEAM). SEAM began under the Research Partnership to Secure Energy for America's (RPSEA) Ultra-Deepwater Program. The first phase resulted in a deepwater subsalt earth model designed to capture as much data as needed to produce a 3D model relevant to oil and gas exploration. The 3D model covers a 40 × 35 × 15 km (24.9 x 21.7 x 9.3 mi) area with a complex salt intrusive in a folded Tertiary basin. The primary deliverable was the seismic data set of variable density acoustic simulations consisting of 200 TB of uncompressed traces for more than 60,000 shots. Also delivered were several smaller compressed subsets of these data intended for easier handling, simpler distribution, and better comparison of imaging tests results.

The project goal is to develop a suite of synthetic geophysical datasets over an existing SEAM numerical earth model that represents a 60-block subsalt exploration area in the deepwater GoM. The datasets are to include acoustic and elastic seismic, controlled source electromagnetic, magnetotelluric, and gravity data. These datasets will be used to develop best practices for acquisition and processing of geophysical imaging data in difficult to illuminate regions of salt bodies.

Despite the difficulties and because of the technological advancements, subsalt exploration continues to expand. Perhaps the best known salt exploration country, Brazil has established a state-owned entity to manage the exploration. Pre-Sal Petroleo, with Mines and Energy Ministry oversight, will manage exploration at the Libra field.

Among the recent subsalt discoveries is Statoil's Yeti prospect in the GoM Walker Ridge block 160. Statoil has said Yeti expands the proven subsalt Miocene play south and west of Big Foot. Statoil is analyzing Yeti data to improve its understanding of field size and to contribute to appraisal planning.

West Africa, particularly ultra-deepwater subsalt offshore Angola is in the fray, too, but at a very early stage. It will take some time to understand the new basin's geology, but because there are proven reserves, that understanding is going to improve over time.

For example, ConocoPhillips' Kamoxi-1 exploration well in block 36 in the Kwanza basin was drilled to a TD of 22,660 ft and P&A'd as dry. Even as a dry hole, the company decided the potential in subsalt offshore Angola is high enough to warrant additional attention. •