CGG and BOURBON signed an industry-first, five-year charter agreement for six purpose-designed seismic support vessels to be built and delivered in series. The new vessels, fitted with hybrid propulsion systems, are designed for multiple tasks including personnel transportation for crew rotations; bunkering operations; operational protection and assistance; and support during maintenance. 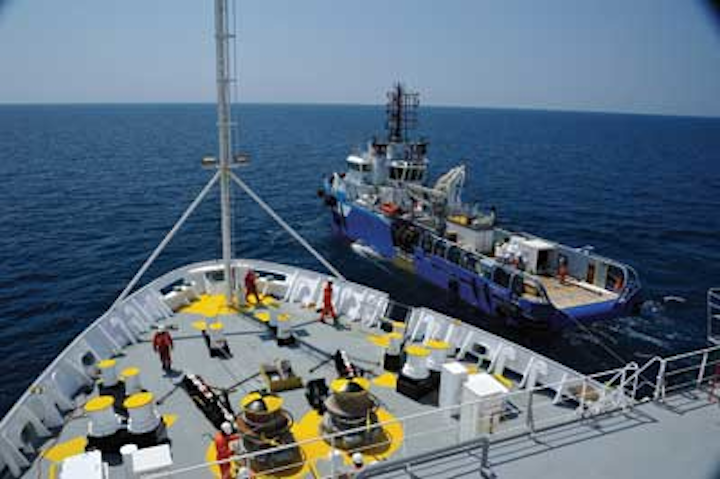 One example of how contractors and vessel operators are addressing modern demand is an agreement between CGG and BOURBON on a new seismic support vessel design and operations program.

CGG currently operates 20 seismic vessels. Each vessel operates a seismic data acquisition spread of between eight and 14 streamers, with the most powerful, high-end vessels capable of towing up to 20 streamers. These streamers, incorporating sensors, are towed 100 m (328 ft) apart and can be up to 12 km (7.4 mi) long, making the vessel's overall footprint up to 1.5 km (0.9 mi) x 12 km (7.4 mi).Seismic vessels, sailing at a speed of 5 knots/hour, are limited in their maneuverability during spread tow, and may go as much as 21⁄2 years between consecutive stops.

These factors make operational performance and HSE paramount. If one of the fleet undergoes an unexpected loss of power, without a support vessel able to mobilize quickly and efficiently to provide backup towing capabilities, tens of millions of dollars of equipment at sea will be at risk. The same is true when refueling becomes an issue.

CGG and BOURBON signed an industry-first, five-year charter agreement for six purpose-designed seismic support vessels to be built and delivered in series. The new vessels, fitted with hybrid propulsion systems, are designed for multiple tasks, the main ones being personnel transportation for crew rotations; bunkering operations; operational protection and assistance; and support during maintenance.

Additionally, each vessel is equipped with an on-deck davit and an on-deck crane. The towing capacity of 42-ton bollard pull and the quick release towing hook of 70-ton (safe-working load) allow the seismic mother ship to safely conduct maintenance operations on her propulsion while under preventive tow.

The first vessel of the series, theBourbon Petrel, started operating in the Black Sea in summer 2013. She conducted towing exercises and one towing operation for maintenance purposes, along with numerous crew rotation missions and refueling operations. The latter included an inline bunkering operation. Refueling can be performed either alongside the vessel or inline, although inline refueling helps widen the scope of operations as alongside operations may represent a risk in marginal sea conditions.

Two years after the start of this partnership, theBourbon Petrel, the Bourbon Fulmar, and the Bourbon Gannet have been delivered and are supporting streamer vessels in northern Europe and western Africa. A fourth vessel, the Bourbon Grebe, will join the fleet soon, while the other two vessels in this series will be delivered in 2014.