Sitting just north of the giant Cantarell field, the Campeche Escarpment basin offshore Mexico is a surprisingly still unexplored deepwater province with extensive presalt and postsalt hydrocarbon potential. This basin is now recognized as an exciting exploration target with presalt syn-rift structures analogous to many prolific plays on the Atlantic margins. 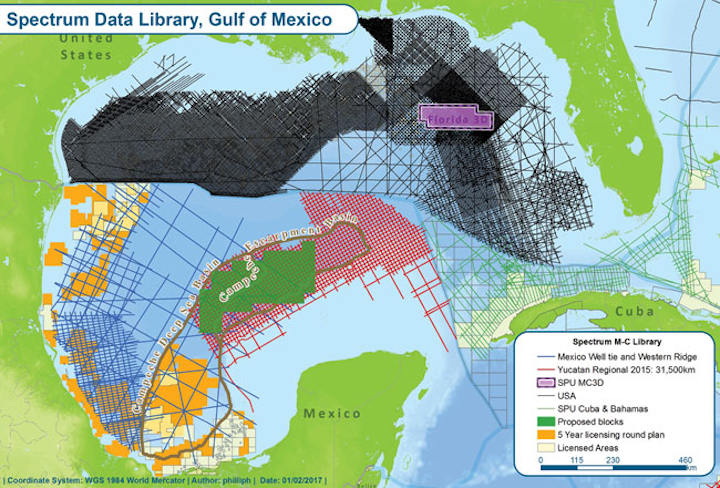 Sitting just north of the giant Cantarell field, the Campeche Escarpment basin offshore Mexico is a surprisingly still unexplored deepwater province with extensive presalt and postsalt hydrocarbon potential. This basin is now recognized as an exciting exploration target with presalt syn-rift structures analogous to many prolific plays on the Atlantic margins. An attractive emerging play in the Gulf of Mexico (GoM) is the Norphlet postsalt aeolian sandstone overlying autochthonous salt. Here, Spectrum believes a similar play is found in the Campeche Escarpment basin over an area covering approximately 50,000 sq km (19,305 sq mi).

In 2016, Spectrum completed a long-offset 2D seismic survey offshore Mexico in a collaborative effort with PGS and Schlumberger. The survey provides seamless broadband seismic coverage across the GoM from the Yucatan Platform in the southeast to the Perdido fold belt in the northwest, tying key wells in producing hydrocarbon basins and sampling emerging presalt and postsalt plays. The survey comprises a total of 63,000 km (39,146 mi) of data spanning the Perdido fold belt, Western Ridges, Campeche basin, Yucatan Platform, and Campeche Escarpment basin.

Tectonic models for the GoM have until recently been limited by the lack of magnetic spreading anomalies and unevenly distributed geophysical data, resulting in uncertainties in opening kinematics and continent ocean boundary proposals. Recent potential field data integrated with seismic and well data has supported a new plate reconstruction model, revealing an extinct spreading ridge which, together with a pole of rotation derived from the geometry of the ridge transform segments, has allowed reconstruction of the Yucatan block to its pre-drift position. This has been used by Spectrum in G-Plates to obtain a plate model at the time of deposition of the Louann salt and Campeche salt basins, 152 to 156 Ma.

Based on this reconstruction, the Lloyd Ridge-1 well, drilled in 2004, was tied from seismic data on the Eastern GoM to the conjugate margin seismic line from the Yucatan survey. Wilcox (Eocene to Paleocene), Cotton Valley, Haynesville, and Upper Jurassic formation tops were used to divide the Yucatan survey data into three main seismic sequences of Jurassic/Triassic, Cretaceous/Jurassic and Tertiary ages.

Mexico’s Cantarell complex, the world’s 10th largest hydrocarbon field, was actually discovered by fishermen reporting “annoying oil” in their fishing nets over this area. Sea surface slicks can be charted over large areas from observations from satellite imagery over the Campeche Escarpment and Campeche Deep basins. In 2016, Spectrum completed a study to complement the seismic acquisition program.

Persistent slick clusters found in the Cantarell region are known to be connected to the Cantarell discoveries. With a similar distribution pattern, slicks in the northwestern Isthmus salt province are believed to be naturally occurring oil seeps and provide strong evidence that the Cantarell oil play can be extended westwards into the Campeche basin region. More significantly, north of the Campeche basin, abundant tight clusters of oil slicks have been interpreted associated with the Sigsbee Knolls. It is clear that these slick clusters are closely related to salt diapirism and indicate that a thermogenic hydrocarbon system is present in the Campeche basin that is mature for oil and is generating oil in large volumes. Geochemical sampling from the Chapopote asphalt volcano indicates that at least some of these oils are generated from Jurassic source rock (Naehr et. al, 2007).

Present day ergs (sand seas or dune seas over areas greater than 30,000 sq km/11,583 sq mi) are widely distributed over the Sahara Desert. Climate models indicate that late Jurassic climate was similar to the modern Sahara over the GoM where the Norphlet and Ek-Balam ergs were deposited. These aeolian sandstone deposits have established production in postsalt traps, either as Jurassic, which translated basin-ward detaching on the Louann salt for the Norphlet play, or extensional growth faults associated with upward-moving salt for the Ek-Balam play.

In the Campeche Escarpment basin, a series of raft blocks detaching along what has been interpreted as the base of a mostly evacuated salt, have been identified. The rafts are separated by salt ridges and/or extensional fault gaps in a very similar manner to the rafts associated with the Norphlet play.

The gravity mega-slide containing Norphlet-age sandstone has been identified and mapped in both the strike and dip directions. This sandstone, mapped at an erg-scale trend over the Campeche Escarpment basin, has been named Pikit (meaning “fan” in Mayan), as the interpretation of the top and base of the gravity slump feature displayed in map view, resembles the shape of a fan extending over an area of around 50,000 sq km (19,305 sq mi).

Recent plate reconstruction models indicate the eastern GoM and the Campeche basin were conjugates during the deposition of the Louann and Campeche salt basins. This has been used to constrain ages of the main seismic sequences mapped over the Yucatan survey area.

Using oil seeps, a working petroleum system has been identified in the Campeche Escarpment basin. The source rock is likely to be Jurassic in age, as indicated by samples from the Chapopote asphalt volcano. The number and quality of seep clusters indicates a significant amount of oil generation.

A potentially large presalt play is indicated with considerable presalt syn-rift structures observed underlying autochthonous salt. In the postsalt section, a very likely Norphlet analogue has been revealed and interpreted within a series of gravity slides extending over an area of 50,000 sq km (19,305 sq mi). It has been named Pikit for its fan shape in map view.

Hugely prospective sections have been recognized in Tertiary, Cretaceous, and Jurassic sequences in the largely unexplored Campeche Escarpment basin. Mexico’s Ministry of Energy is considering including this area in a future licencing round, given the compelling evidence of significant hydrocarbon potential.

With oil prices on the rise, this is expected to be one of the most popular hydrocarbon provinces to be targeted by oil companies in the near future.